Intrahepatic cholangiocarcinoma (ICC) is a rare and aggressive primary liver malignancy. In the United States, the incidence of ICC is estimated at 1.2 cases per 100,000 person years (1). Surgical resection for ICC represents the only curative option; however, ICC is frequently diagnosed at advanced stages, precluding resection. Historically survival in ICC has been poor. Even with curative intent surgical resection, median survival is 28 months and 5-year overall survival is 30% (2).

Due to the rarity of the disease, there is minimal level one evidence to guide clinical management of patients with ICC and there is no clinical consensus on the appropriate use of neoadjuvant and adjuvant treatment. There is conflicting data from randomized controlled trials as to the benefit of adjuvant chemotherapy in resected biliary tract cancers (3-6). While it is known that positive lymph nodes (LN), advanced T stage and positive surgical resection margins are poor prognostic factors (2,7-12), a recent meta-analysis found no additional benefit to adjuvant chemotherapy or radiotherapy in patients undergoing surgical resection (2). However, some subgroup analyses have suggested that patients with advanced T stages or large tumors, positive margins and/or positive LNs, may derive a survival benefit from adjuvant chemotherapy (13-15). In order, to further evaluate the utilization and role of adjuvant chemotherapy for resected ICC in current clinical practice, a large population-based data set was analyzed to characterize chemotherapy utilization in ICC over the last 15 years and to determine whether or not changing practice patterns may have impacted survival.

Patients age 18 years or older who were diagnosed with ICC from 2000–2014 were identified using the World Health Organizations’ International Classification of Disease, 3rd edition (Table S1). Patients were included if they underwent a therapeutic intent surgical resection for ICC (Table S2). Patients with metastatic disease or those whom received radiation therapy as a component of first-line therapy were excluded. The study was exempt from review by the Institutional Review Board of the University of Minnesota as only de-identified patient data was used. 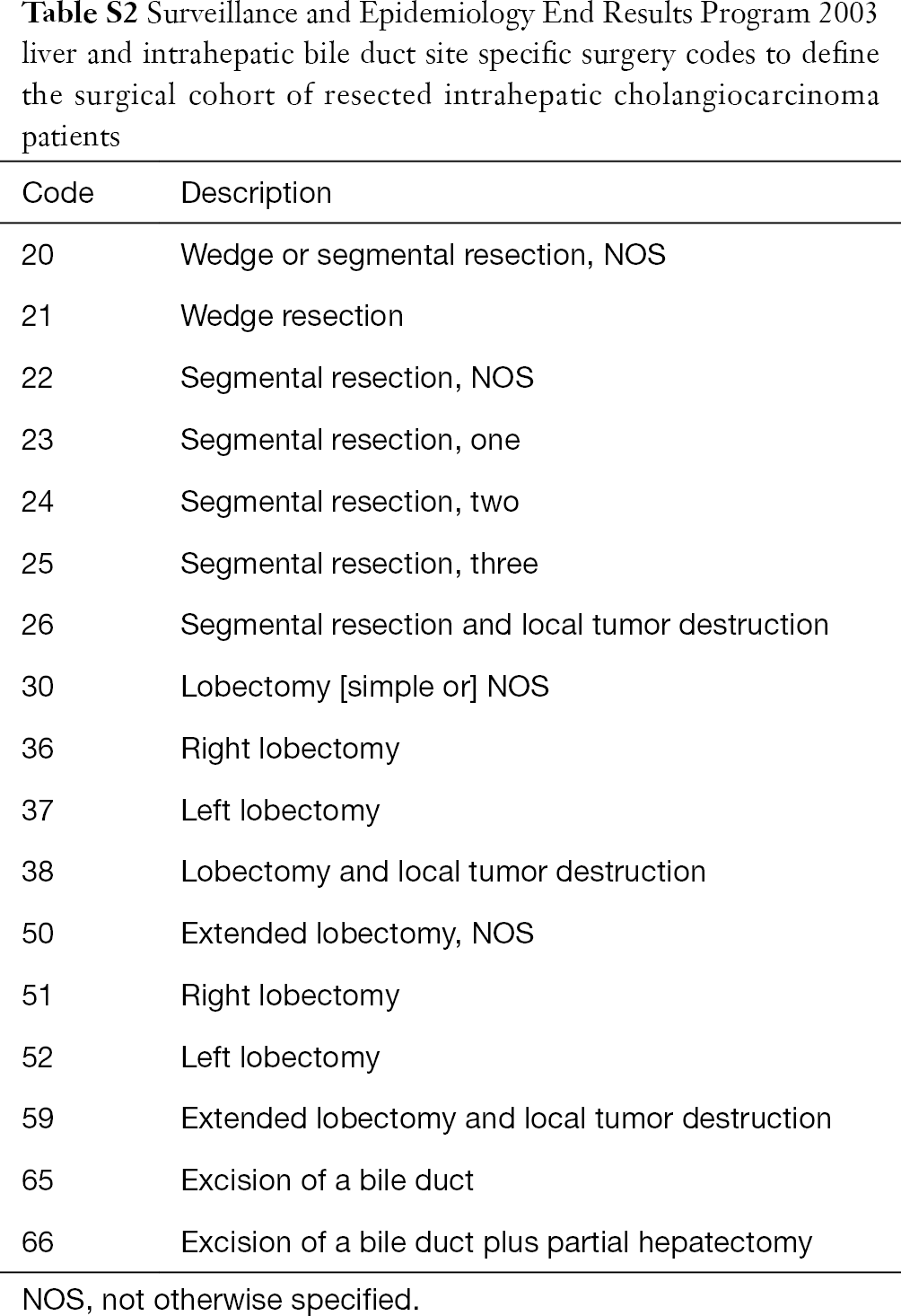 Patients were stratified into three cohorts based on date of diagnosis, 2000–2004, 2005–2009, and 2010–2014. Patient, tumor, and treatment characteristics as well as survival was analyzed for all three groups. A 2-sided chi-square test and Cochran-Armitage test for trend were used to compare patient characteristics and chemotherapy utilization rates during the 15-year period. Multivariable analysis of factors associated with the receipt of chemotherapy was performed on patients in each time period. Kaplan-Meier survival curves and Cox proportional hazard ratio (HR) models were performed to evaluate overall survival. Statistical significance was considered as P≤0.05. All statistical analysis was performed using SAS software, version 9.3 (SAS Institute, Cary, NC, USA). 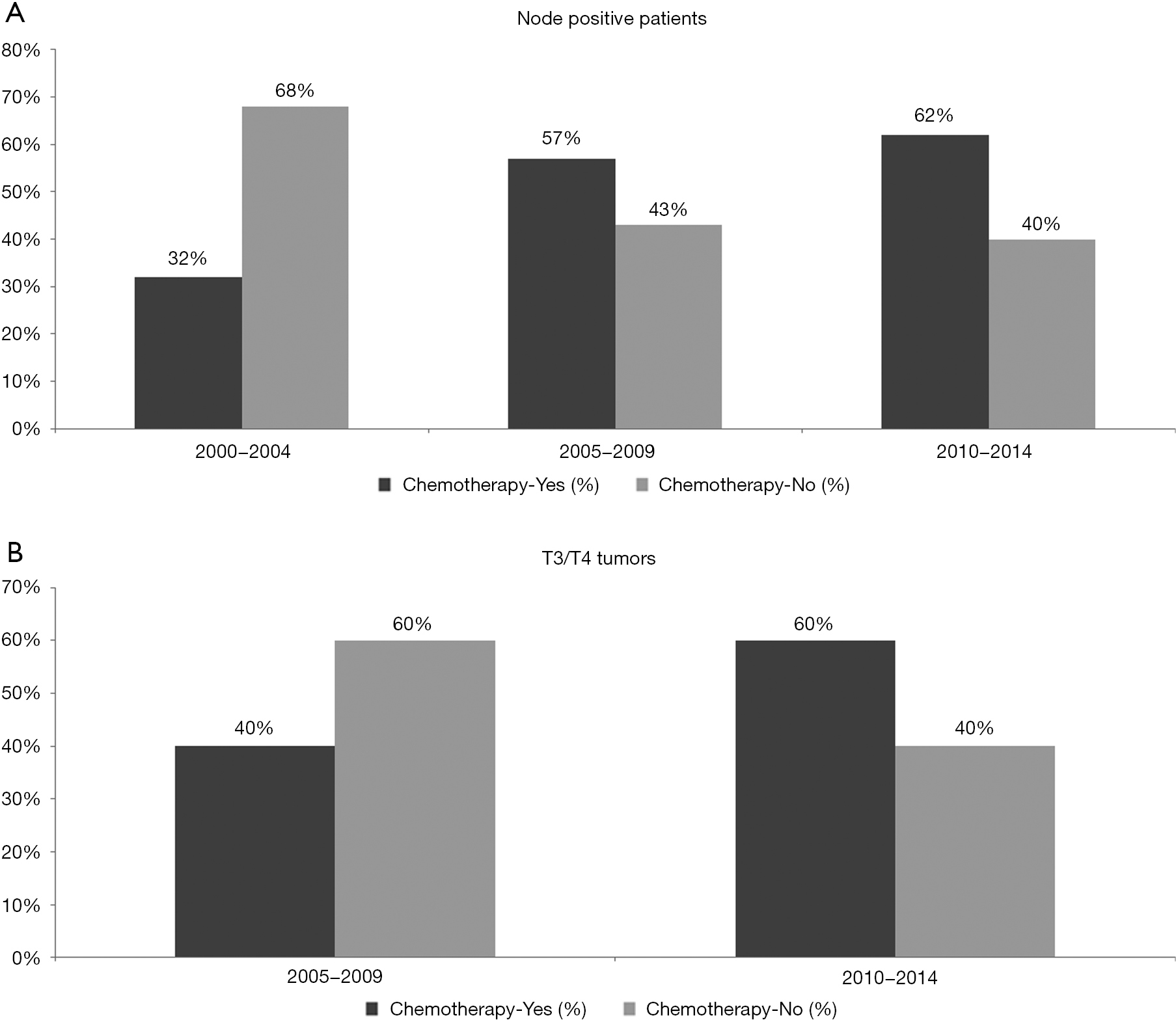 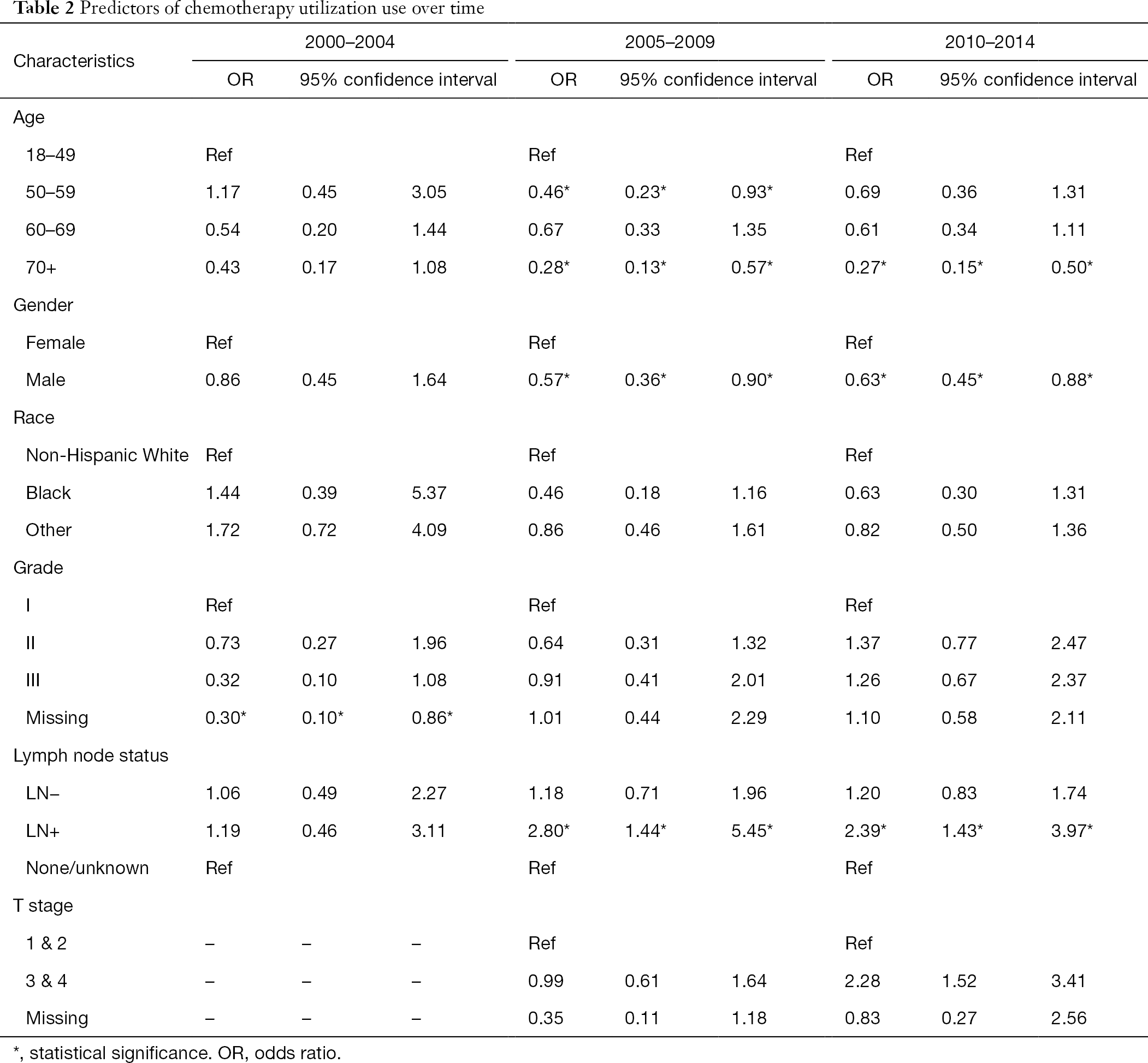 Table 2 Predictors of chemotherapy utilization use over time
Full table

ICC has a high rate of recurrence and poor overall survival when treated with surgical resection alone, highlighting the importance of adjuvant therapies. The ABC-02 trial evaluated chemotherapy in advanced biliary tract cancer and found a survival benefit of 3 months for combination gemcitabine and cisplatin over gemcitabine alone (17). The study included patients with advanced biliary tract cancers, less than 60% of whom had cholangiocarcinoma and only 20% of patients were initially treated with curative intent surgery (17). Two recent randomized controlled trials looked at the role of adjuvant chemotherapy specifically. The BILCAP study was intended to more clearly define the role of adjuvant chemotherapy in biliary tract tumors by randomizing patients after upfront curative intent resection to receive either capecitabine or observation alone (6). After a median follow-up of 60 months, there was no significant difference in overall survival when analyzed under an intention-to-treat analysis—though interpretation of the results of the study have sparked much controversy (6,18).The Prodige 12 trial evaluated adjuvant gemcitabine and oxaliplatin and found no significant difference in recurrence free survival between the two arms, with a median follow-up of 46.5 months (5).

Previous studies have attempted to clarify the efficacy and role of chemotherapy in the adjuvant setting by retrospectively analyzing large data sets. Most studies have found that adjuvant chemotherapy was not associated with improved survival when the entire cohort of surgically resected ICC patients was analyzed (2,13). Multiple studies have determined that positive LN status, advanced T stage and positive surgical resection margins are all poor prognostic factors (2,7-12). Additional studies have shown an association between the use of adjuvant chemotherapy and improved survival when administered to the subgroup of patients with poor prognostic factors (13-15,19,20). For example, Miura et al. analyzed 2,751 patients in the National Cancer Database and found that the addition of chemotherapy was associated with a survival benefit only in patients with positive LNs, advanced T stages and positive resection margins (14). This was replicated in a large review of the SEER database (13). Further, a systematic review encompassing over 6,000 patients with biliary tract cancer found no significant improvement in overall survival with adjuvant treatment, except for in patients with high-risk features (positive margins and positive LNs) (21). The current study, redemonstrated that patients with LN positive or T3/T4 disease have worse overall survival, and suggests that the increased utilization of chemotherapy over time in these subgroups of patients may help explain the improvements noted in overall survival.

Despite LN positivity being an important factor to help determine which patients may benefit from chemotherapy as demonstrated in this and prior studies (11,13,14,21,22), the rate of any lymphadenectomy in the SEER database was only 52.1% during the period of study, and did not change over the 15-year time period. Previous studies have reported low rates of pathologic LN evaluation in ICC, with only 10% of patients undergoing an adequate [defined as 6 or more LN evaluated (23)] lymphadenectomy (13,24). Selective, inadequate and omitting lymphadenectomy in patients with ICC may result in nodal under-staging and possibly under treatment with adjuvant therapy.

Due to the sparsity of strong level one evidence, current National Comprehensive Cancer Network guidelines are not specific with respect to adjuvant treatment (25). For patients without evidence of residual disease, either observation, clinical trials or chemotherapy are acceptable options. In patients with microscopic residual disease or positive LNs, recommendations include enrollment in a clinical trial or chemotherapy with or without chemoradiation. Hopefully, the ongoing ACTICCA-1 trial, which initially randomized patients to observation or adjuvant gemcitabine-cisplatin after curative intent resection will help clarify the role of adjuvant chemotherapy (26). However, due to the rarity of biliary tract tumors, randomized trials uniformly include patients with ICC, extrahepatic cholangiocarcinoma, and gallbladders cancer. For instance, the Prodige 12 trial included only 86 patients with ICC while the BILCAP trial included only 84 patients (5,6). Although this improves the study’s statistical power, this practice may not be clinically appropriate, particularly in light of emerging data that genetic mutations differ across these distinct biliary tract cancers (27).

Although this is a robust, population-based study on chemotherapy in surgically resected ICC, it is important to acknowledge some of the study’s limitations. As a review of a large population dataset, it is subject to retrospective and reporting biases. Furthermore, as a retrospective study it is subject to selection bias as there is no randomization of treatments cohorts. Also, using the SEER database there were a significant number of missing values, particularly for T stage in the early cohorts. The SEER database also does not specify the date of chemotherapy, the specific agents/drugs given, or any details about the duration of therapy. Lastly, SEER does not report resection status or contain information on recurrence status. Resection margin status is an important prognostic indicator in resected ICC and likely factors into adjuvant treatment decisions. Nonetheless, given the rarity of ICC, this is a large study evaluating adjuvant chemotherapy for ICC over-time in the United States.

Despite these limitations, this study suggests that clinicians are administering chemotherapy with increased frequency to patients with poor prognostic features following surgical resection of ICC. Specifically, clinicians are increasing chemotherapy utilization in patients with LN positive disease or T3/T4 tumors, while the utilization of chemotherapy among patients with LN negative disease or T1/T2 tumors has remained stable. Furthermore, the increased utilization of chemotherapy in patients with poor prognostic features may partially explain the improvement in overall survival over the last 15 years. It is likely that the previous retrospective studies have influenced clinical management contributing to this shift, as robust definitive level one evidence is still lacking. The data from this study suggests that the oncologic community is moving towards a clinical practice consensus on the use of adjuvant chemotherapy for ICC, but is undoubtedly awaiting further clarity that can only be provided by well-designed, robust randomized clinical trials.

The authors of the manuscript would like to acknowledge Stephanie Lundgren and the Division of Surgical Oncology at the University of Minnesota for assistance in the production of the manuscript.

Reporting Checklist: The authors have completed the STROBE reporting checklist. Available at http://dx.doi.org/10.21037/hbsn.2019.06.12

Conflicts of Interest: All authors have completed the ICMJE uniform disclosure form (available at http://dx.doi.org/10.21037/hbsn.2019.06.12). The authors have no conflicts of interest to declare.

Ethical Statement: The study was exempt from review by the Institutional Review Board of the University of Minnesota as only de-identified patient data was used. The authors are accountable for all aspects of the work in ensuring that questions related to the accuracy or integrity of any part of the work are appropriately investigated and resolved.