Immunotherapy utilization for hepatobiliary cancer in the United States: disparities among patients with different socioeconomic status

Hepatobiliary cancer (HBC) consists of primary liver malignancies including hepatocellular carcinoma (HCC), gallbladder cancer (GBC), as well as cholangiocarcinoma (1-3). In the United States (US), the incidence of HCC and biliary tract cancers has been steadily increasing due to the high prevalence of chronic hepatitis and the epidemic of nonalcoholic fatty liver disease (4). In fact, according to a Surveillance, Epidemiology, and End Results (SEER) analysis, there were an estimated 50,650 new cases of HBC in 2016 resulting in 30,880 deaths (5). Although surgery can be potentially curative for patients with early stage disease, patients with advanced HBC disease generally have a dismal prognosis with an expected survival of less than 1 year (6,7). In addition, treatment options are often limited for patients with unresectable or recurrent HBC disease. Specifically, gemcitabine, cisplatin, and sorafenib, an oral tyrosine kinase inhibitor, are the agents most often employed in the setting of advanced HBC disease (7).

Patients who had a diagnosis of HCC, ICC, GBC, or extrahepatic bile duct cancer between January 1, 2004 and December 31, 2015 were identified from the National Cancer Database (NCDB) and were included in the current study. Patients with unknown immunotherapy and/or surgery status were excluded from the analytic cohort. Furthermore, patients with premalignant lesions, neuroendocrine neoplasms, mesenchymal tumors, secondary tumors or American Joint Committee on Cancer (AJCC) clinical Stage 0 tumors were also excluded.

The NCDB is a joint venture of the American College of Surgeons and the American Cancer Society. The NCDB consists of 34 million records collected from 1,500 hospitals nationally that represents 70% of the new oncology cases in the US. The NCDB provides data on demographic characteristics such as age, sex, race, insurance status, income, as well as facility location and type. The NCDB also provides information such as the Charlson-Deyo comorbidity score (CCS), tumor grade, clinical stage, as well as treatment modalities such as chemotherapy, radiation, surgery, and immunotherapy. Patients were identified using the appropriate International Classification of Diseases for Oncology, 3rd edition (ICD-O-3) codes for histology and primary site (Table S1).

Descriptive statistics were presented as median values with the inner quartile range for continuous variables and frequency (%) for categorical variables. Chi-squared tests and Wilcoxon rank-sum test were performed to assess the possible association of categorical and continuous variables, respectively, to receipt of immunotherapy. All variables that were associated with receipt of immunotherapy on bivariate analysis were entered into the multivariable logistic regression analysis. A backwards stepwise model section approach was used to define the final model. To assess discrimination and model goodness-of-fit, the concordance (C) statistic and Hosmer-Lemeshow goodness-of-fit statistic were calculated. Statistical significance was assessed at α=0.05. All analyses were performed using SAS software v.9.4. (SAS Institute Inc., Cary, NC, USA).

Characteristics of patients who received immunotherapy 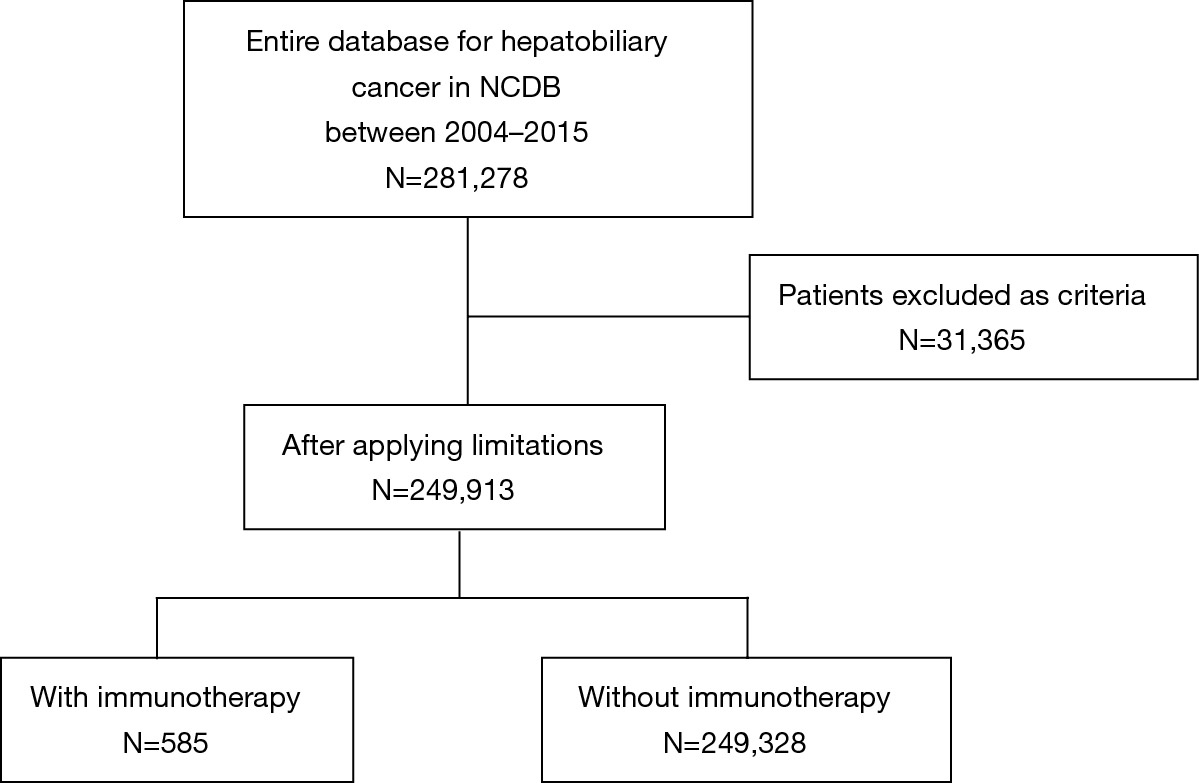 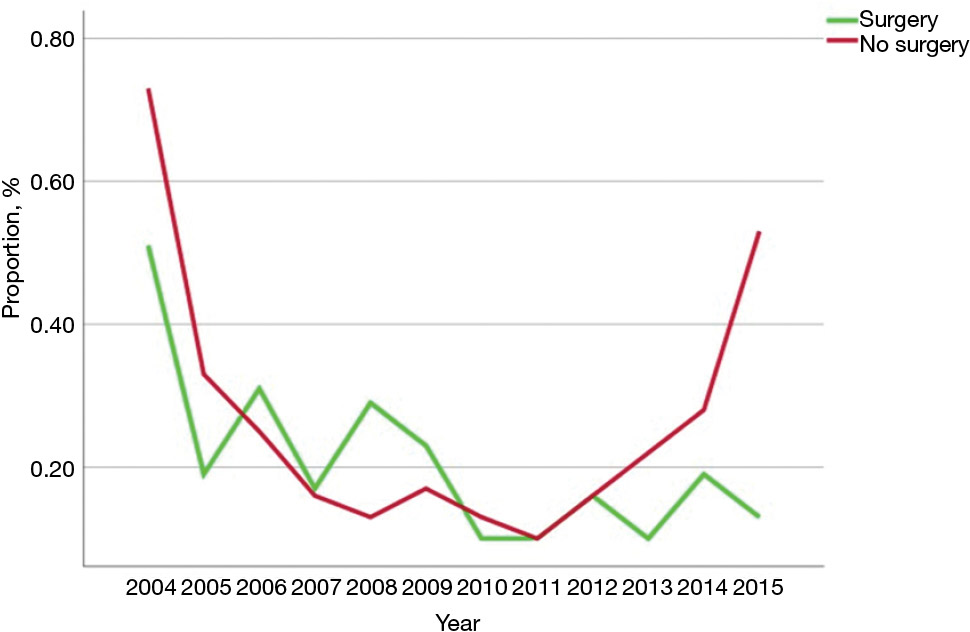 Figure 2 Utilization of immunotherapy over time stratified among patients who did and did have surgery.

Pathological characteristics after surgery relative to the timing of immunotherapy 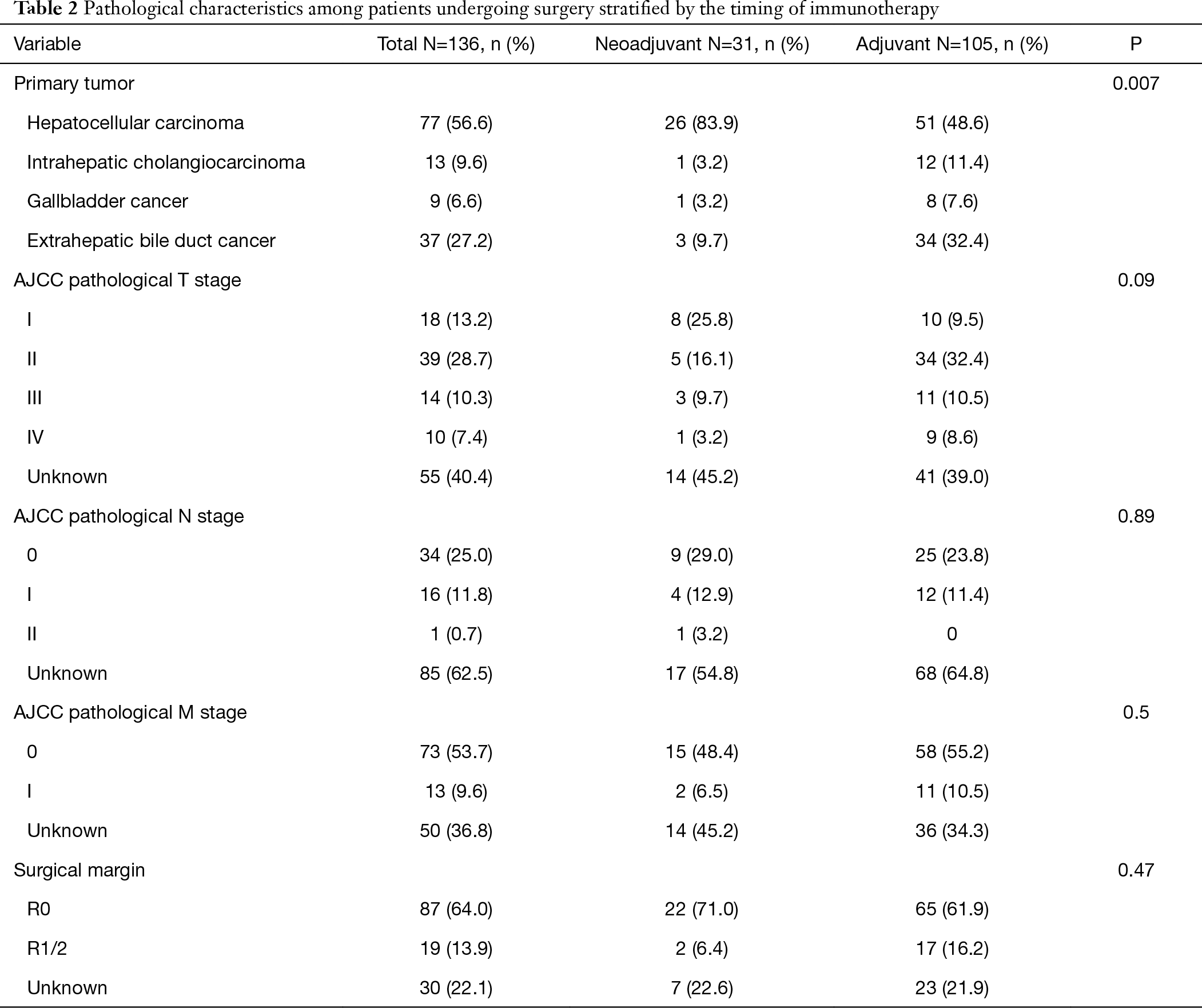 Figure 3 Distribution plots of days from diagnosis for immunotherapy and other therapies among the patients with (A) and without surgery (B) in entire cohort. 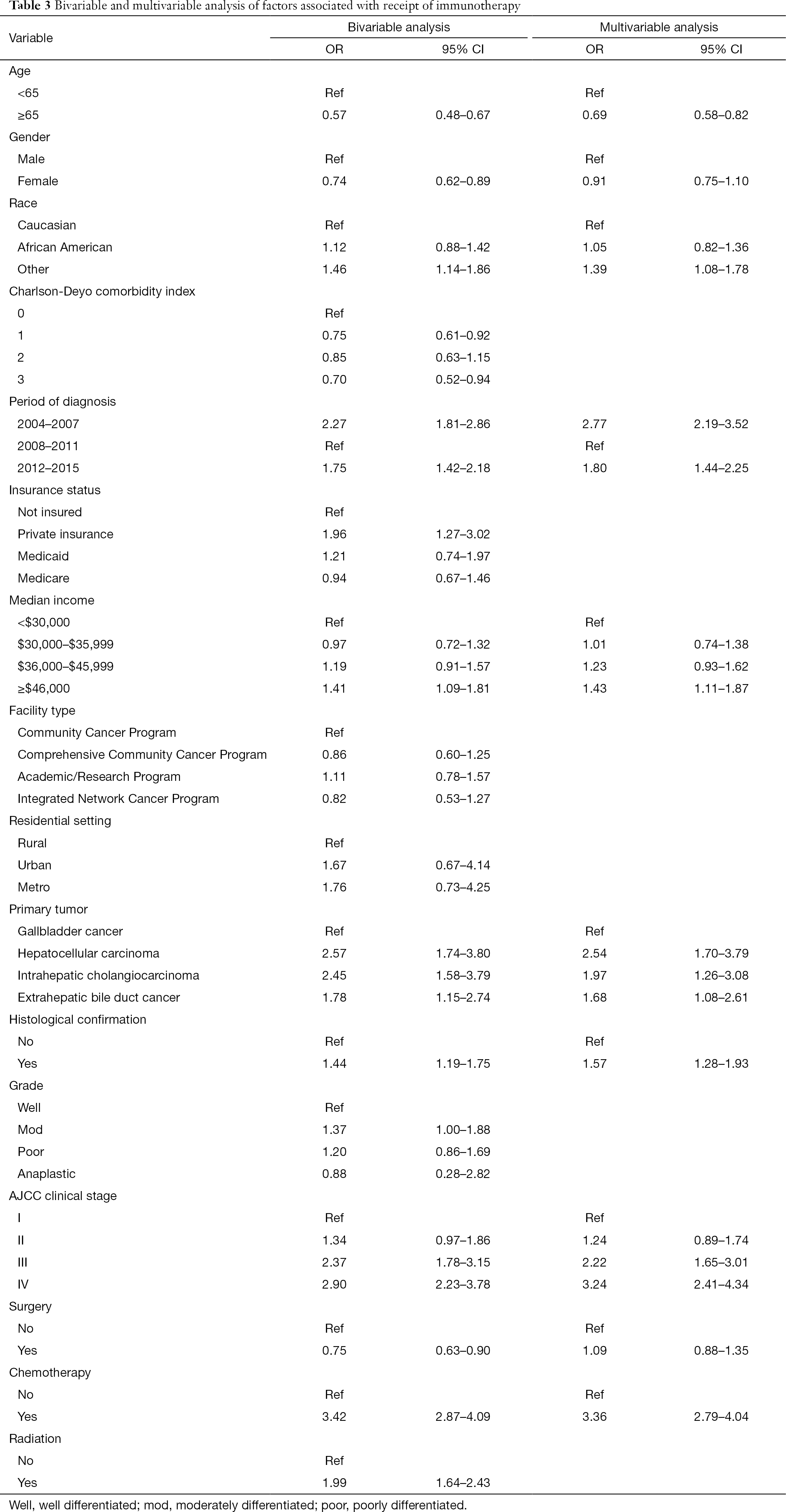 Recent data have suggested that chronic inflammation may contribute to the risk of developing certain solid tumors types (15). HBC, especially HCC, have been associated with chronic inflammation such as viral hepatitis and nonalcoholic or alcoholic steatohepatitis (16). The oncogenesis of HBC in this setting creates a unique ‘tumor microenvironment’ that leads to increased immune evasion and T-cell exhaustion (17). In fact, HCC has been reported to demonstrate high levels of PD-1 expression and immunosuppressive cytokines, suggesting that immunotherapeutic approaches may be useful in the treatment of HBC (15,17-20). While progress has been made in immune-based approaches in the treatment of various other malignancies including melanoma, non-small cell lung cancer (NSCLC), renal and bladder cancer (21-24), immunotherapy has only recently been considered as a therapeutic option for patients with advanced HBC (16). The utilization of immunotherapy has not been studied and data on use of immunotherapy among patients with HBC in the US remain largely unknown. The current study was important because we assessed the overall utilization of immunotherapy among HBC patients, examined temporal trends in the utilization, as well as defined the factors associated with receipt of immunotherapy. Of note, only a very small minority (0.2%) of patients received immunotherapy for HBC with the most common indication being HCC. Perhaps not surprisingly, the majority of patients who received immunotherapy were not surgical candidates (73%), had stage III and IV disease (54.5%) at the time of presentation, and most patients received immunotherapy late in the course of their disease. While receipt of immunotherapy was not associated with insurance status, it was associated with median income and a more recent period of diagnosis.

Several clinical trials are currently evaluating the efficacy of different immunotherapeutic regimens in HBC, including peptide-based vaccines, dendritic cell (DC)-based vaccines and antibodies (25). One phase I/II trial (CheckMate 040) demonstrated that the PD-1 inhibitor nivolumab had an acceptable safety profile and promising efficacy among patients with advanced HCC (26). Based on the results of this trial, the FDA approved nivolumab for the treatment of patients with advanced or metastatic HCC who have previously been treated with sorafenib (16,26). As such, it was not surprising in the current study that most patients who received immunotherapy had a diagnosis of HCC relative to other cancers such as gallbladder or cholangiocarcinoma. However, as the indications for immunotherapy for HBC expand, the number of cancer immunotherapy trials listed on the US National Institutes of Health trial registry for all HBC tumor types has progressively increased over the years (27). While the overall use of immunotherapy was very low in the years examined, we did demonstrate an increased trend in the use of immunotherapy over time especially among patients who were not surgical candidates—with the biggest increase after 2015 (Figure 2). In fact, a more recent period of diagnosis was associated with an 80% increased likelihood of immunotherapy receipt (OR 1.80, 95% CI: 1.44–2.25).

Several factors may influence the availability and quality of cancer care. Structural factors such as health insurance or geographical distance, patient factors such as race, ethnicity, socioeconomic status, stage of disease, as well as other factors such as patient/physician preferences may all impact possible receipt of cancer therapies (28). Ward et al. suggested that although many factors contribute to treatment differences, unequal access to health care for financial or economic reasons may be the most important factor (29). To this point, in the current study, immunotherapy utilization for HBC varied among patients based on socioeconomic status. Specifically, after adjusting for competing risk factors such as tumor stage, higher income patients remained considerably more likely to receive immunotherapy compared with lower income individuals (OR 1.43, 95% CI: 1.11–1.87). Consistent with our findings, Al-Qurayshi et al. similarly noted that private insurance status and higher income level were associated with an increased likelihood or receiving immunotherapy among patients with advanced melanoma (30). Of note, while private insurance status was associated with a higher odds of receiving immunotherapy among HBC patients on unadjusted analyses, this association did not persist once income status was considered in the multivariate model as these covariates were likely colinear. While the cost related to immunotherapy receipt among HBC patients could not be estimated in the current study, other studies have reported that the cost of immune checkpoint inhibitors for melanoma and NSCLC range from $64,000–$145,000 per person per year (31). A separate study noted a cost of $93,000 per treatment for an FDA approved cancer vaccine therapy to treat prostate cancer (32). Given the high cost of immunotherapy, the health care system and insurance plans will need to take into consideration the ramifications of this therapy relative to the potential financial impact on patients.

Several limitations should be considered when interpreting data in the current study. While the NCDB is a large administrative database, some of the data elements are limited including the lack of information on the possible contraindications for immunotherapy such as renal dysfunction, performance status, and patient preference. Similar to previous studies (34-38), the current study included patients with resectable tumors who had favorable prognostic features (i.e., small tumors, negative surgical margins), some of whom may not have traditionally been considered for neoadjuvant or adjuvant systemic therapy. In addition, data on the specific types of immunotherapy regimens, the number of cycles, as well as any associated toxicities among those patients receiving immunotherapy were not available. As data from NCDB were also only available until 2015, we were unable to analyze data for more recent years.

Ethical Statement: The authors are accountable for all aspects of the work in ensuring that questions related to the accuracy or integrity of any part of the work are appropriately investigated and resolved. The study was approved by the institutional research review committee.