The waiting list mortality of patients with end-stage liver disease in most deceased donor-based programs remains significant. With technical refinement, standardization and success of live donor liver transplantation (LDLT), the procedure has proved equally efficacious alternative. However, donor safety with adequate remnant and adequate graft recipient weight ratio (GRWR) remain the utmost concerns in LDLT. An accurate preoperative volumetric assessment of the donor liver is important for both these important considerations (1-3).

In addition to general surgical fitness of the donor, donor hepatectomy requires detailed preoperative assessment of liver steatosis, vascular and biliary anatomy and volumetric assessment of the future liver remnant and liver graft. A liver remnant volume of 30–35% of the original volume is required for the donor safety whereas a minimum of 40% of the standard liver mass, or more than 0.8 GRWR is required for the recipient (3,4). With introduction of automated software for liver volume calculation, volumetric assessment has become less time consuming but their validation in clinical practice is still lacking (5). Although manual CT volumetry is the gold standard, it is time consuming (6). So, this study using semiautomatic method was done to know the over or underestimation of liver volume by CT scan with respect to intraoperative actual graft weight (AGW) in different types of living donor hepatectomy.

A total of 874 LDLT were performed from July 2010 to January 2014. Preoperative CT volumetric data was not available for 11 right lobe (RL), 19 left lobe (LL) and 2 left lateral sector (LLS) grafts, which were excluded from the study. The study cohort consisted of 842 consecutive donors who underwent hepatectomy which included 744 RL, 65 LL and 33 LLS grafts (Figure 1). All donors were adults between the ages of 18 to 55 years. They were evaluated by the same team of radiologists, and surgeries performed by the same team of surgeons. All donors underwent a detailed preoperative evaluation according to our institutional protocol. The protocol consisted of pre-screening to select 18–55 years old, blood group matched relatives followed by a 4-phase evaluation process. Phase 1 consisted of clinical and laboratory tests for systemic function, viral serology, screening for hepatic steatosis by CT scan ± liver biopsy. Those with liver attenuation index (LAI) <0 were rejected, 0–5 underwent a liver biopsy and >5 were accepted. Upper limit of acceptable macrosteatosis was less than 20%. Phase 2 consisted of a contrast CT scan of the abdomen with a triphasic study of liver for vascular anatomy and volumetry (minimum acceptable GRWR 0.7, remnant 32%) and magnetic resonance cholangiopancreatography for biliary anatomy. Phase 3 consisted of tests for systemic evaluation, and Phase 4 consisted of cardiology, pulmonology, gynaecology (in females), psychiatric clearances and legal committee approval. Liver biopsy was done, where applicable, only when donor volumes were found to be adequate. 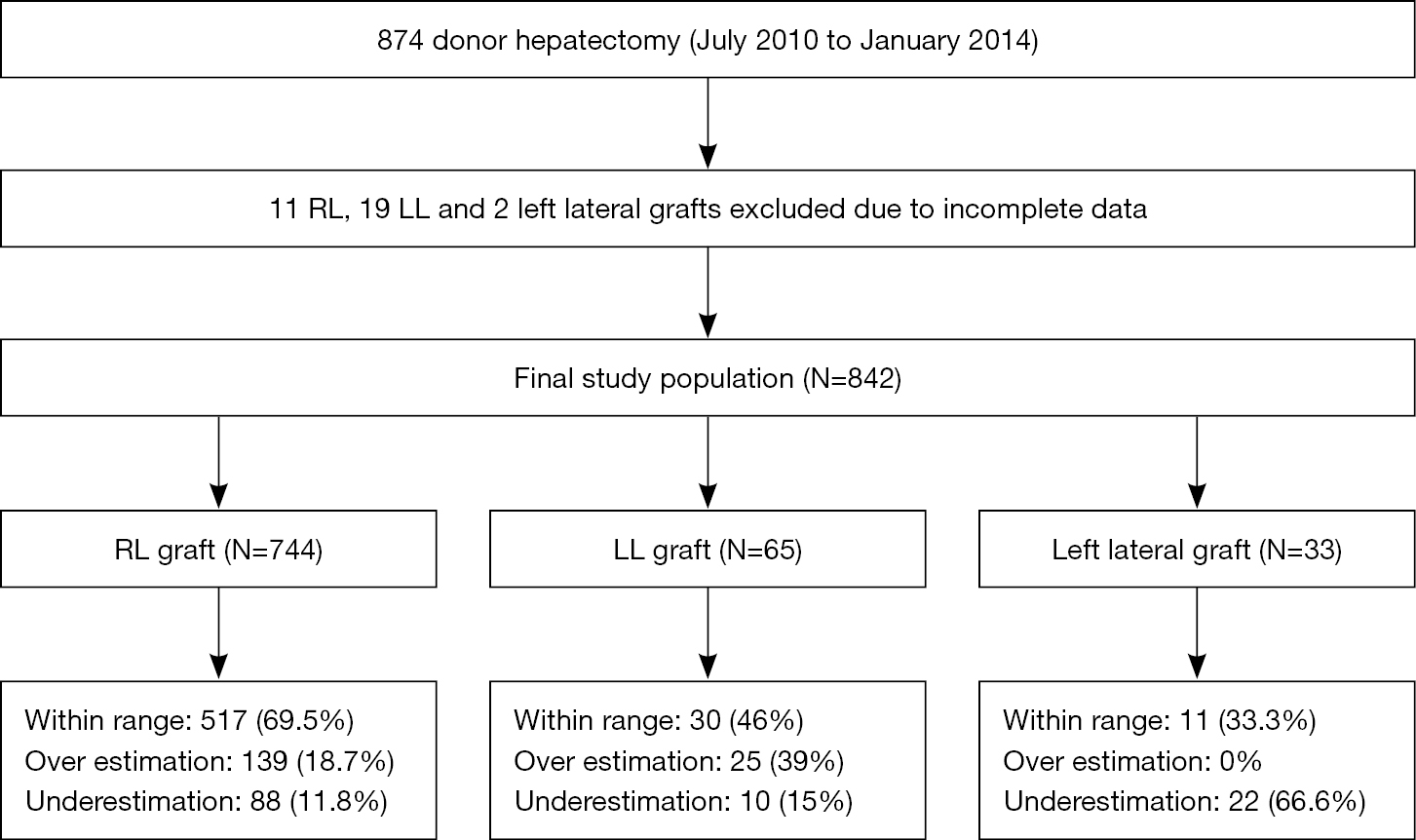 All CT angiography abdomen were performed with a multi-detector CT scanner (SOMATOM Definition Flash, 256, Siemens, Germany), before and after intravenous administration of a iodine contrast medium (15 mL/kg) at a concentration of 350 mg I/mL (OMNIPAQUE 350, GE Healthcare, Shanghai, China) through an antecubital vein of the arm, using an automatic double-syringe injector (Stellant, MedRad, Indianola, PA, United States) at a flow rate of 3–4 mL/second, followed by a bolus of 50 mL of saline at the same flow rate. In all cases, dynamic examination was performed, using a bolus tracking technique. The complete scan was done in single breath hold to avoid breathing artifact. The following parameters were used: thickness 3 mm; increment 11 mm; tube voltage 120 kV; collimation 64×0.625; pitch 0.9 for the pre-contrast, venous and delayed phase scan, 0.5 for the arterial phase scan; rotation time 0.75 seconds.

Transverse images of the portal-venous phase (slice thickness of 5 mm and increment of 5 mm) were used for CT volumetry because hepatic veins were depicted with maximum contrast in this phase (7,8). A semi-automated interactive commercial software called AW Volume share 6 (GE Healthcare; Chicago, Illinois, USA) was used. All major vessels such as the extrahepatic portal vein in the area of the porta hepatis and inferior vena cava, as well as larger fissures, gall bladder and the hepatic ligamentum teres were manually excluded from total liver volume analysis because they have no metabolic function and therefore cannot be added to the volume of the graft .The images were uploaded, and then the outline of the entire liver was determined between liver tissue and surrounding fatty tissue. The liver outline was determined by pencil trace method in cranio-caudal direction. False-positive and false-negative extractions were corrected using manual correction tools.

Thereafter, the volumetric reconstruction of the liver and the quantification of total liver volume were obtained. The radiological plane of transection was drawn along the middle hepatic vein (MHV) to delineate the RL and the LL of the liver (Figure 2). The volume of the caudate lobe was calculated separately. The following volumes are calculated: total liver volume, RL including MHV, RL excluding MHV, LL including MHV, LL excluding MHV. While calculating the GRWR for RL graft, RL excluding MHV is taken as graft weight whereas for LL graft, LL including MHV is takes as graft weight. For left lateral segment graft, the radiological plane of transaction was drawn through the falciform ligament caudally and close to the ostia of left hepatic vein cranially and volume of left lateral segment is calculated.

The choice of graft was mainly based on preoperative recipient sickness, graft to recipient body weight ratio (GRWR), remnant volume in donor and vascular anatomy. Three types of RL graft was used based on the length of MHV retrieved (extended RL graft, with partial or subtotal MHV or Modified RL graft with Segment 5 and 8 veins reconstructed on bench) (9). LL graft was always retrieved with MHV. The actual surgical plane of parenchymal transection varied from radiological plane depending on the type of graft retrieved. In left lateral segment graft, the surgical plane of transection was 1 cm right to the falciform ligament.

After retrieval of the liver graft, AGW was measured on the back table after perfusing the graft with Belzer UW solution® (Durant pharma) at 4 degree C, once the returns were clear.

Descriptive analysis of quantitative data was expressed as means and standard deviation. Categorical data were presented as absolute numbers and percentage. Paired t-test was used to compare the mean of estimated graft weight (EGW) and AGW for each RL, LL and LLS graft. Pearson correlation coefficient was used to study the correlation between EGW and AGW for all three types of liver graft weight.

Bland Altman plot was created by plotting the difference between EGW and AGW against mean of EGW and AGW and the 95% confidence interval (mean ±1.96× SD) was used for assessing the level of agreement between two methods.

Percentage deviation was defined as the difference between the AGW and EGW divided by AGW and multiplied by 100 [(AGW−EGW) ×100/AGW] (negative deviation = overestimation; positive deviation = underestimation). Preoperative EGW was converted to graft weight with conversion ratio of 1 (1 mL = 1 gm weight). A two tailed P value of <0.05 was considered significant. All analysis was done using SPSS 20 version (Chicago, IL, USA). 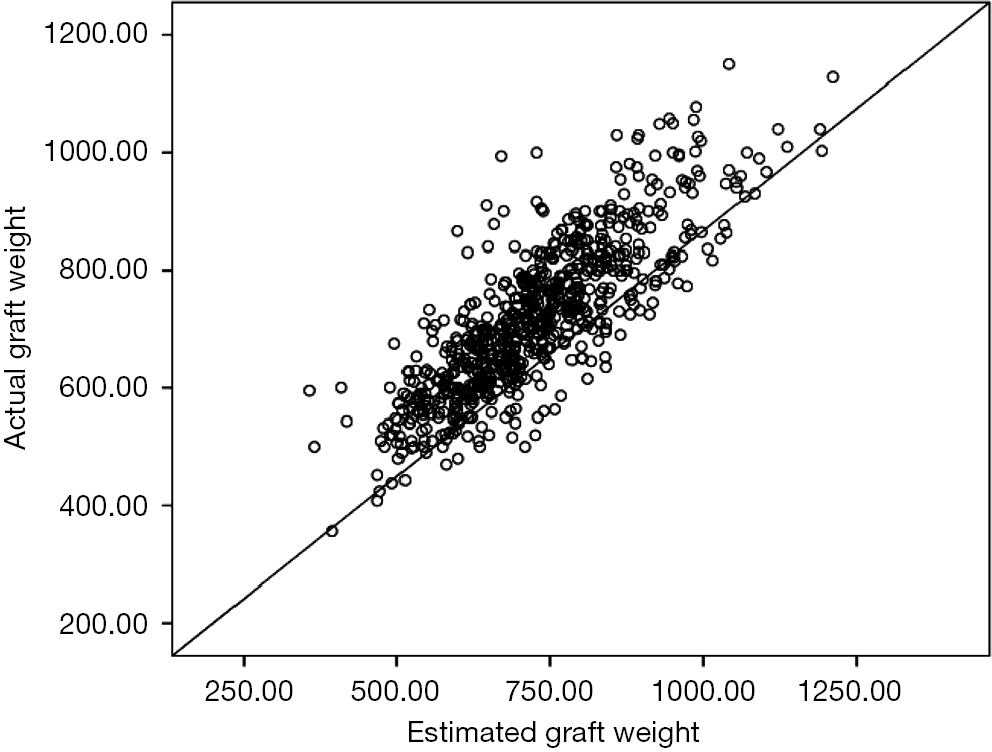 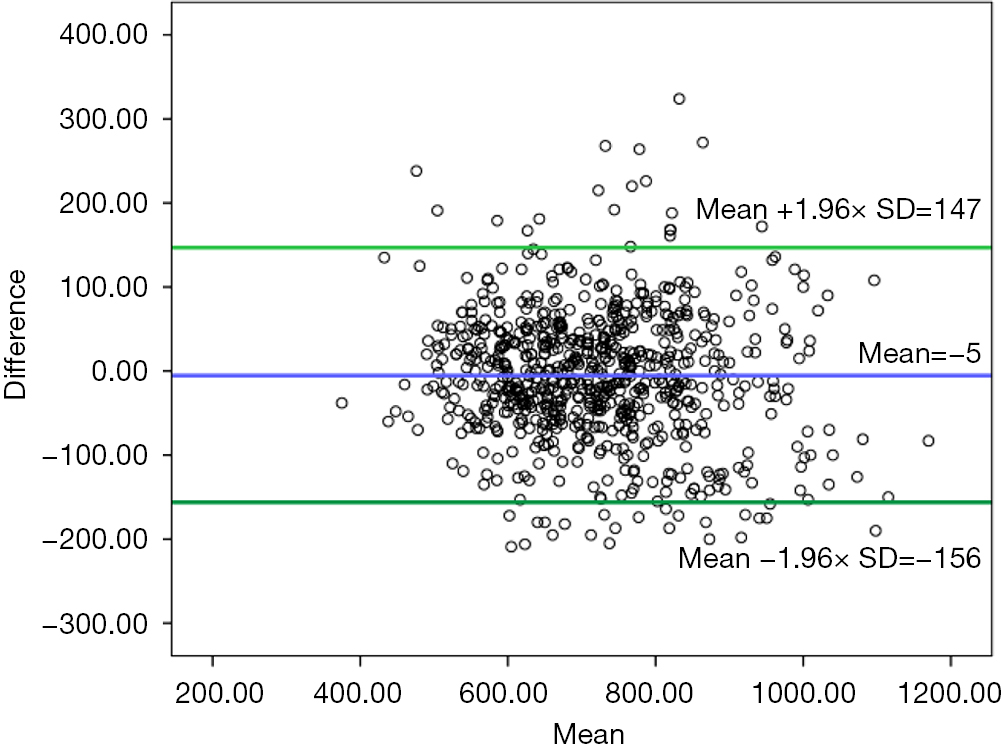 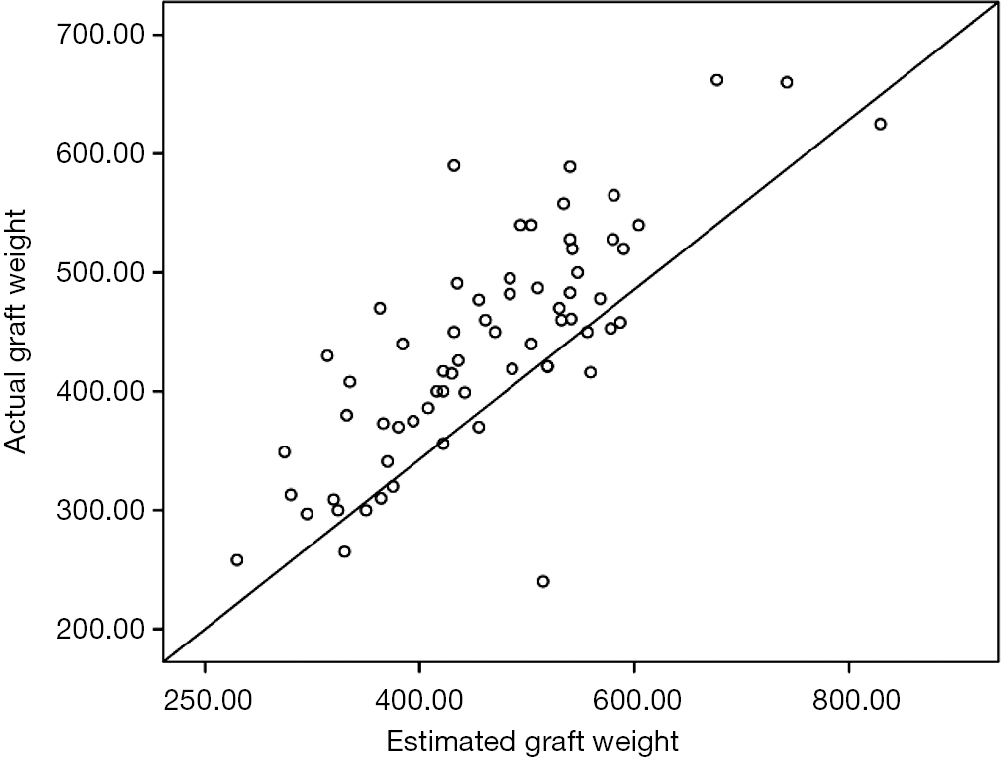 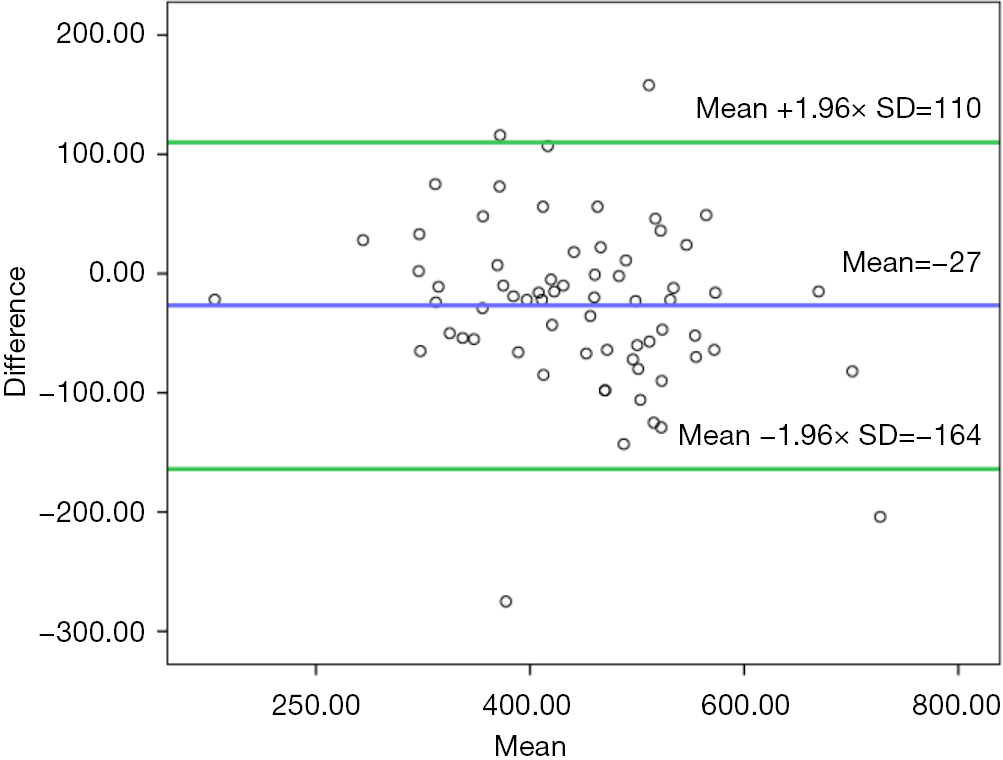 Left lateral segment graft: mean of EGW was significantly low as compared to mean of AGW in LLS graft (203±48 vs. 254±49 gm; P<0.001). The correlation between EGW and AGW for LLS graft was moderate and statistically significant (r =0.49, P=0.003). The scatter plot between AGW and EGW for LLS graft is shown in Figure 7. CT does not overestimate LLS grafts. Twenty-two (66.6%) were underestimated by CT volumetry and 11 (33.3%) of LLS grafts were within range as predicted by CT preoperatively. The Bland Altman graph showed that the 95% limits of agreement range from −137 to +239 (Figure 8). 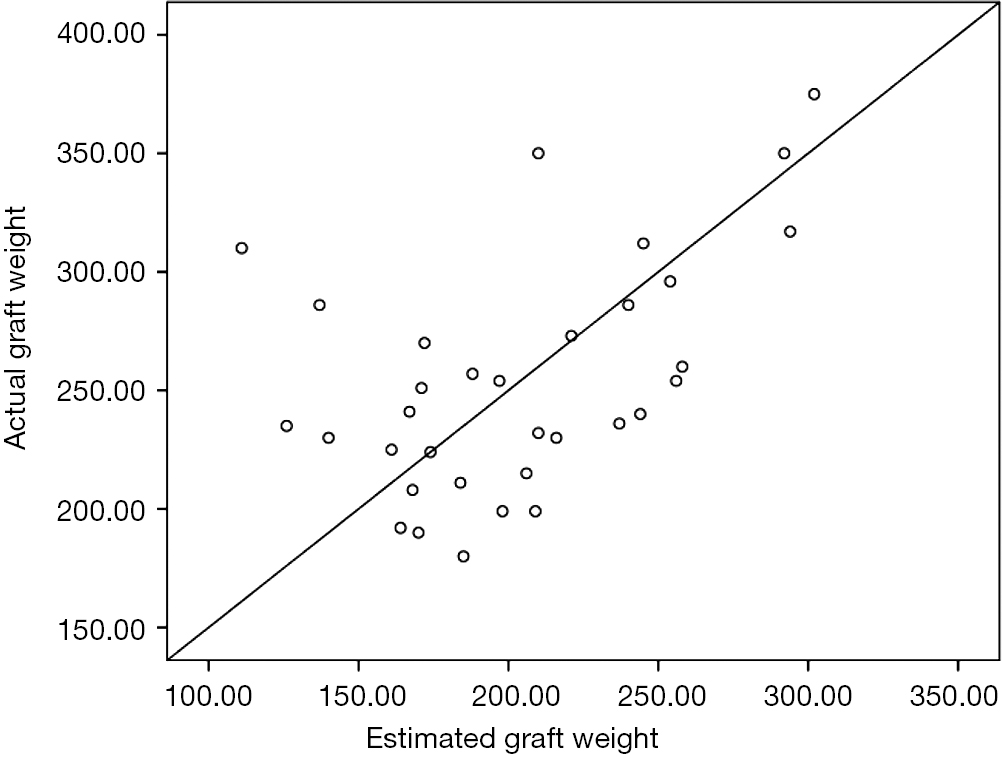 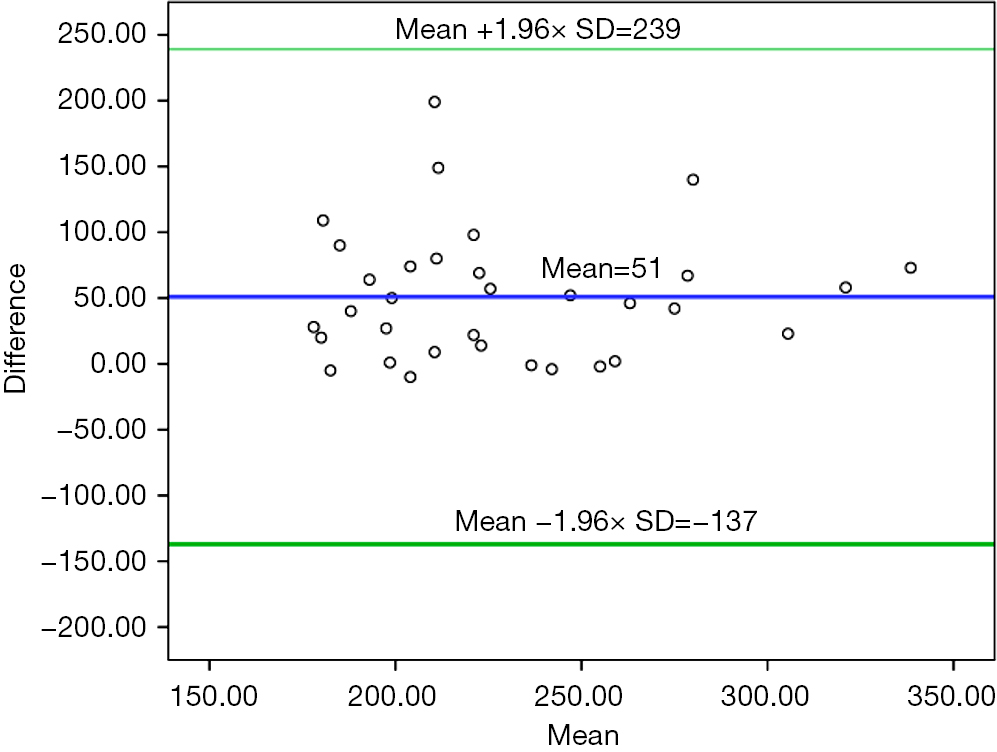 Manual CT volumetry, though labor intensive, is currently the gold standard for volumetric analysis (1,6,10). Automated methods of hepatic volume measurement with CT scans (2,3,11-13) provide acceptable measurement (11,14,15) and reduce dramatically the time required for volumetry assessment. However, these automated volumetric analytical methods tend to overestimate volume as compared to manual methods (2,3,7,11,16). Moreover, all these studies have small number of cases, majority are for RL graft with very few in left and left lateral segments grafts (5,17,18).

Majority of the transplant centers regard 1 cc of liver on pre-operative volumetry to be equal to 1 gram of liver with the assumption that the mean density of healthy liver tissue is 1.00 g/mL (19-21). So preoperatively calculated volumes of both liver lobes have been equated with their respective weights (1,19-21). Hwang et al. measured the amount of blood in human liver grafts and analyzed the correlation between volumetric graft volume and graft weight. They concluded that a conversion factor of 1.22 should be used between the blood-free graft weight and blood-filled graft volume (22,23). However, the utility of a positive fixed conversion factor is doubtful since there may be individual variation, and our results suggest that CT volumetry can both, overestimate and underestimate graft weights. The present study has also taken a conversion factor of 1, between CT estimated graft volumes in cubic cm/milliliters to grams of liver.

There are several factors that account the inaccuracy in EGW. Blood circulating in the intra-hepatic vasculature at the time of imaging studies is associated with graft-volume overestimations when compared to actual blood free grafts measured after retrieval at the back table (7,22,24)). This is due to the fact that the condition of graft on the back table during liver transplant is non- physiological where the liver graft is collapsed after the inner liquids have dissipated through the non-ligated vascular structures (23). Other factors contributing to this discrepancy are: miss-match of actual surgical plane of transection to the radiological plane of liver parenchyma transection plane (1,13,25) and graft dehydration by the University of Wisconsin solution due to its high osmolality (3). Although, EWG is always without MHV in RL graft, the actual RL graft is usually either without MHV (modified RL graft) or with different length of MHV (RL graft with subtotal MHV or partial MHV). This may also account for over or underestimation of RL graft.

Given the fact that optimal GRWR ≥0.8 being necessary for good outcomes in LDLT, overestimation of graft volume by CT volumetry is a difficult situation, especially in cases with borderline GRWR or high MELD score recipients.

The present study has shown that EGW was significantly high as compared to AGW among LL grafts (EGW =460 vs. AGW =433, P=0.003). Based on our findings, we propose to accept donors with estimated GRWR ≥0.80 for RL grafts and ≥1 for LL grafts. Overestimated EGW and accidental low GRWR can pose recipient risk that can be overcome by keeping adequate safety margins of GRWR, especially in LL grafts. In case GRWR falls to below 0.8 due to a volumetric error, inflow modulation in the form of hemi-portocaval shunt or splenic artery ligation is added.

Another important finding of our study is the underestimation of graft volume by CT volumetry. Although underestimation of RL or LL graft has not much clinical significance in adult patients, but in less than 10 kg recipients, this might be a difficult situation as portal flow in these recipients might be inadequate for a large graft. EGW was significantly low as compared to AGW for LLS graft (EGW =203 vs. AGW =254, P<0.001). Ex vivo or in vivo graft size reduction to ensure a GRWR of <3–3.5 can help overcome this problem. This also solves the issue of over-sized grafts for the abdominal cavities of these small children (usually less than 8 kg), which would otherwise require a mesh for staged closure.

Pre-operative CT volumetry significantly overestimate LL graft weight and underestimate LLS graft weight. This should be factored in when selecting LL graft either by taking higher GRWR or inflow modulation to avoid small for size syndrome.

Ethical Statement: All the donors were evaluated under the set protocol and are approved by legal committee which included members from Government, hospital administration, institutional ethical members (Number: 210/2016) and the above study stands approved.