Like colon or stomach, gallbladder can twist, leading to a volvulus; an entity first described by Wendel in 1898 (1). Gallbladder volvulus (GV) is a relatively rare disease occurring when the gallbladder rotates on its own axis, along the cystic duct (Figure 1). Different types of rotation have been described: incomplete vs. complete (≤180° vs. >180°) and clockwise vs. anticlockwise (2). As the rotation might involve the cystic artery, blood supply may be compromised, resulting in ischemia and eventually necrosis. GV constitutes an acute abdominal condition associated with poor outcomes, if not diagnosed and treated in time.

The exact cause of GV remains unknown although several mechanisms have been postulated. Those include anatomical/hereditary, mechanical, physiological and hormonal risk factors (Table S1) (3).

Various theories have been suggested to explain GV. By increasing the gallbladder weight, gallstones would increase the risk of GV (4,5), a questionable theory. Other authors hypothesized that GV may result from peristaltic movements; clockwise rotations being caused by the stomach and anticlockwise rotation by the transverse colon (2). This hypothesis is also debated. Another perspective relies on the physiological changes induced with ageing, including loss of visceral fat and fibrous connective tissue, which would allow a “freely hanging” gallbladder that increases the risk of GV (3). Overall, data suggest that GV is a multifactorial disease whose cases do not necessarily share the same etiology.

This review aimed to provide a comprehensive overview of the available data on GV in terms of epidemiology, clinical presentation, diagnosis, treatment and outcomes.

The present review of the literature identified 178 articles, mostly case reports, including a total of 477 cases of GV. These publications are detailed in https://cdn.amegroups.cn/static/public/hbsn-20-771-1.xlsx and the strategy and selection criteria are detailed in Appendix 1. Characteristics of the patients are summarized in Table 1. 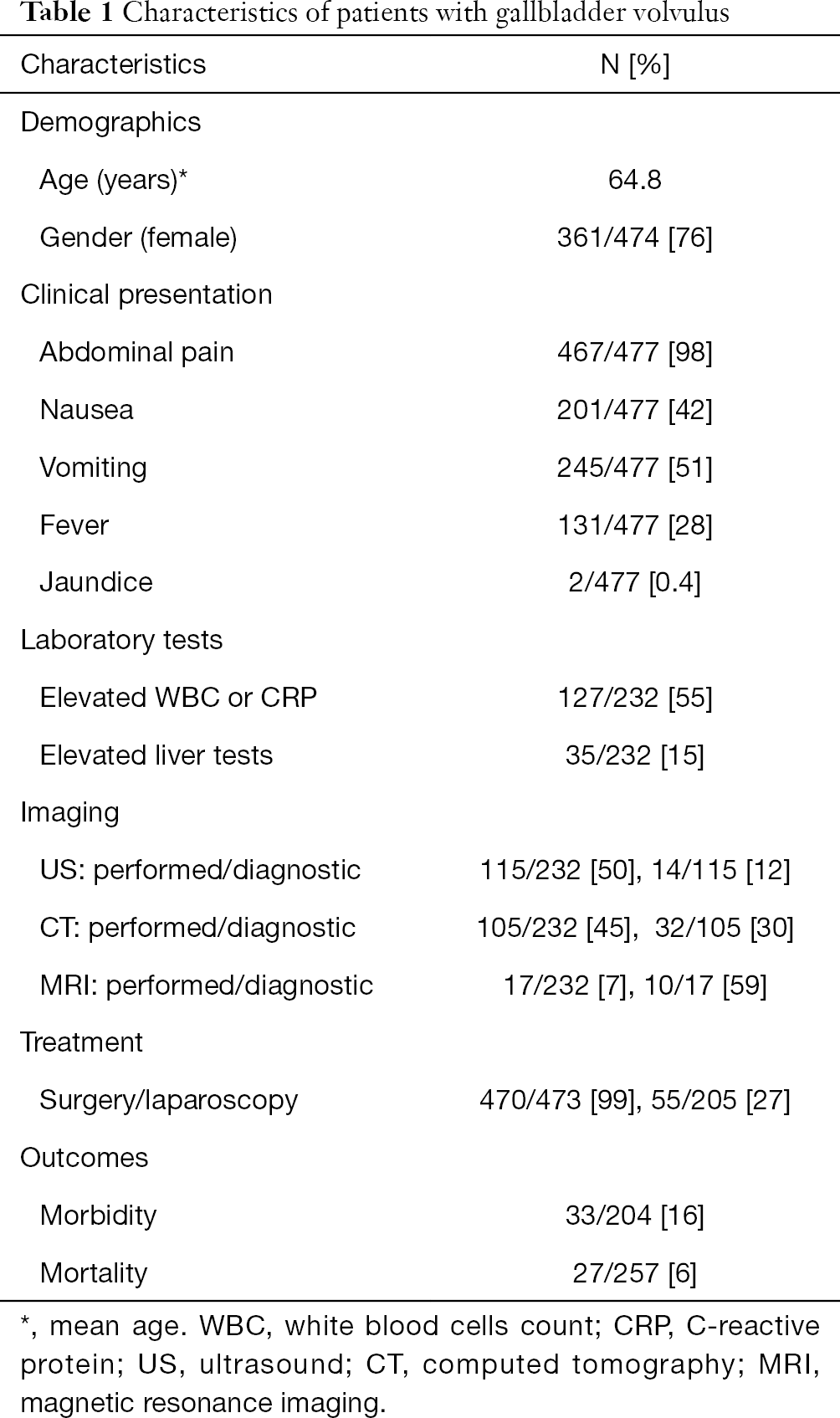 A wide range of incidence rates have been reported. In Japan, GV rates reached up to 8.1% and 11.6% in autopsy and surgical series, respectively (4). Overall, GV represents around 1 case per 350,000 hospital admissions (6-8). Due to a difficult diagnosis, its incidence and significance are likely underestimated. Although a majority of cases were reported in Asia, its geographical distribution remains unclear.

Data on demographics are quite consistent. Although GV can occur at any age, two peaks of incidence have been described: a first minor one in pediatric patients (<18 years) and a second predominant one in elderly patients (>70 years). Mean age was 65 years. Gender appeared to have an opposite impact in these two groups of patients: boys are at increased risk to develop GV than girls in the pediatric subgroup with a 5:1 ratio, whereas GV is more prevalent in women within adult patients, with a 5:1 ratio. Overall, GV was diagnosed in 361 (76.2%) women and 113 (23.8%) men.

While hereditary factors are likely responsible for GV in pediatrics, physiological changes associated with ageing appeared determinant of GV in adults. Therefore, thin women at age of 70 years represent the archetype of patients who develop GV (9).

Both symptoms and signs are non-specific; alone, they do not permit to reliably diagnose GV. Of note, the clinical presentation strikingly mimics acute cholecystitis.

On physical examination, positive Murphy’s sign and a palpable mass in the right upper quadrant might be observed. The latter is more specific but can be difficult to detect. Jaundice is however uncommon (2/477, 0.4%).

Diagnosis was made pre-operatively in only 80 (17%) patients.

The contribution of laboratory tests is poor. Elevated inflammatory markers such as C-reactive protein (CRP) and white blood cells count (WBC) are detected in 127/232 (55%) cases. Conversely, and because the main bile duct is rarely obstructed in GV, liver tests are within normal range in about 85% of patients (197/232).

Unfortunately, there is no available data on the performance of the different types of imaging techniques. Likewise, no study compared their performance.

Standard X-ray of the abdomen is not useful in GV. US allows detecting a gallbladder with an unusual location (outside its anatomical fossa), with thickened wall and eventually gallstones. Doppler-US color has the advantage of assessing the blood flow, determining whether the cystic artery is obstructed or not. CT-scanner and MRI both permit to detect the pathognomonic signs of GV; those include: (I) distended gallbladder, (II) pericholecystic fluid, (III) gallbladder outside its anatomical fossa, (IV) loss of enhancement, and (V) abrupt tapering of the cystic duct (Figure S1) (4,5,10,11). Magnetic resonance cholangiopancreatography (MRCP) is certainly the radiological exam of choice for the diagnosis of GV.

As GV can easily be misdiagnosed as acalculous cholecystitis and typically occurs in frail elderly patients, the risk of misleadingly treat GV patients with antibiotics is increased. Such attempt, even with broad-spectrum antibiotics, is likely to result in no-response to therapy and poor outcomes (4,10,12).

The mechanical nature of GV necessitates to be mechanically treated. Therapeutic options include endoscopy with endoscopic retrograde cholangiopancreatography (ERCP) and surgery. Successful endoscopic treatment of GV is however anecdotic, with only three reports of gallbladder detorsion by ERCP (13). Due to the common minimal fixation of the gallbladder to liver bed in GV cases, percutaneous transhepatic cholecyst drainage should be avoided as it may induce bile leakage and biliary peritonitis. Surgery constitutes the treatment of choice in GV management. In this review, 470/473 (99%) patients underwent surgery with 55/205 (27%) cases reporting laparoscopic approach. These data raise two comments: the high proportion of unavailable data for the surgical approach and the low rate of laparoscopy. The first case of laparoscopic cholecystectomy for GV was reported in 1993, by Desai et al. (13). Meanwhile, 55 and 71 cases treated with laparoscopic and open cholecystectomy were reported, respectively. As expected, these detailed results show an increase in the rate of laparoscopic cholecystectomy for GV overtime.

Like any other indications of cholecystectomy, it can be either performed by laparotomy or laparoscopy. The technique is feasible, safe and can be performed for any types of GV. There is no available data comparing postoperative outcomes of laparotomy vs. laparoscopy. Nonetheless, the evidence on cholecystectomy for other causes than GV can be reasonably extrapolate, which demonstrated benefits associated with laparoscopy: less pain, lower rate of postoperative complications and shorter length of stay (LoS) (14,15). Laparoscopy should also be the first approach for GV, whenever possible.

Undiagnosed GV leads to the progression of the disease, encompassing ischemia, necrosis, perforation and eventually multi-organ failure. Overall, morbidity and mortality were reported in 33/204 (16%) and 27/457 (6%), respectively. Of note, among the 27 cases of death, 6 patients had a CT-scanner but none underwent MRI.

Besides usual prognostic factors such as age and comorbidities, the delay between onset of symptoms and surgery is a prognostic factor. A delay >2 days was associated with an increased mortality (8). Although these data are not recent, the association between an increased preoperative delay and worse outcomes seems reasonable.

The level of evidence on GV is solely based on case reports and case series. Future studies including prospective cohorts or autopsy research would be valuable to reduce the selection bias. With 477 included patients, the present systematic review is the largest one on the topic. In 1999, Nakao et al. reported a large series with 246 cases of GV (4), which only included 3 cases reported in English publications; the other cases were retrieved from a national Japanese database and therefore cannot necessarily be extrapolated to Western countries. Later, Reilly et al. published the only other available systematic review with 324 cases of GV (5). An important limitation of their review is the lack of details and transparency regarding the included cases, with discrepancy between the list of publications presumably selected (n=521) and the total number of GV retrieved cases (n=324), which makes the results hardly interpretable. In addition of providing detailed and trackable data, the present studies integrates a total of 153 new cases which were not included in their analyses.

GV is certainly an underestimated and underdiagnosed disease that can implicate clinicians from various specialties: gastroenterology, surgery, emergency, intensive care and internal medicine.

GV is a relatively rare condition whose diagnosis is difficult. It should be integrated in the differential diagnosis of cholecystitis, particularly in elderly thin women and in patients with no response to antibiotics for suspected cholecystitis. Surgery is the treatment of choice in GV management; it should be performed as early as possible, by laparoscopy, since delayed cholecystectomy is associated with poor outcomes including mortality.

The authors would like to thank Jill Gregory for the design of Figure 1, as well as the Medical Library of the Research and Education Department at Lausanne University Hospital (CHUV), particularly Mrs. Cécile Jaques for her assistance in the review of the literature.

Provenance and Peer Review: This article was a standard submission to the editorial office of Hepatobiliary Surgery and Nutrition. The article has undergone external peer review.

Conflicts of Interest: All authors have completed the ICMJE uniform disclosure form (available at http://dx.doi.org/10.21037/hbsn-20-771). The authors have no conflicts of interest to declare.