The biliary system is well known for its anatomic variability (1). The presence of anatomic variability may influence the plane of transection of the right hepatic duct during donor hepatectomy and great attention has been given to the preoperative and intraoperative imaging of the confluence of the right and left duct (2). Ultimately, the plane of transection chosen by the surgeon must preserve the integrity of the proper and left hepatic duct system and, in the best scenario, provide a single orifice in the graft. Although most of these anatomic variations do not constitute a strict contraindication to donation per se, their presence may influence the choice of the donor, favoring, when possible, a donor with normal anatomy as the presence of multiple ducts may increase the chances of post-operative biliary morbidity in the recipient (3,4). The need for multiple biliary anastamoses in right liver donor transplantation can be as high as 35% (3) When other variables like small for size or high model for end stage liver disease (MELD) score in the recipient may already decrease the chances of good outcome, biliary anatomy may become the deciding factor in donor acceptance (4).

It is well known that the division of the right hepatic duct is one of the most delicate steps of the donor operation and that biliary complications in the form of postoperative anastomotic stricture and leakage are still the predominant technical complications in the recipient (1,4,5). It has also been shown that when having to perform more than 1 biliary anastomosis, the incidence of biliary complications in the recipient increases (6). Preoperative imaging of donor biliary anatomy is of fundamental importance in selecting an appropriate donor, in choosing the plane of transection of the right hepatic duct, and at times, in attempting to predict the yield of the number of biliary ducts in the graft (1,4,5). Techniques used for the preoperative definition of biliary anatomy include magnetic resonance cholangiography (MRCP), helical computed tomograph (CT) cholangiography, endoscopic retrograde cholangiography (ERCP), and percutaneous cholangiography (1,5).

Given that neither CT cholangiography nor MRCP can consistently predict second order biliary tracts accurately, an intraoperative cholangiogram is, in most cases, necessary and to this end several techniques aiming at delivering precise information regarding the plane of hepatic duct transection have been described (7,8). An alternative or additional maneuver to IOC in order to determine a precise 3-dimensional anatomy of the hepatic duct confluence is the probe technique, consisting of inserting a biliary probe through a small choledocotomy (9). These techniques are important in choosing a plane of transection of the right hepatic duct that avoids injury to the donor biliary system and yields a single duct in the graft to be transplanted (9). It has been our experience that, when the probe technique is used, the IOC becomes pleonastic since it does not add any information to the preoperative findings obtained via MRCP and the intraoperative findings identified using the biliary probe.

In this study we set out to test whether the use of 3D MRCP can accurately identify the biliary anatomy of right liver donors prior to surgery. In addition, we set out to determine whether the “roadmap” obtained in this manner assists the surgeon in correctly predicting the number of hepatic duct orifices in the graft prior to surgery and in the intraoperative decision making in regards to the plane of transection of the right hepatic duct. Finally, we wanted to identify whether there were any variables that may increase the accuracy of the 3D MRCP findings interpretation and contribute to the selection of the donor-recipient pair.

A radiologist and the transplant surgeon interpreted the MRCP findings. For the purpose of this study the MRCP findings of the primary reading (MRC1) were compared with findings of a secondary reading (MRC2) performed by a senior radiologist (OA) with specific expertise in the field. The senior radiologist reviewed both the preoperative MRCP and intraoperative IOC without knowing the primary reading. The MRCP findings were classified as normal as described by Choi et al. (10) when a simple confluence between right and left hepatic duct was found and abnormal in the other cases (Figure 1). During the second reading (MRC2), the angle of the right and left hepatic duct confluence was measured in the frontal view. 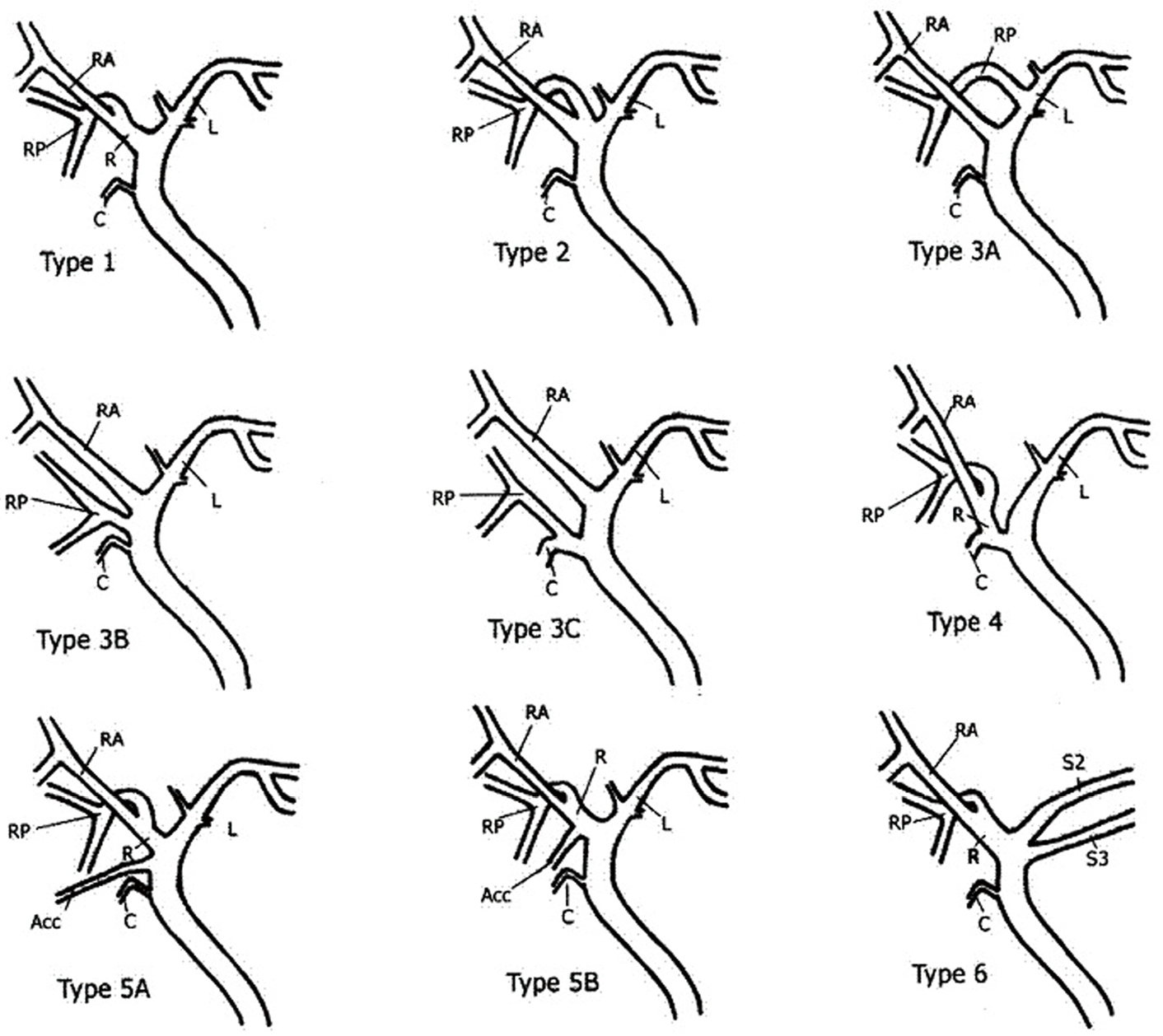 IOC was performed during all donor surgeries. In most cases, IOC was performed through a small (<2 mm), longitudinal choledochotomy in the common hepatic duct of the donor. A 4Fr catheter was used (ARROW percutaneous laparoscopic cholangiography set. CS- 010701) to deliver 5 to 10 mL of contrast (Visipaque. Iodixanol injection solution, manufactured by GE Healthcare) into the biliary tree. The IOC was obtained utilizing postero-anterior views with digital subtraction while holding the donor breath. At the end of the operation the choloedochotomy was closed in a transverse fashion using 6.0 absorbable interrupted sutures.

The number of right hepatic ducts in the explanted graft was assessed on the back table. The sensitivity, specificity, and predictive values of 3D-MRCP for defining biliary anatomy and biliary anomalies in relation to the IOC findings and the final hepatic duct yield observed in the graft were likewise assessed.

Fifteen donors were found to have a Type 1 (normal) biliary anatomy both on MRC1, MRC2 and IOC (Figure 1). Five donors were found to have biliary anomalies. In 2 of these, both MRCP readings corresponded to the findings of the IOC (type 3B; Figure 2). In 1 of the remaining 3 cases while both MRCP readings described a normal anatomy the IOC showed an abnormal anatomy consistent with a 3A type (Figure 3).

Figure 2 Type 3B biliary anatomy diagnosed by MRC (A) in the 2 readings, and confirmed by IOC (B)

In the last 2 cases although the MRCPs were correct in identifying an abnormal anatomy there was a discrepancy between MRC1 and MRC2 readings (these were found to be type 3B and type 2). Table 2 summarizes the overall findings in all donors. Table 3 summarizes the abnormal findings. 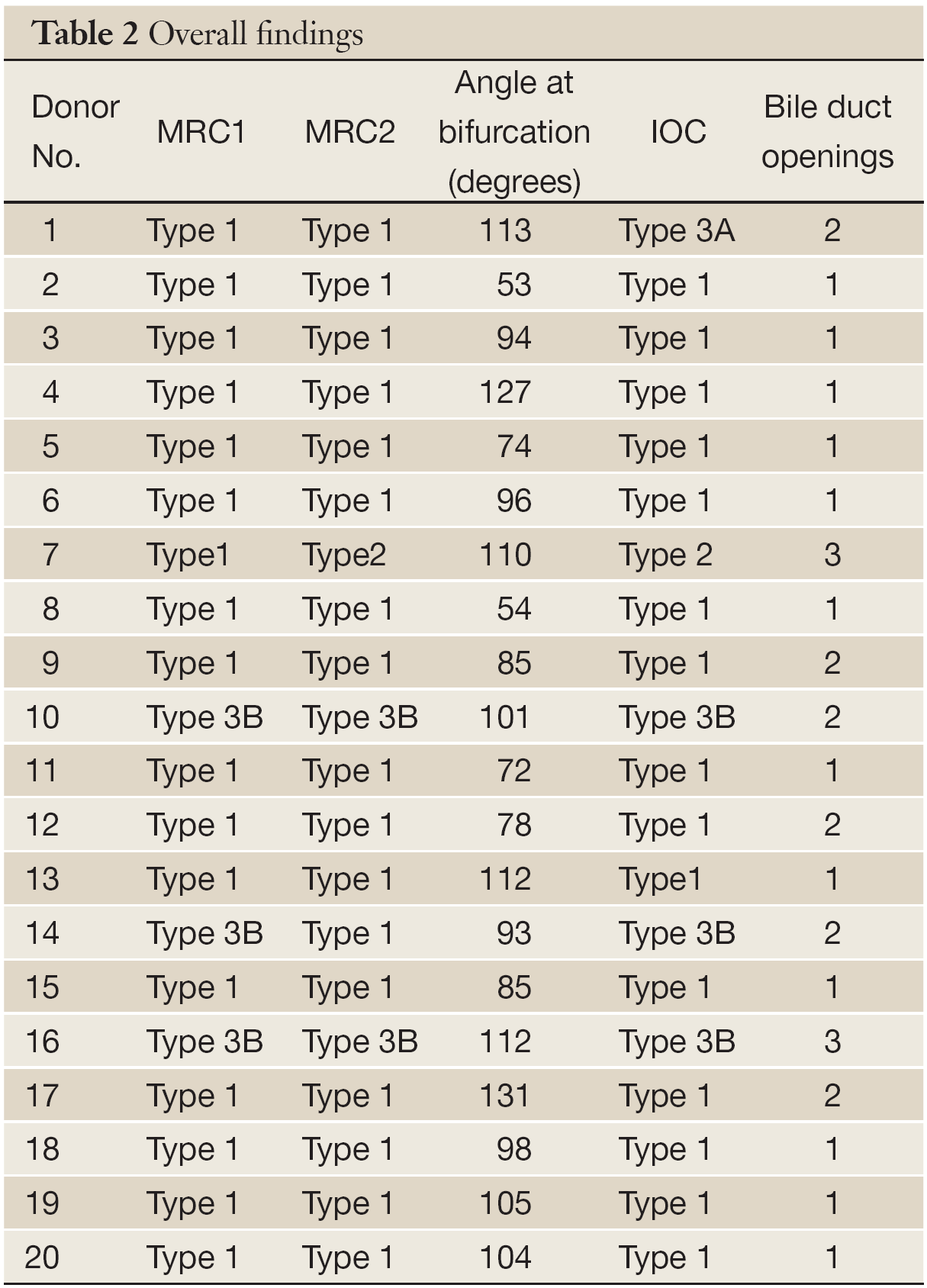 The 5 cases with abnormal anatomy all yielded more than one hepatic duct in the graft. There were 3 cases where Type 1 anatomy was identified by the MRCP and theoretically should have had a yield of a single duct. Instead the yield was 2 hepatic ducts in the graft. In 2 of these 3 cases the angle at the confluence was <90 degrees (78 and 85 degrees respectively; Figure 4). In the third case an obtuse angle was present (131 degrees) but the distance between the main right hepatic duct and the confluence of the posterior and paramedian right hepatic ducts was extremely short (Figure 5). 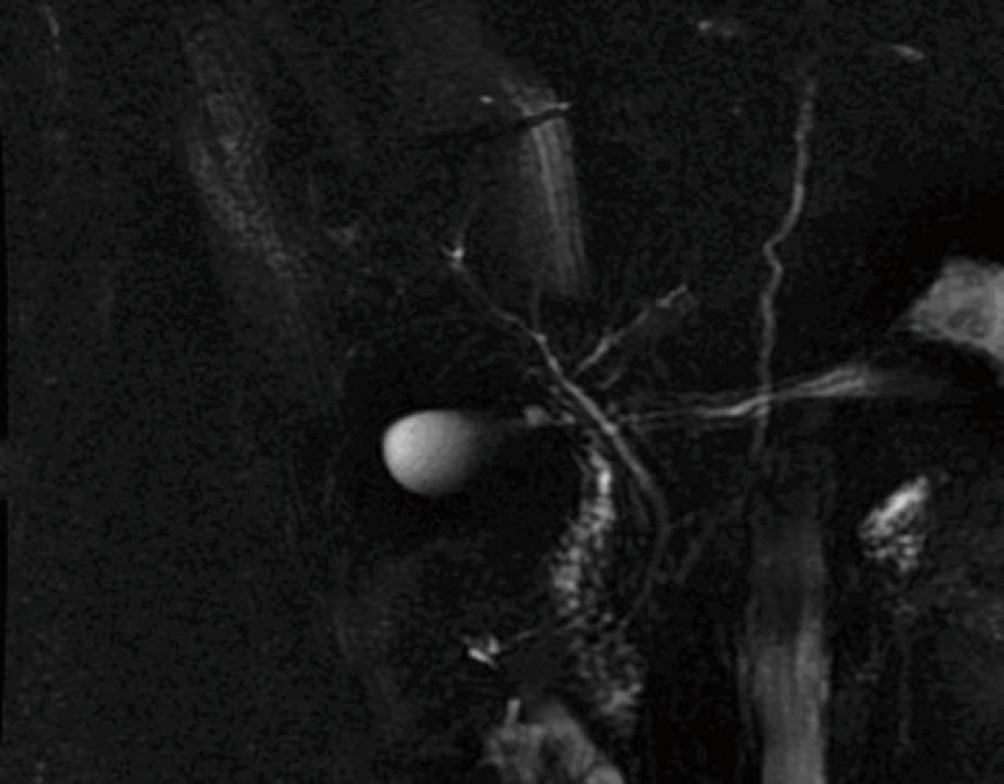 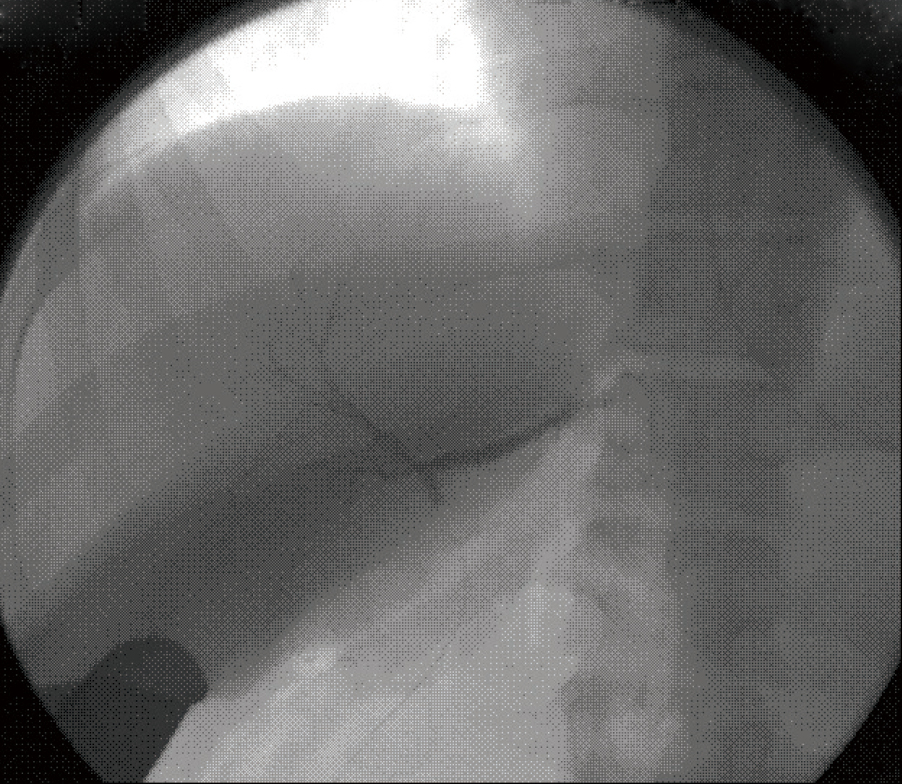 Figure 5 Wide bifurcation angle (131°), but the distance between the bifurcation of CHD and the union between right anterior and posterior hepatic is too short. Two openings were found in the graft

Knowing the anatomy of the hepatic duct confluence preoperatively is very important since it assists the surgeon in the choice of the donor and in theory may also influence the choice of the recipient. In addition, the combination of abnormal biliary anatomy with either a small graft, potentially leading to small for size syndrome, and/or a high recipient MELD may result in a significant increase in postoperative complications and convince the surgeon to change the donor choice if possible. Previous studies have shown that the number of hepatic ducts in the graft and consequently the number of biliary anastamoses impacts the incidence of postoperative biliary complications (1,3,6). Therefore careful delineation of the biliary anatomy pre-operatively is a pivotal step in planning the right liver living donor transplant.

This study confirms the accuracy of 3D MRCP in identifying the biliary anatomy in right-lobe liver donors. Similar results have been already reported in other studies. Specifically Limanond et al. (11) reported close to 100% accuracy when using MRCP as a pre-operative imaging modality. In this study, 19 of 26 patients had Type 1 anatomy that was later confirmed by IOC. Of these, 17 of 19 actually had Type 1 biliary anatomy (sensitivity: 89.5%) at the time of surgery and 5 of 7 had variant anatomy (sensitivity for variants: 71.4%). Overall, MRCP had an accuracy of 84.6% in identifying the correct pre-operative anatomy. It was also reported by Kim et al. (12) that when compared with actual biliary anatomy, MRCP is accurate in 90% of patients. Specifically, MRCP correctly delineated normal anatomy in 15 of 17 patients and aberrant anatomy in 12 of 13 patients. In our study, 3D MRCP was slightly better at determining Type I anatomy (100%). Even though these are small series, the use of MRCP appears to be an excellent predictor of actual anatomy. A recent study argued that preoperative ERCP might actually be safer and superior over standard MRCP for detection of biliary variants (13). However, in addition to being an invasive study that may increase the risk of complications in the donor, ERCP did not obviate the need for intraoperative imaging. Recently, sophisticated software for managing the data obtained from MRCP has been developed (MeVis LiverAnalyzer, formerly “HepaVision 2”, MeVis, Bremen, Germany) (14). This software is able to provide the surgeon with a detailed 3-dimensional map of the hepatic vasculature as well as the biliary anatomy using new rendering algorithms. This improvement in image processing may allow for more accurate preoperative mapping (15,16). However, the experience with this new technology is limited and the selection of the exact plane of hepatic duct transection still requires some form of intra-operative assessment.

The number of hepatic ducts in the graft is an important predictor of post-operative morbidity. With regard to the prediction of the number of hepatic duct orifices present, Lim et al. showed that the combination of two or three imaging techniques (MRCP, 3D MRCP, and/or contrast enhanced 3D MRCP) may significantly improve the accuracy and confidence for predicting the number of hepatic duct orifices compared with 2D MRCP alone (17). However, our study shows that in cases of normal biliary anatomy, there is a high chance of a single hepatic duct yield in the graft, but in 3 of 15 cases in which pre-operative imaging showed normal anatomy (confirmed by IOC) and where the yield should have been a single hepatic duct, in reality more than one duct was obtained in the graft. When these cases where examined, it was found that 2 factors, the angle of the confluence and the distance between the confluence and the secondary ducts played a role in determining the yield of the number of ducts in the graft. In 2 cases, the angle of the confluence between right and left hepatic duct was <90%. Such an acute angle decreases the space where the plane of transection of the right hepatic duct lies. In order to avoid injuring the left hepatic duct the surgeon moves the plane of transection to the right and away from the left duct with the result of cutting closer to the confluence between the posterior and paramedian hepatic ducts. In the third case, the distance between the main right hepatic duct and the confluence with the posterior and paramedian ducts was very short again forcing the surgeon to move to the right. Therefore, the angle of the biliary confluence as well as the length of the duct may be important additional variables in increasing the accuracy and value of 3-D MRCP in predicting biliary anatomy and yield in the graft.

In summary, 3D MRCP is a reliable method for the pre-operative assessment of the biliary anatomy in right liver donors. Nonetheless, further improvements in this technique in addition to the development of newer more accurate software is needed to obtain optimal results and improve the correlation with intraoperative findings. Even in cases of normal anatomy of the hepatic confluence, the yield of a single duct may not be the norm if the angle of the confluence is acute or the main right hepatic duct is very short. In our opinion, intra-operative probing of the hepatic duct confluence through a minimal choledocotomy or through the cystic duct (Figure 6) can provide a detailed and three-dimensional assessment of the anatomy and should continue to be used in conjunction with IOC in the dissection and division of right lobe liver donors. 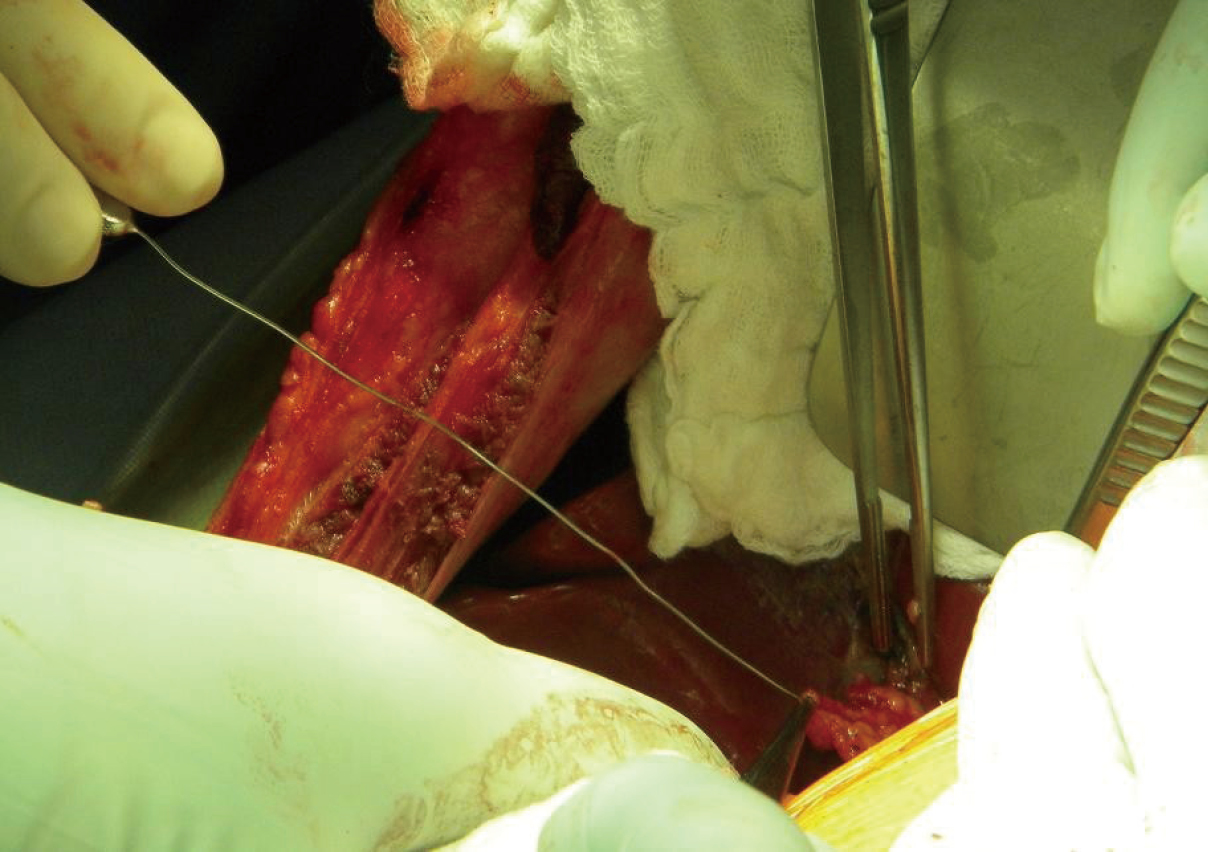