Babylonian clay tablet of the liver

The Babylonians were an ancient people living from approximately 2000 BC to 1600 BC in southern Mesopotamia, a fertile region situated between the Tigris and Euphrates river, an area for the greater part corresponding with modern Iraq. They reached a high level of civilization with their own Akkadian language, writings and traditions. In the realm of their religion, they worshipped a host of gods and goddesses, each with different names and distinct functions.

The ancient Babylonians lived with their deities and consulted them in divination through inspection of a sheep’s liver (1). To this end, priests who were specialized in predicting the future would sacrifice a sheep and closely examine its liver, noting specific anatomical surface features. The visceral side of the liver was divided into 55 boxes with inscriptions, each box with a specific meaning (Figure 1). These prophetic signs were marked on a clay model of the liver using sticks that were put into small holes corresponding with the inscribed boxes. The pattern of the sticks as interpreted by priests serving as oracle, would determine a good or bad omen. Hence, for any important decision, the outcome of divination using a sheep’s liver was awaited. Much of what we know of Babylonian culture and religion has been derived from numerous clay tablets retrieved from the old Mesopotamian grounds. 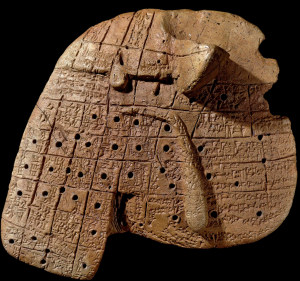 A clay model of a sheep’s liver as depicted in Figure 1, was probably used to instruct those who were trained to become an oracle (2). The same models were used in later times by the Etruscans (1000–30 BC), a highly advanced civilization located in what now is the region of Tuscany in Italy. The liver is shown in a reversed position, the fundus of the gallbladder pointing downward instead of upwards. A right and left lobe is discerned with in the middle part on the visceral side, two protrusions: a more prominent, pyramid-shaped structure referred to as processus pyramidalis and a small lobe, the processus papillaris, corresponding in humans with the caudate lobe and its paracaval extension, respectively. The presence and shape of these structures vary greatly in sheep livers and the oracle would predict the future based on the existence of these variations. Hence, important personal and public matters were determined by ‘reading’ the anatomical surface landmarks of the liver.

The Babylonian clay tablet is on display in the British Museum, London.

Provenance and Peer Review: This article was commissioned by the editorial office, Hepatobiliary Surgery and Nutrition. The article did not undergo external peer review.

Conflicts of Interest: The author has completed the ICMJE uniform disclosure form (available at https://hbsn.amegroups.com/article/view/10.21037/hbsn-22-25/coif). TMvG serves as the unpaid Deputy Editor-in-Chief of Hepatobiliary Surgery and Nutrition. The author has no other conflicts of interest to declare.

Ethical Statement: The author is accountable for all aspects of the work in ensuring that questions related to the accuracy or integrity of any part of the work are appropriately investigated and resolved.