Liver resection remains the gold standard treatment modality for patients suffering from primary or secondary liver tumours. It is the only option that offers the possibility of long-term survival (1). Almost half of resectable cases require an extended hepatectomy to obtain a negative resection margin, a key determinant for long-term survival (2). However, the future liver remnant (FLR) of the liver must make up at least 25% of the total liver volume (3) and thus only 10–20% of patients are suitable for this surgery (4). In order to increase the FLR size prior to surgical resection, a number of techniques have been implemented by clinicians. This has resulted in an increase in candidates for hepatic resection (5) and a reduced risk of postoperative liver failure after major hepatectomy (6).

A 76-year-old male was referred to the senior surgeon (LR Jiao) for management of multiple synchronous colorectal liver metastases following a laparoscopic right hemicolectomy for a final histological staging of a T4N2M1 adenocarcinoma of the colon in August 2014 after 10 cycles of Folfirinox chemotherapy. Prior to chemotherapy, he had bilobar liver metastases, 3 in the left lobe and 4 in the right lobe. He had a good response to the chemotherapy with smaller tumours throughout although seven metastases remained (Figure 1). 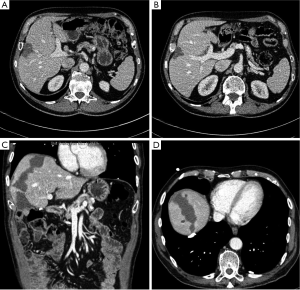 After discussion at the regional liver multi-disciplinary team meeting it was decided that he was suitable for a staged liver resection for resection of his bilobar metastases (8). However, his FLR was calculated as being only 26.0% of the total liver volume. This coupled with a prolonged preoperative chemotherapy was felt to be insufficient to sustain postoperative liver function. He was considered for laparoscopic RALPP procedure to induce liver hypertrophy prior to an extended right hepatectomy. Stage I was completed laparoscopically as outlined below in March 2015. Total operative time was 1 hour and 50 minutes with minimal blood loss and no post-operative transfusion requirements. He returned to the surgical ward for routine post-operative care. He was discharged on post-operative day 1 having had no complications. He underwent updated cross sectional imaging on day 14 post stage I. At this time his FLR was calculated as 38.9% of his total liver volume with a relative increase in volume of 57.9%. He was scheduled for stage II, an extended right hepatectomy laparoscopically, as outlined below. The operative time was 4 hours and 30 minutes with 600 mL of blood loss and two units of intra-operative blood transfusion. Following routine post-surgical care he was discharged home on day 19 after a prolonged post-operative ileus. He had no other 30 day morbidity or mortality. Figure 1 shows CT slices of his liver before and after stage I RALPP laparoscopically. Both procedures were performed by Professor Jiao.

Stage I RALPP was performed using a 5 port (2 mm × 10 mm working ports on each side of abdomen) technique. Following wedge resection of three tumours from segments II (n=2) and III (n=1) respectively (Figure 2A), attention was paid to hilar dissection for identification and ligation of the right portal vein. The portal vein was carefully separated from the common hepatic duct behind the right hepatic artery. The right hepatic artery was isolated and slung with a non-absorbable suture (0/0 prolene) to aid identification and ligation of this at the second stage liver resection. The right portal vein was isolated using blunt dissection and ligated using 2 Hem-o-loks (Teleflex, NC, USA). Following ligation of the right portal vein, the demarcation between the left and right lobe of the liver was clearly visible. Then, radiofrequency ablation using a laparoscopic device (Habib Sealer LH4X, Rita, USA) was performed for completion of RALPP along the demarcation line between segments V and IVa. One of the four tumours in the right lobe of the liver was situated in the junction of segments VIII and IVb along the demarcation line (Figures 1,2). To avoid going through the tumour, the line of virtual division with radiofrequency was veered to the left border of the tumour in segment IVb towards the middle hepatic vein (Figure 2B). 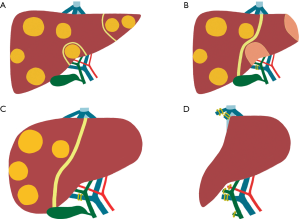 The resected tissue was removed with Endo Catch (Medtronic, Minneapolis, USA) via a small Pfannenstiel incision.

A variant ALPPS technique with both stages being performed successfully entirely laparoscopically is reported here. Laparoscopic surgery has well known benefits for the patient, in particular, quicker recovery, less analgesic requirements, shorter length of stay and reduced morbidity. This laparoscopic technique has been shown to be safe and feasible in patients requiring staged hepatectomy (3).

To increase the number of patients suitable for liver resection, the only proven effective method available for liver regeneration with portal vein embolisation (PVE) has been used to increase the size of the FLR before surgery. However, the rate of hypertrophy is small around 11.9% over a 6-week period (9). Over the last few years, a new surgical technique, ALPPS, has been reported to dramatically increase FLR volume by 74.0% in an average of around nine days (7). In comparison to PVE, ALPPS clearly has been beneficial in terms of both FLR volume (74.0% vs. 11.9%) and time interval to second stage (9 vs. 55 days). However, ALPPS is associated with morbidity rates of 33.0–64.0% (3), which, in comparison, is higher than 16.0% (9) seen after PVE. ALPPS can be accompanied by a high risk of post-operative bile leaks (20.0%) (7), which contributes to high morbidity levels. Efforts were made to reduce bile leakage by an Argentinian group (10) through the implementation of a hermetic bag being wrapped around the diseased liver. This, however, still produced a high morbidity level of 58.0% (11). High rates of bile leakage were also documented by a German study (12) performing ALPPS in nine patients. These complications were largely attributable to the direct result of splitting of liver parenchyma. A new variant ALPPS termed RALPP was thus invented and reported by senior surgeon, Professor Jiao. The major advantage of this technique was to reduce the post-operative complications related to split the liver parenchyma in stage I (bile leak rate of 0%) while capitalising the advantages of rapid liver hypertrophy (66.0%) within a short period of time (21.8 days) as seen with ALPPS.

In 2012, the first totally laparoscopic ALPPS was performed by Machado et al. (13) and colleagues on a 69-year-old woman with multiple bilobar colorectal liver metastases. Stage-one of their procedure involved laparoscopic partial resection of segment 3 followed by right portal vein ligation and in situ split. Full mobilisation of the right liver was performed in the first stage. Liver transection was facilitated though the use of harmonic scalpel and vascular endoscopic stapler. Computerised tomography at the seventh postoperative day showed an 88.0% increase in FLR volume. Stage-two was performed on the ninth postoperative day. Adhesion rate was considerably lower. Division of the remaining liver parenchyma, pedicle, and right hepatic vein was done using a stapling device. The specimen was removed through a previous midline incision. Recovery was uneventful.

In 2014, Cai et al. (14) successfully performed totally laparoscopic ALPPS using a tourniquet technique on a 64-year-old patient with multiple hepatocellular carcinomas. This represented the first case in which the tourniquet technique was performed laparoscopically as a replacement to in situ splitting of the liver. Stage-one included dissection of the right hepatic artery and ligation of the right portal vein. The ligature used was a Flocare® nasogastric tube (Nutricia Flocare, Schiphol Airport, The Netherlands). The tourniquet was wrapped around the liver along the future resection boundary and both ends were passed through the abdominal wall via a small incision and through a thorax tube. The ligature was locked outside the abdominal cavity. Laparoscopic hepatectomy was performed in stage-two by curettage and aspiration. The specimen was extracted through a small incision by a retrieval bag. No bile leakage was observed and patient recovery was uneventful. Cillo et al. (15) subsequently reported similar results with microwave ablation in a patient with colorectal liver metastases.

This is only the third report in the literature of an ALPPS technique being performed entirely laparoscopically. This total laparoscopic approach further benefits patients by reducing adhesions, the severity and number of postoperative complications and surgical trauma for quicker recovery. Laparoscopic RALPP allows the second-stage to be performed at an optimal time for the patient without having an urgency to avoid adhesions. It compares favourably with other laparoscopic ALPPS and variant ALPPS (Table 1). With the advantages of open RALPP over ALPPS, the total laparoscopic RALPP will improve the outcome of major liver resection further by increasing the number of cases for liver resection while keeping a low morbidity and mortality. Currently, a randomised controlled trial comparing the RALPP technique with PVE (REBIRTH trial) is ongoing in our unit to evaluate the real benefit of RALPP over PVE.

We are grateful to BRC support.

Informed Consent: Informed consent was obtained from the patient for publication of this article and any accompanying images.