Portal hypertension caused by liver cirrhosis due to hepatitis is a common clinical condition that can cause bleeding from esophageal and gastric varices in severe cases. In 1969, Rösch et al. first described a successful transjugular intrahepatic portosystemic shunt (TIPS) in animal experiments (1). In 1989, Richter et al. first used this technology in clinical practice (2). Clinical practitioners now commonly use TIPS because it is associated with reduced trauma, it significantly reduces portal blood pressure, and it provides a reliable hemostatic effect (3-5). However, a limitation of TIPS is that it has a high rate of stenosis over the long-term, and it can even lead to shunt occlusion. Some studies reported stenosis rates of 17% to 50% at 6 months and 23% to 87% at 12 months (6,7). In recent years, the use of new covered stents has reduced the rate of shunt stenosis after TIPS, but the 12-month stenosis rate is still reported to be 6.9% (8).

The magnetic compression technique (MCT) is a recently developed method that promotes anastomosis by using magnetic forces to establish anastomotic channels in hollow organs. The MCT is therefore a third mode of anastomosis, after manual suture anastomosis and staple anastomosis. More recent studies have described use of the MCT for gastrointestinal anastomosis (9), vascular anastomosis (10), rectovaginal fistula repair (11), and for preparation of therapeutic fistulas (12). In our previous studies, we successfully established side-to-side anastomosis of the portal vein and inferior vena cava in an interventional operation and an open operation using the MCT (13,14). However, no studies have yet examined the use of this technique to establish an intrahepatic portosystemic shunt. We therefore conducted a preliminary study using beagles as an animal model to assess the possibility of constructing an intrahepatic portosystemic shunt using the MCT (Figure 1). 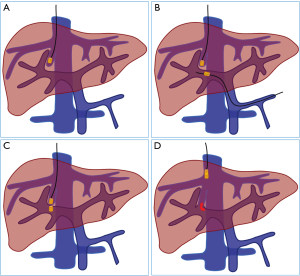 This study was approved by the Committee for the Ethics of Animal Experiments at Xi’an Jiaotong University. Ten beagles (5 males and 5 females) that were 1–6 years old and weighing 12 to 15 kg were obtained from the Experimental Animal Center of Xi’an Jiaotong University (Xi’an, China). Because this was an exploratory study, all animals were included in the experimental investigations, and there was no control group. The magnetic compression device includes two parts: a parent magnet and a daughter magnet. Each magnet is cylindrical, with a diameter of 6 mm and a height of 9 mm, and has a circular hole in the center, with a diameter of 1.5 mm. These magnets were all processed by N45 sintered neodymium iron boron.

The beagles were weighed and then anesthetized using an intravenous injection of pentobarbital sodium (30 mg/kg). With the animal in a supine position, the neck and upper abdomen were shaved and then draped with sterile towels. The right jugular vein (about 20 mm) was dissected and isolated. Then, a median incision (about 15 cm) was made in the upper abdomen; and the splenic vein near the portal vein was about 20 mm long. Five minutes before vascular intervention, a heparin sodium solution (1 mg/kg) was injected through the right great saphenous vein to prevent thrombosis. The right jugular vein and splenic vein were then occluded at the distal end.

Each dog was fed in a single cage after surgery. After recovery from anesthesia, there were no restrictions on food and water intake. During the first 3 days after surgery, intramuscular pethidine (1 mg/kg) was injected every 12 h. Subcutaneous heparin (4,100 U) was given for 3 consecutive days beginning on the day after surgery. On the first postoperative day, oral warfarin (1.25 mg/day) was initiated. At 14 days after the operation, intravenous anesthesia was administered. Then, using X-ray monitoring, the catheter in the right neck was pulled, and the contrast catheter, together with the parent and daughter magnets, were removed through the right jugular vein. An angiography was performed immediately through the catheter in the splenic vein to observe the patency of the shunts of the portal and hepatic veins.

We successfully established magnetic compression intrahepatic portosystemic shunts in all 10 beagles. During the operation, the parent magnet was inserted into the right hepatic vein via the right jugular vein, and the daughter magnet was inserted into the left branch of the portal vein via the splenic vein. The entire surgical procedure went smoothly in all 10 beagles. There was no intraoperative bleeding, no postoperative complications such as thrombosis, and the postoperative survival rate was 100%. The mean operation time was 56.80±10.23 min (range, 40–75 min). Two weeks after the operation (7 beagles) and three weeks after the operation (3 beagles), the parent and daughter magnets were successfully extracted, and splenic venography indicated successful establishment of the portosystemic shunt (Figure 2). In this study, we successfully developed a new mode of anastomosis by establishing a vascular shunt between the portal vein and the hepatic venous system using the MCT in ten beagles. The success rate was 100% and the beagles had no intraoperative or postoperative complications, confirming the feasibility of this technique for establishing an intrahepatic portosystemic shunt. 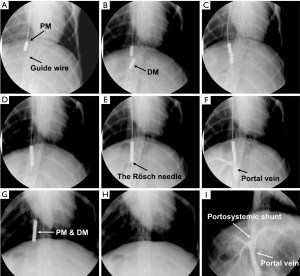 At present, the MCT is mainly used to establish digestive tract anastomoses. In this case, a specially designed magnetic anastomosis ring was used instead of suture anastomosis or staple anastomosis. Our previous magnamosis research on portal hypertension examined the use of different devices to establish a vascular shunt between the portal vein and the inferior vena cava (13), as well as a splenorenal shunt (15), in an effort to reduce portal pressure. During the MCT, the nearby parent and daughter magnets generate an attractive magnetic force. Because of the continuous action of the magnetic force, the portal vein wall and liver parenchyma-hepatic vein wall became ischemic and necrotic, and a new blood flow channel formed.

The spleen of the beagle is not suitable for puncture. We therefore used the daughter magnet for splenic venous incision under laparotomy, and then inserted this magnet into the portal venous system to simulate an interventional operation. Although this is a deficiency in the experimental design, it does not affect the core issue of assessing the MCT for establishment of a portosystemic shunt channel. This preliminary study has several limitations. First, we did not measure portal pressure before and after the MCT surgery, and therefore did not directly confirm the effect of this technique in reducing portal pressure. Second, we performed the MCT in healthy animals, not in animals with portal hypertension.

TIPS have been in clinic for more than 30 years. It has been proved to be a less-invasive and safe technique, and has played an important role in the treatment of portal hypertension. The purpose of this study is to investigate the feasibility of this new technique. Long-term observation and appropriate animal models of cirrhosis are required to determine whether the new technique can reduce the stenosis rate of the shunt. Unfortunately, even with the animal model of cirrhotic dogs, it is difficult to compare the stenosis and obstruction of the shunt established by these two methods through animal experiments, which is the deficiency of this study. The major importance of this study is that it described a new method for establishing vascular bypass using an interventional operation. The shunt established by this new technique has no foreign matter retention and may realize the endothelialization of the shunt, which may improve the long-term patency. However, we cannot yet predict whether use of the MCT to establish an intrahepatic portosystemic shunt in humans will be safe or effective. Nonetheless, the MCT appears to have potential for the treatment of certain diseases in vascular surgery. We hope to stimulate some new ideas by introducing this interesting new method to our peers.

Provenance and Peer Review: This article was a standard submission to the journal. The article did not undergo external peer review.

Conflicts of Interest: All authors have completed the ICMJE uniform disclosure form (available at https://hbsn.amegroups.com/article/view/10.21037/hbsn-22-209/coif). The authors have no conflicts of interest to declare.