Diagnosis and treatment of hepatic angiomyolipoma

Hepatic angiomyolipoma (HAML) is a rare liver tumor that is characterized by its composition with blood vessel, smooth muscle and adipose tissue of varying proportions. Most of the HAML happens in adult females of Asian countries, such as China and Japan. The first case of HAML was reported by Ishak et al. in 1976 (1). Angiomyolipoma occurs more frequent in kidney. Liver ranks the second most frequent site. Misdiagnosis of HAML remains high because lack of variations in composition and radiological imaging findings (2). HAML has been considered as a benign disease; however, it was found recently that blood vessels and smooth muscles of HAML were monoclonal, while its lipid contents were polyclonal, suggesting that it is a true tumor. And some scholar proposed the possibility of malignant transformation (3-5). We performed a retrospective review on all HAML cases in our hospital in the past 8 years with the hope to summarize useful information for future clinical practice.

Seventeen cases of HAML, which were treated in our department from November 2003 to June 2011, were reviewed retrospectively. Analysis was performed on various aspects of clinical manifestations including gender, age, clinical manifestations, imaging characteristics, intraoperative findings, and pathological features. All patients were followed up for recurrence and survival.

Among the 17 patients, 13 were females and 4 were males (female: male = 3.25:1) with ages ranging from 27 to 60 with an average of 36.9 years old. Most of them were asymptomatic except that four patients had occasional right upper abdominal discomfort. Nine patients were diagnosed as HAML during routine physical examination or check-up for other diseases while the other eight were misdiagnosed. No obvious abnormalities were found from physical examination upon admission. Tumor markers AFP, CA19-9, CEA were within normal range in all patients (Table 1). 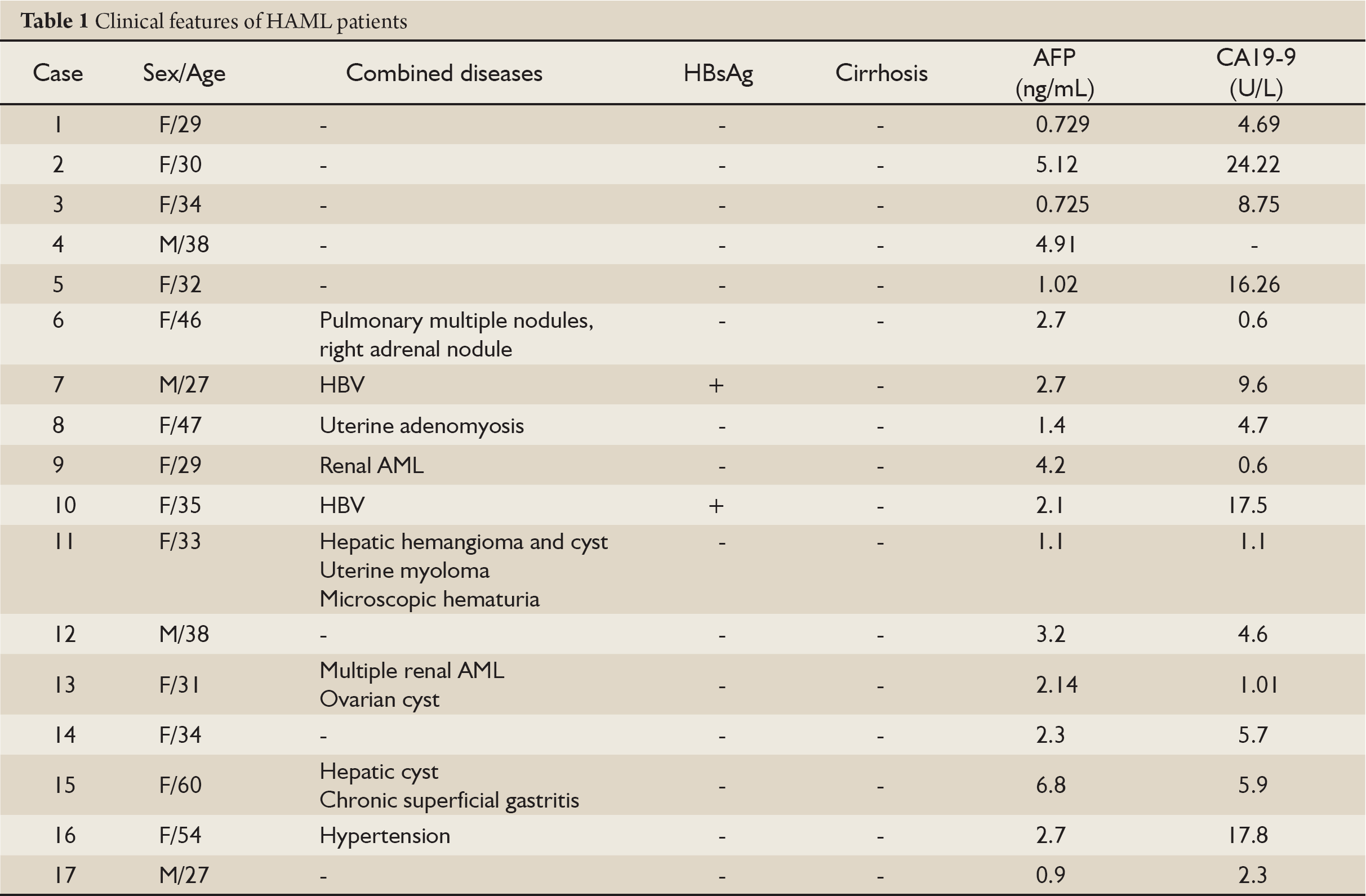 Thirteen patients went subjected to regular ultrasonography (US) examination. Two of them had lesions manifested as hypoechoic while the rest were middle or hyperechoic. The lesions were regular in shape with clear border (Figure 1). Blood flow signals were visible within or at peripheral of the lesions.

Figure 1 A. One hyperechoic nodule of 4.6 cm × 3.9 cm in size was seen in the right hepatic region. The lesion exhibited clear border, uneven echo, and reticular structure; B. Abundant arterial blood flow signal with regular distribution were observed

With computer tomography (CT) examination, all lesions showed clear boundary with surrounding tissue. Adipose tissue is visible inside lesion but different in size and range. In enhanced CT, the arterial phase was strengthened, but the enhancement demonstrated to be heterogeneous in each lesion and inconsistent in different patients. The enhancement has been weakened during the portal venous phase and delayed phase, and still be heterogeneous in nature (Figure 2). 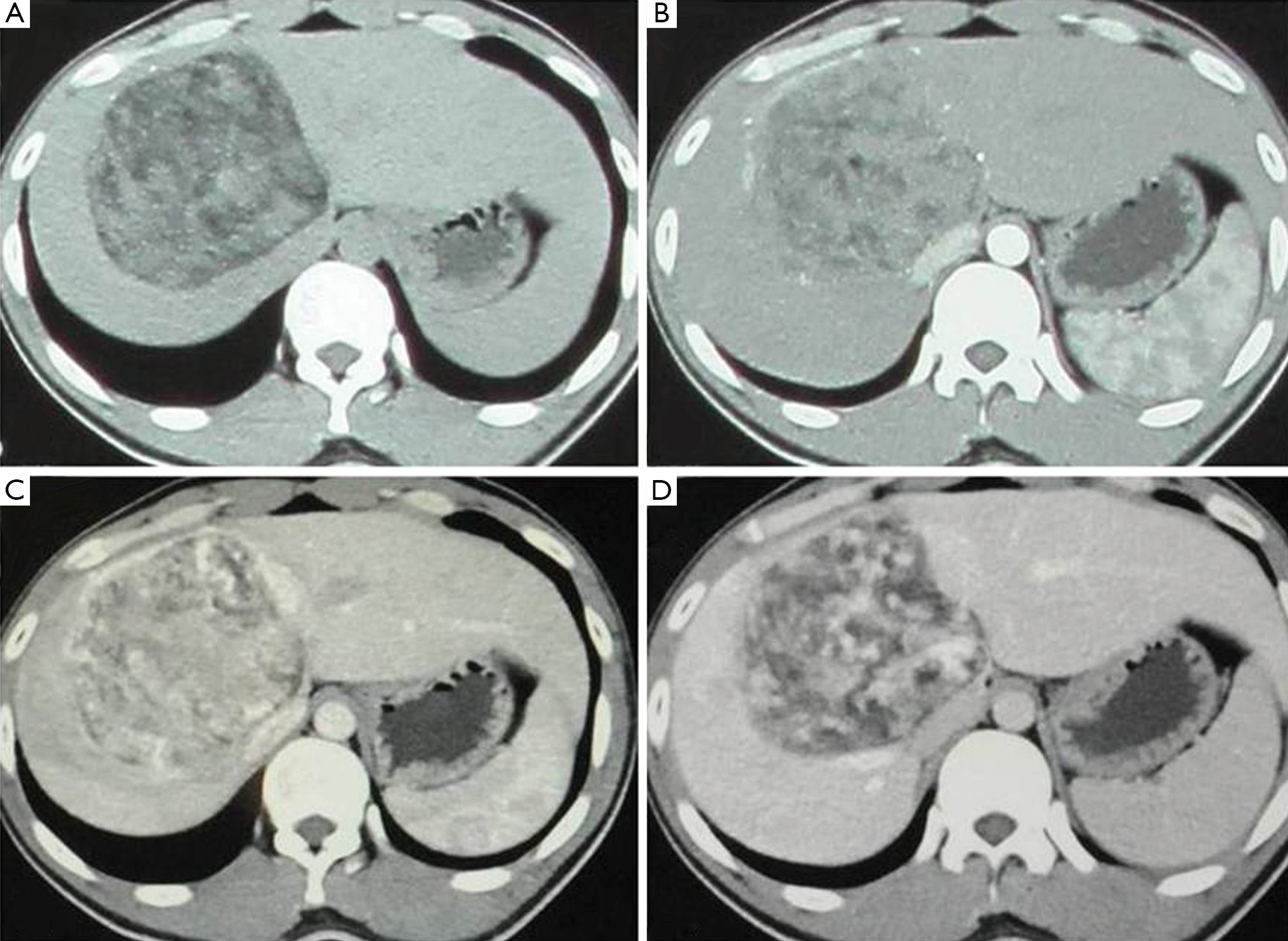 Figure 2 A. A lesion of mixed density was visible in right hepatic region with a size of 10.7 cm × 10.6 cm × 9.9 cm. It has smooth edge, of low density and flocky. CT value -34 to 21HU; B, C, D. Enhanced arterial phase scan shows heterogeneous enhancement with strengthened portal and delayed phases

All 17 patients underwent resection of liver tumor. The patient with both HAML and renal AML was subjected to two-way selective liver and kidney tumor embolization before surgery, which caused rupture of left kidney tumor and subsequent acute abdomen symptom. Emergency surgery was performed to remove both the left kidney and liver tumor. All the other patients had single mass in liver. Seven of them (41.2%) were on left lobe, 9 (52.9%) on right lobe and 1 (5.9%) on caudate lobe. Tumor size ranged from 1.6 cm × 1.0 cm to 17 cm × 10 cm. All patients recovered well after surgery.

Pathologic specimen showed all tumors but three having clean edge with surrounding tissue. The tumor exhibited gray-yellow, gray-red, or gray-brown in color, and soft or crisp in nature. Under the microscope, tumor was composed in different proportions of blood vessels, smooth muscle cells and adipose tissue (Figure 3A). In addition, one case showed large number of foam cells and one had extramedullary hematopoiesis.

All patients were followed and no tumor recurrence or any sign of metastasis has been found so far by US and CT examination.

AML is more frequently found in kidney than in other organs such as liver and lung. While its tissue of origin is still not clear, HAML may be derived from perivascular epithelioid cells (PEC) (6), cells with multiple differentiation potentials that is capable of differentiating into the vascular smooth muscle and epithelial cell and expressing of the melanoma cell marker HMB-45 (7). This view has gradually gained attention among researchers that in the classification of soft tissue tumors in 2002 by the World Health Organization, HAML is classified as perivascular epithelioid cell tumors (PEComas) (8).

The particular tissue composition of HAML makes it hard to distinguish with other liver tumors. Correct preoperative diagnosis of HAML has been reported to be less than 25% (9,10). We were able to obtain a preoperative diagnostic rate of 53% (9/17), which is significantly higher from comprehensive analysis of clinical manifestations. Conventional imaging examinations such as US, CT, and MRL are the major preoperative diagnostic tools for HAML which shows distinctive imaging characteristics due to its content of adipose tissue, blood vessels and smooth muscle cells. However, since the histological compositions of HAML vary greatly among patients, the imaging variations of HAML can be in great deal, which is the main reason for misdiagnosis.

The relative typical appearance of HAML in ultrasonography imaging was regular round or oval mass with clear boundary. When the content of adipose tissue increases within the tumor, it shows a strong echo followed by attenuation. When the smooth muscle composition increases, it becomes hypoechoic with patchy or band of hyperechoic area, with no obvious attenuation. Increase of vascular ingredients within the tumor leads to hyperechoic that is similar to hemangioma (11). HAML appears as low-density lesions with clear boundary on CT scan. Typically, the adipose tissue appears as flaky or punctate distribution in the low-density environment and smooth muscle is shown as multinodular cystic. Dynamic contrast-enhanced scan for HAML shows that there is significant enhancement in the arterial phase, intratumoral blood vessels were visible. There is mild to moderate enhancement in the portal and delayed phases. Capsule degeneration and necrosis can also be found in some HAMLs (12). The characteristics of “fast in fast out” are similar to those of the hepatocellular carcinoma, which is the major reason for the misdiagnosis of HAML for HCC. The presence of adipose tissue is the key to distinguish HAML from HCC. Lipoma-like HAML is often misdiagnosed as lipoma or liposarcoma; while angiomatousis like HAML is often misdiagnosed as a hepatic hemangioma. MRI can be helpful for the differential diagnosis of HAML. Sakamoto (13) found that adipose tissue in HAML showed high signal on T1 weighted images, and the signal would be apparently different from that of adipose degeneration after continuously being strengthened for 6 min.

In addition to the microscopic morphology, immunohistochemistry staining can be used to improve the diagnostic specificity for HAML. HMB-45, a specific antibody against human melanocytic tumor, only reacts with HAML besides hepatoblastoma in liver tissue (15). Together with the expression of A103, SMA, and CD117, these markers play significant roles in the diagnosis of HAML.

As reported previously and same in our observation, HAML occurs mostly in females. However, this discrimination seems has little to do with sex hormone. Yeh et al. (15) concluded that sex hormones did not play a role in HAML development and HAML did not express estrogen or androgen receptors.

The onset of HAML is insidious; most patients have no obvious symptoms or signs, and are mostly discovered during routine physical examination. Some patients may feel discomfort in the upper abdominal region or pain in the liver. Only four patients in 17 reported here experienced intermittent discomfort at right upper abdomen, while the remaining had no obvious symptoms. Epigastric discomfort and other symptoms may be related to the increased tumor mass that leads to elevated tension in liver capsule and increased compression towards the surrounding tissue, etc. Although very rare, there were cases that patients came for treatment due to various complications such as aneurysm rupture, Budd-Chiari syndrome caused by compression of hepatic vein (16,17). One case of capsule rupture occurred in our cases that implicated the importance of early surgery to prevent it from happening.

HAML patients usually lack clear history of hepatitis; however, other types of liver lesions, such as liver hemangioma or liver cyst, were found in our cases (Table 1) and elsewhere (18). Several of our HAML patients also had chronic hepatitis B infection, adenomyosis, uterine fibroids, ovarian cysts, and intermittent microscopic hematuria. It is not yet clear whether or not these diseases are associated with HAML.

In conclusion, it is helpful to perform comprehensive analysis of US, CT, MRI imaging characteristics for correct preoperative diagnosis. Because of it malignant potential as well as the possibility of tumor rupture, surgical resection should be considered as early as possible.

We thank Haitao Zhao, Yiyao Xu, Haifeng Xu, Huayu Yang for helping collecting clinical images and data. We thank Xiangyang Liu for his help in preparation of this manuscript. This work is supported by the National Natural Science Foundation of China (No. 30901453).