Biliary tract carcinoma (BTC) is a group of rare malignant diseases originating from the hepatobiliary tract, which is further categorized into 3 entities based on the originating site: intrahepatic cholangiocarcinoma (iCCA), extrahepatic cholangiocarcinoma (eCCA), and gallbladder cancer (GBC). BTC represents 3% of all gastrointestinal neoplasms in adults (1). However, the incidence of BTC is increasing worldwide, mainly due to iCCA (2). The 3 sub-entities are heterogeneous in genetic and clinical presentation. iCCA is charactered by the fibroblast growth factor receptor-2 (FGFR2) fusion (14–23%) (3-5) and isocitrate dehydrogenase (IDH) mutation (10–20%) (6), whereas GBC by HER-2 amplification (5–15%) (7). Generally, the prognosis of BTC is extremely poor due to its insidious onset, advanced stage at diagnosis, and limited effective treatment options for advanced disease. The overall 5-year survival rate of BTC <5% (8).

Although advances in precision targeted therapy have been applied to advanced BTC, systemic chemotherapy remains the standard care in first-line treatment. In most recent years, novel agents targeting aberrant FGFR and IDH1 genes have shown promising activities against advanced BTC in the second- or later-line treatment and were approved by the Food and Drug Administration (US FDA) for such indication (9,10). However, these agents can be only applied to a small portion of the patients with BTC. Checkpoint inhibitors alone are reported to have the modest activities with an objective response rate (ORR) varied from 5% to 20% and the combination strategy is now under broad investigation with inconsistent results reported from some phase I or II trials (11). Although limited, gemcitabine plus cisplatin (GC), the most widely used chemotherapy regimen for patients with advanced BTC, yields consistent and definite efficacy with an ORR around 26% and an overall survival (OS) of 11.7 months (12). Gemcitabine plus oxaliplatin has shown similar activities with GC in phase II trials and are recommended as alternative regimen by National Comprehensive Cancer Network (NCCN) guideline (13). Although chemotherapy will stand as the major strategy for the first-line treatment for most advanced BTC, there is still a bigger need to develop novel chemotherapy regimens.

S-1 is a fluorouracil derivative that showed good single-drug antitumor activity in pancreatic, biliary, gastric cancer, and other digestive tract tumors. The results of a Japanese phase III randomized trial (FUGA-BT) demonstrated that the combination of gemcitabine plus S-1 (GS) was non-inferior to the standard of care of GC with a median OS of 15.1 and 13.4 months, respectively, and a good tolerability profile (14).

Nab-paclitaxel is a novel taxane with the advantage of less vehicle-related hypersensitivity reactions, neurotoxicity, and neutropenia, with wide antitumor spectrum. The regimen of nab-paclitaxel and gemcitabine has been approved for advanced pancreatic cancer (15). This combination also showed activities in advanced cholangiocarcinoma in a phase 2 clinical trial, in which 74 patients with advanced cholangiocarcinoma were enrolled (16). Although the study failed to meet its primary end point of improvement in progression-free survival (PFS) rate at 6 months (the actual 6-month PFS rate of 61% was insufficient to achieve the expected hypothesis of 70%); however, an ORR of 30%, median OS of 12.4 months, suggesting that nab-paclitaxel may be a new candidate partner for combined chemotherapy.

Nab-paclitaxel and S-1 have synergistic antitumor effect in a preclinical model (17). This combination regimen achieved a favorable ORR in advanced pancreatic cancer and was well tolerated (18,19). Thus, we conducted a phase 2 trial to evaluate the efficacy and safety of nab-paclitaxel with S-1 as the first-line treatment for advanced biliary tract adenocarcinoma. Here, we reported the final results. We present the following article in accordance with the TREND reporting checklist (available at https://hbsn.amegroups.com/article/view/10.21037/hbsn-21-172/rc).

This was a prospective, single-arm, phase 2 clinical trial. The trial was conducted at the Cancer Hospital & Institute, Chinese Academy of Medical Sciences. The trial was approved by the institutional ethics committee. The trial was conducted in accordance with Declaration of Helsinki (as revised in 2013) and the Good Clinical Practice Guidelines. All patients provided written informed consent before enrollment. The registration number in ClinicalTrials.gov was NCT03830606.

Patients received nab-paclitaxel (125 mg/m2) infusion on day 1 and 8. S-1 was administered orally twice daily [80 mg/day for a body surface area (BSA) <1.25 m2, 100 mg/day for a BSA between 1.25 and 1.5 m2, 120 mg/day for a BSA >1.5 m2] on day 1 to 14, repeated every 3 weeks. Patients with partial response (PR) or stable disease (SD) were recommended to receive S-1 as maintenance treatment after a maximum of 6 cycles of the combination therapy. Treatment was permitted until disease progression or development of an unacceptable toxic effect or withdraw from informed consent.

The primary endpoint was ORR. Secondary endpoints included PFS, OS, and safety. Tumor response was evaluated every 2 cycles according to the Response Evaluation Criteria in Solid Tumors 1.1 criteria (RECIST 1.1). Toxicities were measured by the National Cancer Institute-Common Terminology Criteria for Adverse events, version 4.0 (NCI-CTCAE 4.0). PFS was calculated from study entry to disease progression or death whichever occurred first. OS was calculated from study entry to death for any cause.

According to the ABC-02 study, chemotherapy with GC led to an ORR of 26.1%. We hypothesized that chemotherapy with nab-paclitaxel plus S1 would further improve the ORR from 26% to 40%. A sample size was 49 with a one-side type I error of 0.1 and a power of 80%, and with 10% of dropout rate considered, the intended number of patients was 54. All statistical analyses were conducted with SPSS 22.0 software.

Patient disposition is summarized in Figure 1. The median number of cycles was 4 (range, 1–6). A total of 12 patients subsequently received maintenance therapy with S-1 for a median of 5 (range, 2–8) cycles. Two patients with iCCA and 1 patient with GBC had remarkable tumor shrinkage after chemotherapy and underwent hepatobiliary surgery resection. 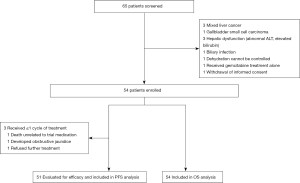 In this study, the combination of nab-paclitaxel and S-1 achieved an ORR of 27.5% in 51 evaluable patients with advanced BTC. The ORR failed to meet the expected endpoint level of 40%. However, the results suggested that nab-paclitaxel and S-1 seemed to have comparable activity to that of the standard gemcitabine-based doublet chemotherapy. The ORR of GC regimen was 26.1% in the early ABC-02 study (12) and 32.4% in the more recent Japanese JCOG1113 study (14). The ORR of GEMOX, another world widely used gemcitabine-based regimen, was 23% in the BINGO study (20). In the JCOG1113 study, GS was shown non-inferior to GC, with an ORR of 29.4%. Even the most recently reported doublet of nab-paclitaxel and gemcitabine only achieved an ORR of 30% by Sahai (16).

Moreover, the combination of nab-paclitaxel and S-1 exhibited an encouraging PFS of 6.0 months and OS of 13.2 months in this study. This is also comparable to that of the gemcitabine-base regimen. In JCOG1113 study, PFS of 5.8 and 6.8 months, OS of 13.4 and 15.1 months were reported with GC and GS, respectively. The OS of nab-paclitaxel plus gemcitabine was 13.0 months (16). However, the OS was only 11.7 months with GC in the early ABC-02 study. All the above data reflect the fact that there is still an unmet need to develop more efficient chemotherapy regimen.

A strategy of triplet chemotherapy has been investigated in some clinical trials. In a phase III trial reported by Sakai (21), gemcitabine-cisplatin, and S-1 (GCS) was proven to have a significant improvement in ORR from 15% to 41.5% and PFS from 5.5 to 7.4 months over GC; however, the prolongation of OS was only marginal significant (13.5 months for GCS vs. 12.6 months for GC, P=0.046). Shroff et al. reported that the triplet combination of gemcitabine, cisplatin, and nab-paclitaxel produced an ORR of 45%, OS of 19.2 months, in a phase 2 clinical trial (22).

Although randomized phase 3 controlled trials are in progress (23), some single-arm studies with small samples have shown that immune checkpoint inhibitors combined with standard chemotherapy may improve the response rate and OS of advanced BTC. Ueno et al. reported a 37% ORR in a chemotherapy-naïve Japanese cohort that received nivolumab plus gemcitabine and cisplatin with a median OS of 15.4 months (24). In another single-arm study, 32 patients with advanced BTC were treated with nivolumab plus GC, and the ORR was as high as 55.6% (25). Nab-paclitaxel and PD-1/PD-L1 inhibitors-based regimen has been explored in a variety of tumors, such as breast cancer and non-small cell lung cancer and showed promising activities and favorable safety (26,27). Due to the favorable safety as discussed below and explicit antitumor activities, it seems interesting to investigate the combination of nab-paclitaxel and S-1 with PD-1/PD-L1 inhibitors in BTC in future.

With respect to adverse reactions, no unexpected AEs were observed in the present study, and the incidence of hematological toxicity was similar to that observed in prior doublet chemotherapy studies (12-14). The incidence of gastrointestinal reactions in the present study seemed a little lower than that of platinum and gemcitabine. For instance, grade 3 or 4 gastrointestinal reactions were observed in 5% of the patients in this study compared with the previously observed 10% with gemcitabine plus cisplatin (12). However, neurotic toxicity of nab-paclitaxel increased with the number of treatment cycles. The incidence of grade 3 neurotic toxicity in the present study was 5.5%, which was similar to the 8% reported by a previous phase 2 study of gemcitabine and nab-paclitaxel (16). With the favorable safety profile, nab-paclitaxel plus S-1 provides a potential new option in case that gemcitabine-cisplatin chemotherapy is not applicable and might act as a favorable candidate partner for checkpoint inhibitors.

The present trial was limited in that it was not a randomized, controlled trial, and included a relatively low number of patients. As a result of these limitations, our findings must be interpreted with caution. We acknowledge that we included a higher percentage of patients with iCCA [64.8%, compared with 22% in early study of ABC-01 (28)]. This latter observation is reflective of the changing trends in biliary cancer epidemiology and was also seen in the recent study of gemcitabine, cisplatin and nab-paclitaxel by Shroff et al. (63% of patients with iCCA) (22). A recent retrospective analysis suggests that different subsets of BTCs may be associated with different survival between iCCA, eCCA and GBC (29). It is suggested that the future research should focus on different parts of BTCs. In addition, randomized controlled trials would be carried out to reduce the bias caused by baseline imbalance.

In conclusion, the combination of nab-paclitaxel with S-1 showed explicit activities in advanced biliary carcinoma that seemed comparable to the current standard regimen in terms of ORR, PFS and OS. The safety profile of nab-paclitaxel and S-1 was favorable. This novel combination thus could be a potential non-platinum and -gemcitabine-based regimen for this disease. The higher ORR observed in gallbladder carcinoma subgroup appears interesting and warranted further investigation. In view of other findings, there is a synergistic effect between nab-paclitaxel and PD-1 inhibitor, and we observed that the combination of the two drugs showed excellent preliminary results in another ongoing second-line study of gastric cancer (NCT04140318), we are considering to conduct a phase II study of AS regimen combined with PD-1 inhibitor in the treatment of GBC.

A part of the study results was accepted as an abstract and poster at the American Society of Clinical Oncology (ASCO) 2019 annual meeting I, Chicago, United States, 31 May to 4 June 2019.

Reporting Checklist: The authors have completed the TREND reporting checklist. Available at https://hbsn.amegroups.com/article/view/10.21037/hbsn-21-172/rc

Conflicts of Interest: All authors have completed the ICMJE uniform disclosure form (available at https://hbsn.amegroups.com/article/view/10.21037/hbsn-21-172/coif). The authors have no conflicts of interest to declare.

Ethical Statement:The authors are accountable for all aspects of the work in ensuring that questions related to the accuracy or integrity of any part of the work are appropriately investigated and resolved. The trial was conducted in accordance with Declaration of Helsinki (as revised in 2013) and the Good Clinical Practice Guidelines. This trial was approved by the institutional ethics committee. All patients provided written informed consent before enrollment. The registration number in ClinicalTrials.gov was NCT03830606.