How to reduce and manage the hepatic arterial complications in living and deceased donor liver transplantation?

Hepatic artery (HA) reconstruction in liver transplantation (LT), particularly in living donor liver transplantation (LDLT) is nerve-wracking job due to the smallest and shortest vascular structures. The diameter of donor HA in Asian people is less than 3 mm in more than three quarters of the donors (1). After introduction of microvascular techniques for HA reconstruction in LDLT, the incidence of arterial complications has decreased significantly (2).

At Asan Medical Center (AMC), transplant surgeons by ourselves have performed HA anastomosis since 2002, and the outcome has improved compared to the previous era, corresponding result to Yan et al. (3). Once transplant surgeons are familiar to microscopic HA anastomosis, most of the hepatic artery thrombosis (HAT) are related to not anastomotic technique but quality of both recipient’s and donor’s HAs.

At AMC in 2019, we performed over 500 liver transplants including more than 400 LDLTs (4). Personally I participated in 182 LTs including 155 LDLTs and 27 deceased donor liver transplantations (DDLTs) from beginning to HA anastomosis (Table 1). Intraoperatively there was 11 problematic cases related to HA (6.0%), and HAT occurred in 1 patient (0.5%) and solved by re-do anastomosis using right gastroepiploic artery. Postoperatively HAT occurred in 5 patients (2.7%) after LDLT, but other HA complications including bleeding from anastomosis, bleeding from non-anastomotic sites, and dissection of arterial wall were absent. Re-do HA reconstructions were successfully performed in all patients, but 1 patient died of irreversible severe graft damage from the initial HAT while waiting for DDLT. 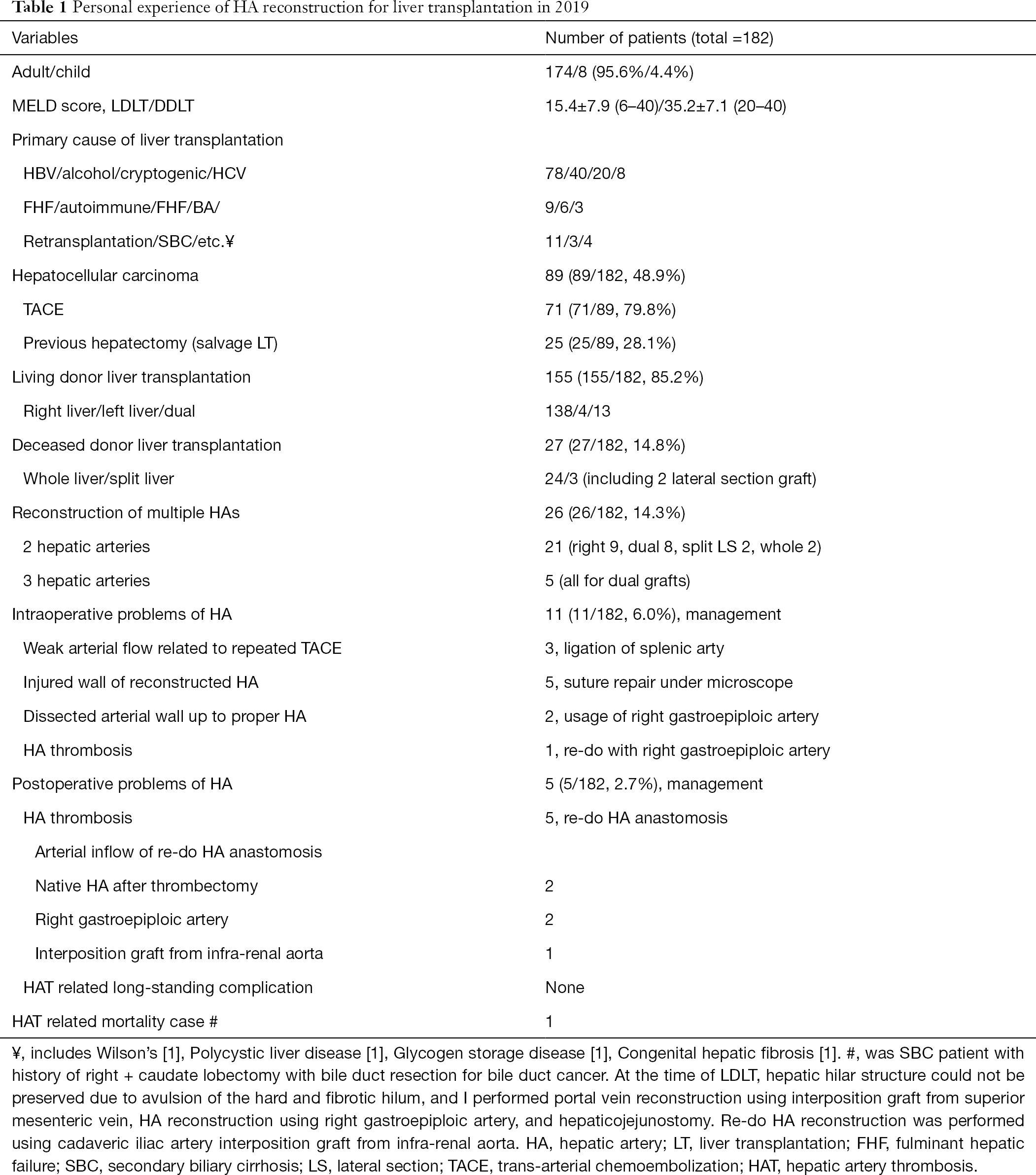 Cautious intraoperative management of both donor’s and recipient’s HAs is primarily important to avoid HA complications. In the donor, preservation of sound donor’s HA without intimal injury is more important than its adequate length because intimal dissection of donor HA is one of the reasons for HAT. Although short stumps of donor’s HA is a big obstacle for HA anastomosis but it can be overcome when accustomed to non-rotating back-wall first technique (5). This fact can be reciprocally applied to the short stumps of recipient’s HA.

When performing nonrotating back-wall first technique for HA anastomosis, recipient’s HA should be larger than donor’s HA to keep wide anastomosis because corner stiches at both sides of arterial wall are not possible for us to make a precise and even stiches, and using a size-matched or smaller recipient’s HA for HA reconstruction are prone to anastomotic stenosis.

HA reconstruction in DDLT is usually performed using surgical loops because the diameter of HA is large enough to perform anastomosis. However, Lin et al. (6) has successfully performed HA reconstruction using microscope in DDLT. Personally I also prefer to microscopic arterial reconstruction in DDLT, particularly when obtaining the sizable recipient’s HA with healthy wall is not easy under severe portal hypertension such as repeated history of upper abdominal operation including re-transplantation, salvage LT, and secondary biliary cirrhosis. Under those unfavorable situations, surgical microscope enabled us to perform sound HA reconstruction with sizable graft HA as long as we obtained recipient’s HA branch with ≥3 mm in diameter and good flow. Based on unpublished AMC data about arterial reconstruction in DDLT, there is less arterial complications in microscope group (4.7%, 6/128) compared to surgical-loop group (7.6%, 26/342) even though the microscope group had worse operative conditions. The possible explanations are as followings. First, microscopic anastomosis in DDLT can be performed with minimal redundancy because arterial anastomosis is usually performed using common or proper HA in the graft. As a result, redundancy related arterial complication can be reduced. Second, not only more accurate intimal approximation but also more meticulous bites of stiches can be performed, and technical problem related HA complication such as leakage or HAT might be minimized. In addition, there is a higher chance for us to detect suspicious injuries of arterial wall in both graft and recipient sides under microscopic magnification, and preemptively exact repair of injury sites might reduce the risk of bleeding from arterial wall.

Rarely but LDLT recipients should undergo HA reconstruction using non-anatomical arterial inflows when there is absence of available recipient’s HA inflow. The 3 main reasons are preoperative destruction of HA from repeated trans-arterial chemoembolization, accidentally intimal dissection propagating into proper HA during hilar dissection under severe portal hypertension, postoperative HAT extension to proper HA. Lin et al. (6) described recipient’s radial artery as an arterial interposition graft was used in 2 LDLT recipients to reconstruct HA under absence of available arterial inflow due to inadequate length of HA. However, most of the non-anatomical arterial anastomosis at AMC were successfully performed using right gastroepiploic artery (7). When right gastroepiploic artery was not available, we successfully used recipient’s great saphenous vein from the ankle or cadaveric fresh superior mesenteric arterial branches as interposition grafts between recipient’s common HA and graft’s HA. In an extreme situation that all the celiac arterial system was destroyed from arterial dissection, we had to perform interposition graft from infra-renal aorta to the living graft’s HA using fresh cadaveric iliac artery, and its small arterial branches was used to overcome size-discrepancy between graft’s HA with small diameter and iliac artery with large diameter.

Provenance and Peer Review: This article was commissioned by the editorial office of Hepatobiliary Surgery and Nutrition. The article did not undergo external peer review.

Conflicts of Interest: All authors have completed the ICMJE uniform disclosure form (available at http://dx.doi.org/10.21037/hbsn-2021-2). The authors have no conflicts of interest to declare.