The earliest stage of nonalcoholic fatty liver disease (NAFLD) is hepatic steatosis, which is defined by hepatic triglyceride concentration exceeding 55 mg/g liver (5.5%) (1). NAFLD can progress to nonalcoholic steatohepatitis (NASH), characterized by the signs of hepatocyte injury and hepatic inflammation with collagen deposition. Approximately 10-29% of patients with NASH will develop cirrhosis within 10 years (2). NAFLD is an independent and a stronger predictor of cardiovascular disease than peripheral or visceral fat mass (3,4). NAFLD prevalence is 15% in non-obese patients, but increases in obese [body mass index (BMI) =30.0-39.9 kg/m2] and extremely obese (BMI ≥40.0 kg/m2) patients to 65% and 85%, respectively (5).

In addition to genetic susceptibility, environmental factors play important roles in the development of NAFLD & NASH (6-8). The rapid rise in NAFLD prevalence supports the role of environmental factors. It was reported that overconsumption of high fructose corn syrup (HFCS) in the soft-drink and pre-packaged foods were linked to the rise in the prevalence of obesity and associated with NAFLD. Ingested carbohydrates are a major stimulus for hepatic de novo lipogenesis (DNL), and more likely to directly contribute to NAFLD than dietary fat intake.

Normally, insulin binds α-subunits of its receptor on adipocytes and hepatocytes leading to autophosphorylation of β-subunits and activates tyrosine kinase (10). The autophosphorylated receptor activates insulin receptor substrate (IRS)-1, IRS-2, Src homology collagen (Shc), and APS [adaptor protein with a pleckstrin homology (PH) and Src homology 2 (SH2) domain] which activate downstream components of the insulin signaling pathways. In both skeletal muscle and adipose tissue, these insulin-mediated signaling cascades induce the translocation of glucose transporters (GLUT). IRS-1 was linked to glucose homeostasis while IRS-2 was linked to the lipogenesis with the regulation of lipogenic enzymes sterol regulatory element-binding protein-1c (SREBP-1c) and fatty acid synthase.

In obese, increased production of TNF-α and plasma free fatty acids are major stimuli of Ser 307 phosphorylation of IRS-1 (11). Inhibition of IRS-1 due to the phosphorylation of its Ser 307 residues also requires the activation of both c-Jun N-terminal kinase (JNK) and inhibitor κB kinase β (IKK-β). Both TNF-α and free fatty acids induce JNK and IKK-β activation. TNF-α stimulates phosphorylation of Ser residues of both IRS-1 and IRS-2 in hepatocytes and Ser residues of IRS-1 in muscles. JNK is one of the stress related kinases and plays an important role in the development of insulin resistance. Activated JNK induces Ser 307 phosphorylation of IRS-1, disturbs insulin downstream signaling, and subsequently causes insulin resistance. Protein kinase C theta (PKCθ) and IKK-β are two pro-inflammatory kinases involved in insulin downstream signaling that are activated by lipid metabolites. IKK-β phosphorylates the inhibitor of nuclear factor kappa B (NF-κB). NF-κB has both apoptotic and anti-apoptotic effects.

The hepatocyte mitochondria are the main site of β-oxidation of free fatty acids (12-15). The electrons removed from free fatty acids during β-oxidation, eventually leading to ATP synthesis. Depletion of the energy (ATP) stores increases the susceptibility of hepatocytes to various injuries.

Fructose is a monosaccharide (16,17). It is a sweet tasting sugar and found naturally in fruits and some vegetables. Fructose is sweeter than either glucose or sucrose. Before the development of the worldwide sugar industry, fructose was limited in the human diet. Honey, dates, raisins, molasses, and figs have a content of >10% of this sugar. A fructose content of 5-10% by weight is found in grapes, raw apples, apple juice, persimmons, and blueberries.

Today, the principal sources of fructose in the American diet are HFCS (18-20). Industrially, HFCS are frequently found in soft drinks and pre-packaged foods. The most common form of HFCS is HFCS 55, which has 55% fructose compared to sucrose which is 50% fructose. Foods and drinks are made with HFCS 55. A study showed that certain popular sodas and other beverages contain a fructose content approaching 65% of sugars. Moreover, HFCS can be made to have any proportion of fructose, as high as 90%. It was recently reported that more than 50% of preschool children consume some calorie-sweetened beverages. 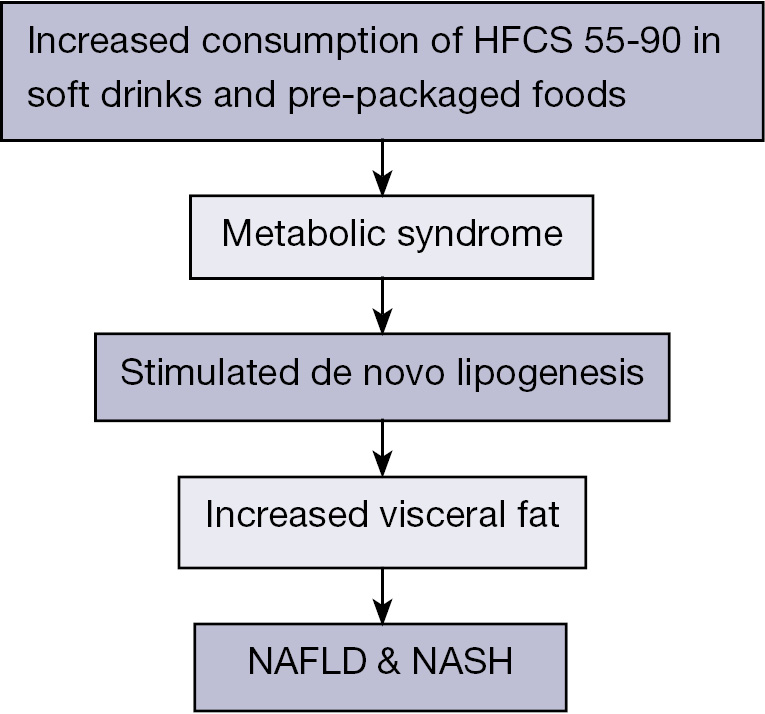 Fructose is an intermediary in the metabolism of glucose (17-20). But, it differs in several ways from glucose. Fructose is poorly absorbed from the gastrointestinal tract by a different mechanism than that for glucose (Figure 2). Most cells have only low amounts of the glucose transporter type-5 (GLUT-5) transporter, which transports fructose into cells. Glucose is transported into cells by GLUT-4, an insulin-dependent transport system. Fructose is almost entirely cleared by the liver. Hepatic metabolism of fructose stimulates lipogenesis. These events are independent of insulin exertion and phosphofructokinase regulation step. High fructose intake is associated with increased plasma TGs by an up-regulation of hepatic DNL and TGs secretion, and a decreased clearance of very low density lipoprotein triglyceride (VLDL-TG). Fructose phosphorylation in the liver consumes ATP, consequently the accumulated ADP serves as substrate for uric acid formation. These events facilitate hepatic oxidative damage and lipid peroxidation. 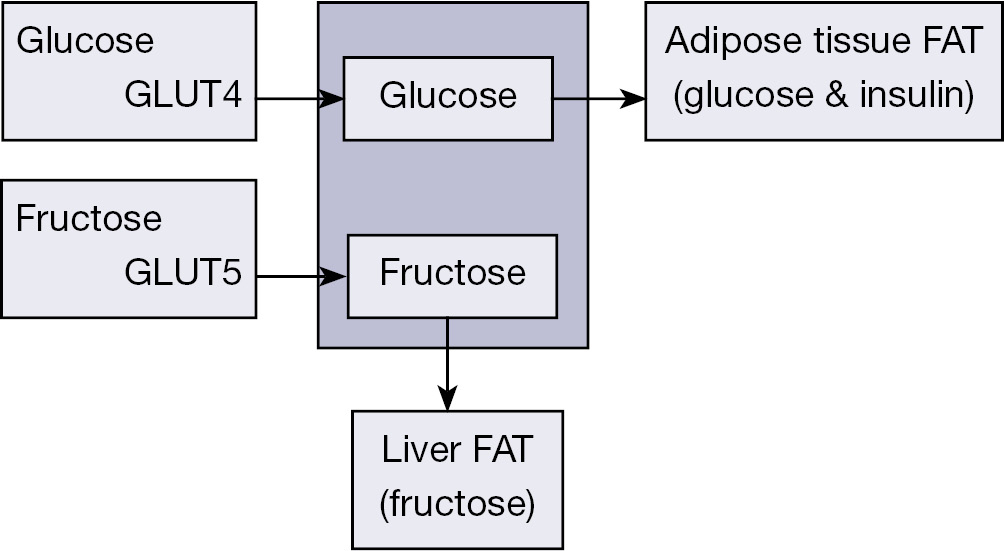 Figure 2 Fructose is poorly absorbed from the gastrointestinal tract by the glucose transporter type-5 (GLUT-5) transporter. Glucose is transported into cells by GLUT-4, an insulin-dependent transport system. Fructose is almost entirely cleared by the liver (the circulating concentration is ~0.01 mmol/L in peripheral blood, compared with 5.5 mmol/L for glucose). Hepatic metabolism of fructose induces de novo lipogenesis. Fructose phosphorylation in the liver consumes ATP, consequently the accumulated ADP serves as substrate for uric acid formation.

Aeberli et al. conducted a 4-week randomized cross-over study with a 4-week wash-out between each diet in nine healthy young men comparing four different soft drinks with levels of fructose, glucose, and sucrose that are closer to normal intake (23). This is a randomized crossover comparison of four beverages with two levels of fructose, glucose, and sucrose (50% fructose). The investigators examined insulin sensitivity of the liver and the whole body by the hyperinsulinemic-euglycemic clamp technique. They showed that compared with the high-glucose beverage, the low-fructose beverage impaired hepatic insulin sensitivity, but not whole-body insulin sensitivity. In addition, they found that total and low density lipoprotein (LDL) cholesterol levels were increased by fructose relative to glucose. Free fatty acids were also increased in the fructose beverage groups. This study adds to the information about the role of fructose either from sucrose (ordinary table sugar) or from high-fructose corn syrup in initiating liver dysfunction and the metabolic syndrome.

Cohen and Schall also reported that sucrose increased TG following a meal but glucose had no effects on lipids (24).

Fructose as a main source of hepatic DNL in NAFLD

Increased DNL (increased hepatocellular carbohydrate is converted to fat) is a significant contributor to increased hepatic triglyceride content in NAFLD (25,26). Recent techniques such as isotope methodologies, multiple-stable-isotope approach and gas chromatography/mass spectrometry showed that relative contribution of three fatty acid sources to the accumulated fat in NAFLD as adipose tissue, DNL and dietary carbohydrates. Twenty-six percentage of the liver fat arises from DNL and 15% from the diet in patients with NAFLD.

Fructose can induce NAFLD by its ability to act as an upregulated substrate for DNL and by bypassing the major rate-limiting step of glycolysis at phosphofructokinase. Continuous fructose ingestion may cause a metabolic burden on the liver through the induction of fructokinase and fatty acid synthase (27).

Evidence support fructose as a weapon of mass destruction in NAFLD 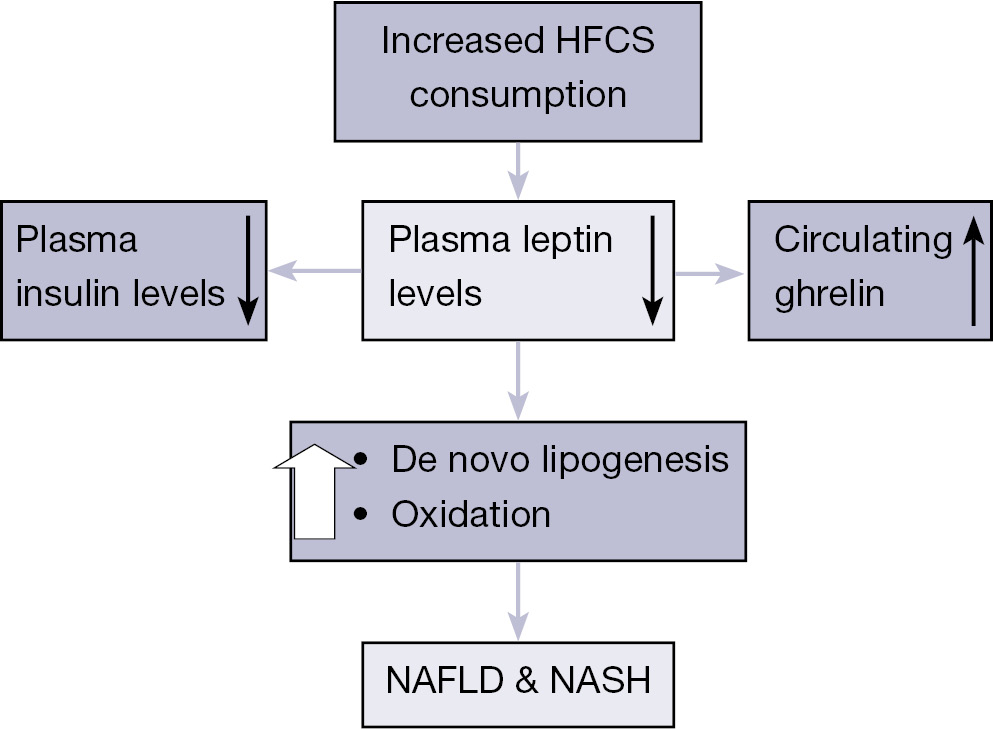 Lipocalin-2 (LCN-2) is a 25-kDa secretory glycoprotein initially identified in human neutrophils and it is abundantly present in the circulation (36). It was demonstrated that the liver is the main source of serum LCN-2 which plays a key role in the acute-phase response, regulation of immune responses, and apoptosis. A recently published study investigated LCN-2 expression and its role in rat models fed by high fructose (1). In this study, fatty liver was triggered in male Sprague-Dawley rats fed either with liquid Lieber-DeCarli (LDC) or LDC +70% cal fructose (L-HFr) diet for 4 or 8 weeks. Both LDC-fed and L-HFr-fed rat showed fatty liver, histologically. In the liver, the transcription of inducible nitric oxide synthase (iNOS), and TNF-α was significantly up-regulated at week 4. Hepatic LCN-2 expression was 90-fold at week 4 and 507-fold at week 8 higher in L-HFr-subjected ratsvs.control (P<0.001). Additionally, fasting leptin and TG were elevated in the L-HFr regimen. Moreover, protein expression of hepatic LCN-2, CD14, phospho-MAPK, caspase-9, cytochrome-c and 4-hydroxynonenal were increased in the L-HFr group. The localization of LCN-2 was predominantly restricted to MPO+ granulocytes in the liver. This study showed that fructose diet up-regulates hepatic LCN-2 expression, which correlates with the increased indicators of oxidative stress and mitochondrial dysfunction. The level of fasting blood uric acid was significantly elevated in L-HFr-treated rats. Hepatic GLUT-5 (fructose transporter) gene expression was also significantly elevated in L-HFr fed rats, which was correlated with the accumulated fat in the liver.

Ryan et al. reported a post hoc analysis of 52 obese, insulin resistant adults in a weight loss program (43). These patients were randomized to receive either a low carbohydrate diet (40% carbonhydrate/40% fat) or a low fat diet (60% carbohydrate/25% fat) for 16 weeks. Both groups lost a significant amount of weight over the trial period. Serum ALT levels decreased twice in the low carbohydrate diet compared to the low fat diet. Insulin resistance levels were also shown to decrease in both groups with no significant differences between them. The authors concluded that low carbohydrate diets are more beneficial than low fat diets at reducing ALT levels. de Luis et al. reported that a 3-month intervention of hypocaloric diet (either low fat or low carbohydrate) in obese patients improved biochemical parameters, BMI and circumference (44).

In another study by Haufe et al. demonstrated in a total of 102 patients including both male and female, over a 6-month period diet therapy with low carbohydrate (90 g of carbohydrate and 0.8 g protein per kg weight, 30% fat) and low fat (20% fat, 0.8 g of protein per kg, the remainder carbohydrate) (46). This study results were also similar to Rodríguez-Hernández et al. study results (45). In addition, intrahepatic fat content also not showed statistical difference, 47% decreased in the low carbohydrate group and 42% decreased hepatic fat content in the low fat group.

Low-carbohydrate diets have been shown to promote weight loss, decrease intrahepatic triglyceride content, and improve metabolic parameters of patients with obesity (48). A meta-analysis investigated the long-term (6 or more months) effects of low-carbohydrate diets (≤45% of energy from carbohydrates) versus low-fat diets (≤30% of energy from fat) on metabolic risk factors by randomized controlled trials (48). Totally 2,788 participants met the predetermined eligibility criteria (from January 1, 1966 to June 20, 2011) and were included in the analyses. Both low-carbohydrate and low-fat diets lowered weight and improved metabolic risk factors. Compared with participants on low-fat diets, persons on low-carbohydrate diets experienced a slightly but statistically significantly lower reduction in total cholesterol, and LDL cholesterol, but a greater increase in high density lipoprotein cholesterol and a greater decrease in TG.

HFCS-containing beverages are associated with the development of NAFLD by hepatic DNL. Epidemiological studies linked HFCS consumption to the severity of fibrosis in patients with NAFLD, too. Recently, animal studies showed that excessive consumption of HFCS-55 increases hepatic Glut5 gene expression and TNF-alpha levels, gut-derived endotoxemia, endoplasmic reticulum stress, hepatic lipid peroxidation and apoptotic activity. The lipogenic and proinflammatory effects of fructose appear to be due to transient ATP depletion. Fructose can also raise intracellular and serum uric acid levels. Large prospective studies that evaluated the relationship between fructose and NAFLD are needed.

This article is dedicated to the Tuscany and Aegean people, the region of grape. All authors contributed equally during the preparation of this manuscript.