As an increasing proportion of surgeons mount their learning curves in laparoscopic liver resections, a larger percentage of liver surgery is being performed laparoscopically (1). Syn et al. (2) published an impressive statistical analysis of existing randomized controlled trials (RCT) and propensity-score matched (PSM) studies that model a long-term survival benefit in favor of laparoscopic over open resection for colorectal liver metastases (CRLM). Whilst this is an encouraging outcome, it is critical to analyze the studies included that led to these improved survival outcomes.

The analysis comprised of 2 well-conducted RCTs of mainly minor resections and 13 PSM studies. Whilst a well-conducted PSM may improve our ability to make causal inferences to that approaching a RCT, in this study’s context, it is key to ensure that relevant co-variates that are unrelated to the choice of the surgical approach but related to survival outcomes were included in the PSM model in order to reduce bias and increase accuracy of the measured outcomes (3). Also, most PSM studies reported in the surgical literature lack the associated model and diagnostics information to make an informed choice as to their quality and there is in fact a risk that they may “degrade inferences” if improperly implemented (4). It is key to scrutinize closely this meta-analysis that publishes a novel outcome of superiority of the laparoscopic approach, as we recognize the impact of public controversy that may arise from published data, as witnessed from the outcomes of the Laparoscopic Approach to Cervical Cancer (LACC) trial (5).

The oncological-related variables that are most likely to affect overall survival have been well described in literature, and are best summarized by several established clinical risk scores. The FONG score is an established and well-validated clinical score that predicts prognosis of patients who undergo CRLM hepatectomy, which comprises 5 key components—CEA level, size of largest hepatic tumor, number of hepatic tumors, disease free interval (DFI) from primary colorectal malignancy to liver metastasis, and node-positive primary malignancy (6). Along the years more clinical scores have been established, such as the Nordlinger score and the Basingstoke Predictive Index (BPI) which included similar key components—but in addition also took into account resection margins. BPI in particular also took into account degree of differentiation of the primary malignancy (7). These 3 particular clinical risk scores although originally designed in the open hepatectomy era, have been validated in more recent times for laparoscopic liver resections, demonstrating an ability to stratify patients into risk groups with significant difference in survival (8).

In addition to oncological-related variables, it would also be crucial that the included PSMs include patient demographic factors that would likely affect survival outcomes such as age and ASA status. As this study uniquely compares survival curves between two surgical approaches, the type of hepatectomy should also be included as a matched variable.

A review of the PSM studies in Table 1 illustrates the proportion of studies that included the abovementioned relevant variables. No study included DFI as a matched variable apart from Cannon et al. (9) who included Fong score in their matching process. Only 3 other PSMs included the other 4 components of the Fong clinical risk score, of which one of the 4 did not include age nor ASA status as matched variables. These 4 studies—Ma et al. (10), Lin et al. (11), Beppu et al. (12), and Cannon et al. (9) and the 2 included RCTs account for only 40.0% of the analysis’ population. 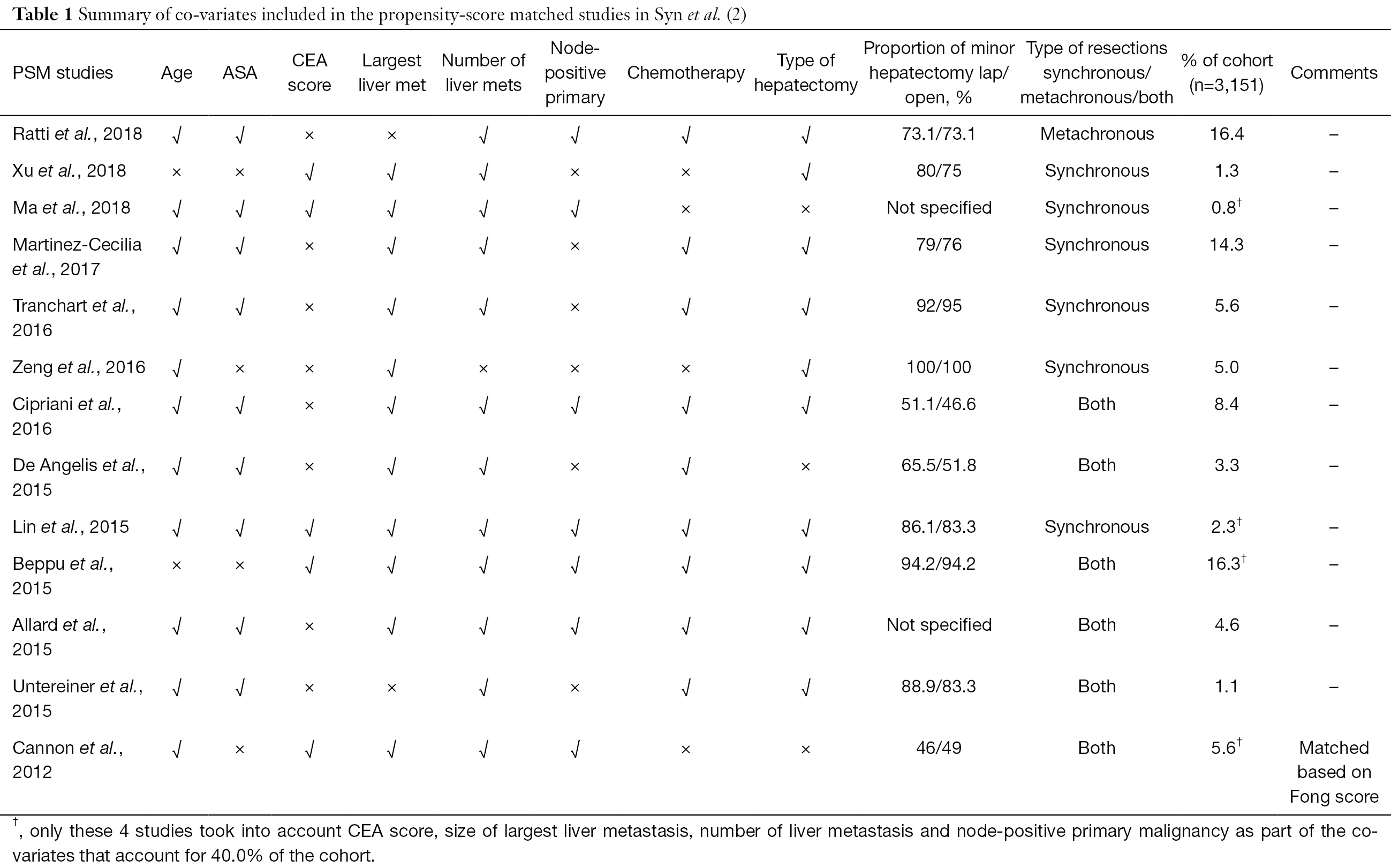 Lastly, the PSM models are deficient in accounting for any time-period bias. The proportion of hepatectomies performed laparoscopically has risen substantially over the last decade. As such, a significant proportion of the laparoscopic cases may have benefitted from modern day protocols such as earlier detection of metastasis or recurrences, improved access to advanced cross-sectional imaging and improved chemotherapy regimens with targeted adjuvant therapy options.

Having said that, improved neoadjuvant chemotherapy regimens have also allowed for cases that were initially irresectable or borderline resectable to proceed with curative surgery. Whilst conversion hepatectomies are unlikely to be a large proportion of CRLM resections, it would be useful to know which patients were given chemotherapy with the intent of conversion surgery, as these are likely to be patients with more advanced disease compared to those who are amenable to upfront hepatectomy.

Overall, this excellent synthesis of the results of the included RCTs and PSM studies suggest that laparoscopic approach is at least comparable to open approach for CRLM hepatectomies, although we are hesitant to conclude based on this meta-analysis that it is superior due to the limitations mentioned. Results of these studies are also likely to be attributed to surgeon expertise and high-volume hepatobiliary centers, as such may not be replicable in centers that are still mounting their learning curves. Critical to note is that (I) these results largely reflect outcomes of minor hepatectomies (only 2 PSM studies encompassing 14% of the overall meta-analysis study population included a significant proportion of major hepatectomies) and (II) none of the included studies recorded long term survival data greater than 10 years despite the fact that one of the key findings was modelling of an improved “cure rate” for laparoscopy at 10 and 15 years follow-up. Long-term outcomes and results from the most recent RCTs including major hepatectomy are eagerly awaited to support further pursuance of laparoscopic hepatectomies for CRLM.

Provenance and Peer Review: This article was commissioned by the editorial office, Hepatobiliary Surgery and Nutrition. The article did not undergo external peer review.