Short- and long-term outcomes after hemihepatectomy for perihilar cholangiocarcinoma: does left or right side matter?

Another factor, related to left or right-sided resections is the performance of concomitant portal vein resection and subsequent reconstruction (PVR). PVR is often required to achieve R0 resection in PHC (9-11). The greater length of the left portal vein facilitates reconstruction and may therefore be preferably performed in combination with right-sided resections. This may therefore influence outcomes of right- versus left-sided resection. After (extended) right hemihepatectomy, the biliary-enteric anastomosis is usually straightforward, using the cut segmental ducts of B4, B2 and B3 or only B2/3 for the jejunal anastomosis. After a left-sided resection, the proximal segmental ducts show more variation and usually require multiple anastomoses potentially leading to more biliary complications (12).

To date, literature on outcomes after right- and left-sided resections in PHC is conflicting and available data are limited (3,4). Therefore, we aimed to compare outcomes after left or right hemihepatectomy in our series of patients undergoing resection for suspected PHC. We present the following article in accordance with the STROBE reporting checklist (available at http://dx.doi.org/10.21037/hbsn-19-948).

Patients undergoing resection for hilar tumors suspected of PHC in a single tertiary center were retrieved from a prospectively maintained database. The study was conducted in accordance with the Declaration of Helsinki (as revised in 2013). The Institutional Medical Ethics Committee waived the need for individual informed consent and ethical approval (W19_408). Consecutive patients undergoing resection of the extrahepatic bile duct in combination with left or right hemihepatectomy for suspected PHC between 2000 and 2018 were included. Patients undergoing external bile duct resection only, or combined with central or minor liver resections were excluded.

For short-term outcomes, all patients undergoing external bile duct resection with hemihepatectomy on the suspicion of PHC were analysed, including patients with different diagnosis at final pathological assessment. Primary outcomes were severe morbidity (Clavien-Dindo grade ≥3) and 90-day mortality. Secondary outcomes were overall morbidity (including Clavien-Dindo grade 1 and 2), length of hospital stay and types of complications including bile leakage, liver failure and haemorrhage (all graded by the International Study Group of Liver Surgery (ISGLS) grading system, with grade B and C considered clinically relevant) (14-16). Recently, all pathology reports were revised according to the International Collaboration on Cancer Reporting (ICCR) guideline (17,18). According to this guideline, a margin of <1 mm at any resection plane, including the periductal dissection plane, was considered as residual disease.

For oncological outcomes, only patients with pathologically proven PHC were included in the analysis. Primary outcome was overall survival, calculated as survival in months after surgery. Surviving PHC-patients were censored at last date of follow-up. Recurrence was defined as local (hilar, at the hepaticojejunostomy or local lymph nodes) or distant recurrence (distant lymph nodes, liver, lung or other metastases).

Descriptive statistics were used to describe the data. Continuous variables following a normal distribution were described by mean and standard deviation or median and interquartile range in case of a non-normal distribution. Kaplan-Meier method was used to calculate overall survival and the reverse Kaplan-Meier based method was used to calculate median follow up. Comparison between the two groups were analysed using chi-square or Fisher exact test for proportions, t-test for means and Mann-Whitney Test for medians. Survival curves were compared using the log-rank test. Predictors of overall survival (excluding postoperative mortality) were analysed using univariate and multivariate Cox-regression analysis. Factors with P values <0.200 at univariate analysis were included in the multivariate analysis, as well as the two variables of interest in this study (right versus left hemihepatectomy and with/without portal vein reconstruction). Statistical analyses were performed using SPSS version 25.0. Survival curves were displayed using GraphPad Prism 8. 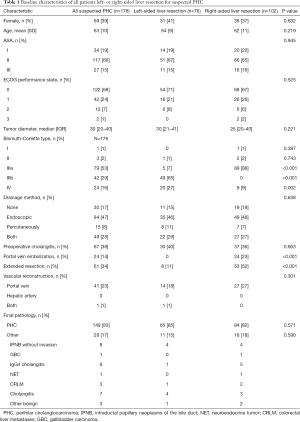 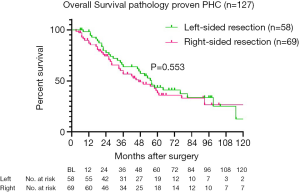 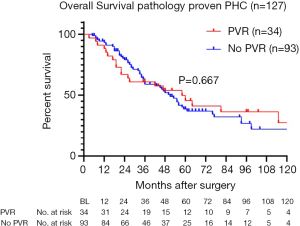 Govil and colleagues reported on their approach to offer patients with type IIIb and IV tumors left liver resection rather than extended right hemihepatectomy. Similar survival of patients undergoing left and right-sided resections was observed, as in the present study. Although this study only included 36 patients, a higher incidence of postoperative liver dysfunction was observed among 13 patients with right hemihepatectomy (5 out of 13) compared to 23 patients with left hemihepatectomy (0 out 23) (P=0.003), whilst severe complications (Clavien-Dindo grade ≥3) occurred in 69% after right-sided resection and 43% after left-sided resection (P=0.177) (3). Conversely, Lee et al. (4) showed more severe complications (Clavien-Dindo grade 3A or higher) after left-sided resection (34.3%) for type III tumors compared to right-sided resection (10.7%) (P=0.002). In the latter study, again, survival was comparable between 102 patients with Bismuth-Corlette type IIIa undergoing right-side resections (5 y OS 33%) compared to 35 patients with type IIIb undergoing left-side resections (5 y OS 35%). Only patients with Bismuth-Corlette type III were included in this study, and the rate of R0-resections was comparable in both groups (82.5% right-sided group and 85.7% left-sided group) (4). Our reported R0-resection rate is lower compared to the R0-resection rates reported in literature, possibly due to our recent efforts to revise all pathology reports according to most recent guidelines. This action resulted in reclassification of residual disease based on a margin of <1 mm classified as R1, including all (circumferential, periductal dissection) planes (18).

Although survival benefits of standard PVR along with right hemihepatectomy have been suggested (19), the policy in our unit is to perform PVR selectively only when the vein is directly involved. Outcomes after selective PVR are also controversial; in a meta-analysis performed in 2012 there were nine studies reporting on mortality of which two showed a higher risk of postoperative mortality after PVR while seven did not. Although in our study the liver failure rate was higher after PVR compared to no PVR, the meta-analysis including all five studies reporting on post-hepatectomy liver failure showed no significant differences between patients undergoing resection with or without PVR (11).

The results of the present study should be interpreted in light of several shortcomings. First, the retrospective design and the wide time-frame in which patients were treated. Several improvements have been made in treatment of patients with PHC, potentially influencing results over time. Because PVE is mainly performed in patients undergoing right-sided resections, subsequent improvements in liver failure and mortality may have influenced the comparison of right-sided and left-sided resections. Univariate and multivariate cox regression analysis performed in this study, showed that no other factors but ASA classification 3 or 4 independently predicted survival. This analysis should be performed in a larger cohort to accurately investigate determinants for survival in this population, for example in a multicentre combined cohort such as coordinated by the International Registry of the Perihilar Cholangiocarcinoma Collaboration Group (21).

Reporting Checklist: The authors have completed the STROBE reporting checklist. Available at http://dx.doi.org/10.21037/hbsn-19-948

Conflicts of Interest: All authors have completed the ICMJE uniform disclosure form (available at http://dx.doi.org/10.21037/hbsn-19-948). TMvG serves as an unpaid editorial board member of Hepatobiliary Surgery and Nutrition. The other authors have no conflicts of interest to declare.

Ethical Statement: The authors are accountable for all aspects of the work in ensuring that questions related to the accuracy or integrity of any part of the work are appropriately investigated and resolved. The study was conducted in accordance with the Declaration of Helsinki (as revised in 2013). The Institutional Medical Ethics Committee waived the need for individual informed consent and ethical approval (W19_408).