Four-week supplementation before bariatric surgery has shown to reduce liver volume and facilitate bariatric procedure in obese patients (6). In liver surgery, experimental models have demonstrated that Ω3 FA allows reduction of liver fibrosis, improvement of cirrhotic liver regeneration (7), and protection from ischemia/reperfusion injury (8). According to these premises, a benefit of supplementation of Ω3 FA has been hypothesized for patients undergoing liver surgery.

In this setting, the recent randomized trial by Linecker et al. (9) published in the October, 2019 issue of Journal of Hepatology provides major information on the impact of perioperative Ω3 FA in patients undergoing liver surgery. The study is a multicentric, double-blind trial and has a robust methodology, which confers high relevance to the obtained results. A total of 261 patients have been included and randomized to the administration of (I) two doses of 10 g highly refined fish oil containing eicosapentaenoic and docosahexaenoic acid or (II) placebo. Inclusion criteria are strict, and only adult patients without coagulopathy (as assessed by INR and platelet count) undergoing at least resection of 1 liver segment or 3 wedge resections were selected. Cirrhotic patients and pregnant women were excluded. Results are very detailed, including complete analysis of the laboratory parameters and postoperative outcomes in the first 30 days. This study shows that preoperative intravenous infusion of Ω3 FA does not reduce morbidity and mortality after liver surgery. Even secondary analysis including only patients undergoing major liver resections and only those who received Pringle maneuver fails to demonstrate some advantages in morbidity or mortality related to the administration of Ω3 FA. Bioavailability of Ω3 FA is confirmed by the modifications of blood levels of triglycerides, increased in the Omegavan® group, whereas no significant change was found in levels of platelet, INR, transaminases. Of note, three patients without previous cardiac diseases in the Omegavan® group died for cardiac events (arrhythmia, ischemia, unclear). In contrast, the placebo group revealed no lethal cardiac event (the difference was not statistically significant). Even if this finding does not allow any relevant conclusion about the risk of cardiac event in patients receiving Ω3 FA supplementation in this setting, it represents a possible concern. The authors conclude that administration of two doses of Ω3 FA in patients undergoing hepatectomy is not useful.

Several previous randomized trials analyzing the role of Ω3 FA supplementation gave different results, and advocated a positive effect of Ω3 FA administration on postoperative outcomes (Table 1). Zhu et al. (10) administered Omegavan® 10% during 7 postoperative days after liver transplantation, showing in the Ω3 group lower score of portal inflammation, decreased level of ALT and PT at day 9, and a reduced length of hospital stay. Gong et al. (11), in a population of patients undergoing minor and major hepatectomies, found that Omegavan® administered during 5 days starting 12 to 24 hours after surgery was able to significantly reduce the total complication rate (25.4% in the control group versus 41.7% in the treatment group) and the length of hospital stay. At postoperative day 3 and 7, a significant reduction of leucocytes, transaminases and bilirubin was observed in the Ω3 FA group. The decrease of prothrombin time was significantly lower in the Ω3 group. Ibrahim and colleagues (12) studied the effect of Ω3 FA on liver donors. Their protocol consisted in the administration of an enriched Ω3 FA emulsion the day before surgery and the day of surgery. The authors found lower values of transaminases, white blood cells and C reactive protein in the omega-3 group at postoperative day 1, 3, 5, 7, and higher level of hepatocyte growth factor at postoperative day 1, 3, 5. Regeneration index and liver volume at 1 month were significantly higher in patients receiving Ω3 FA supplementation. No major complication was observed in both groups and no transfusion was needed. Zhang et al. (13) administered Omegavan® 10% 100 mL during 5 days postoperatively to cirrhotic patients who underwent hepatectomy for cancer. They demonstrated a significant reduction of overall complications (50.32% in the control group versus 29.30% in the treatment group), infectious complications (19.35% in the control group versus 9.55% in the treatment group), intra-abdominal infections (7.74% versus 1.91%), In the treatment group, a reduction of ALT and C reactive protein was found at day 3 and 5. As shown in Table 1, these previous studies suggested a positive effect of omega-3 supplementation on clinical outcomes, whereas the recent randomized trial by Linecker et al. did not. 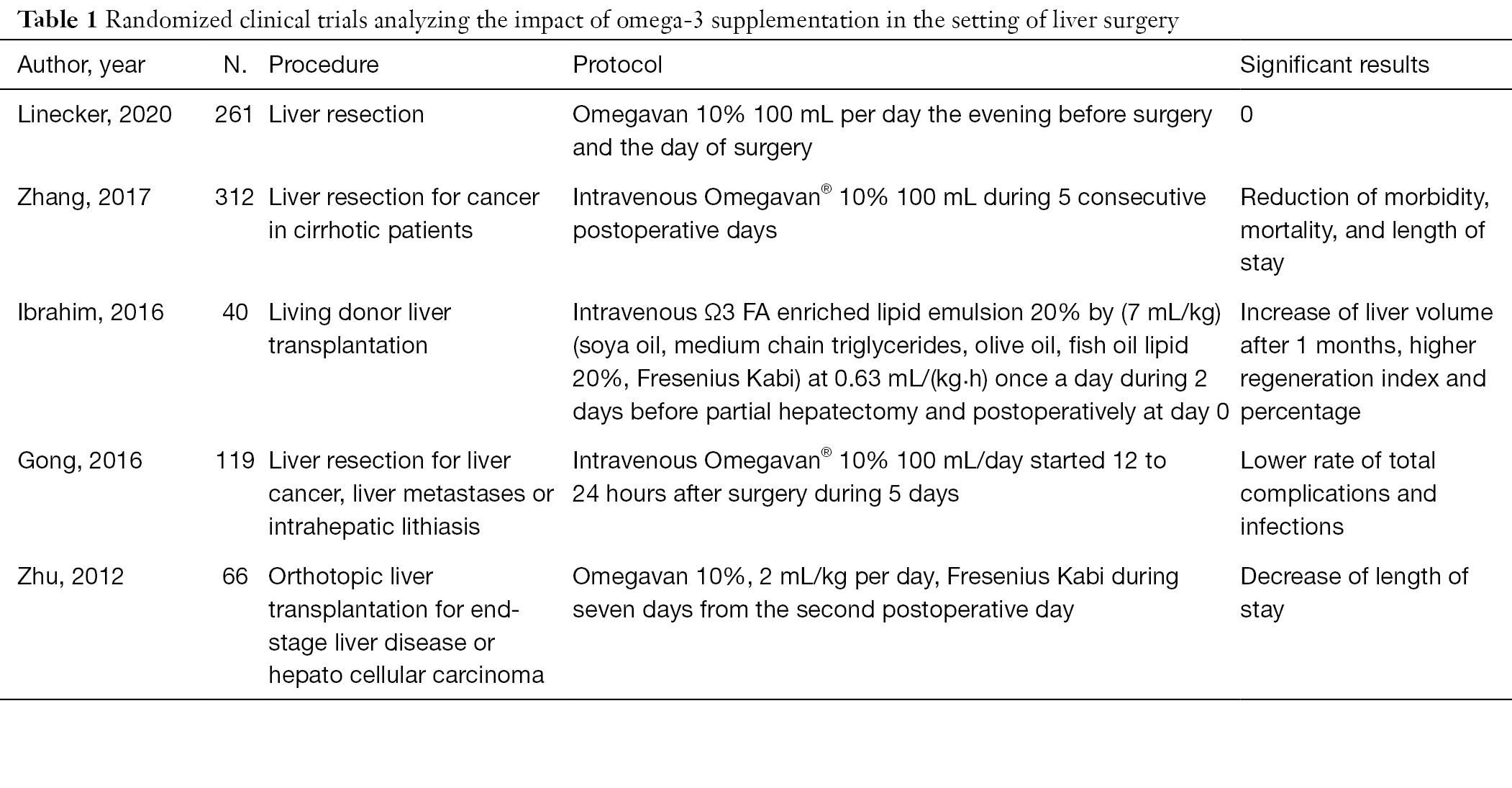 How can we explain these different findings? Has the administration of Ω3 FA a clinical impact in patients candidates to liver surgery?

The mentioned studies, even if they are all randomized trials, are heterogeneous in patients’ inclusion, type of liver surgery, protocols of Ω3 FA administration and outcomes. Only Linecker et al. (9) and Ibrahim et al. (12) choose a protocol of 2-day administration of Ω3 FA, (one day before surgery and the day of surgery). However, the latter study included living liver donors and performed an analysis of liver volume and regeneration, whereas the first focused on postoperative complications.

An important consideration is that Ω3 FA have two potential main effects in the setting of liver surgery: (I) an antioxidative/anti-inflammatory effect, and (II) an impact on liver defattening and regulation of hepatocytes metabolism (14). In the study by Linecker et al. (9), only the antioxidative/anti-inflammatory effect may be detected, because the patients were not followed beyond 30 days and the liver volume and function in the late postoperative period were not analyzed. On the other hand, Ibrahim et al. demonstrated the impact of such a short-period administration of Ω3 FA on liver regeneration, with liver volumetry and analysis of regeneration index at 30 days. Both studies failed to demonstrate a clinical impact on morbidity and mortality of a 2-day Ω3 FA supplementation.

The remaining 3 studies (10,11,13) were based on a longer period of Ω3 FA administration, ranging from 5 to 7 days. These studies were also heterogeneous: Zhang et al. focused on cirrhotic patients (13), Zhu et al. included patients undergoing liver transplantation (10). These studies demonstrated a clinical impact of Ω3 FA supplementation on short-term clinical outcomes, showing a reduction of postoperative morbi-mortality rate (11,13), infectious complications (11), and length of hospital stay (10,13). Even if these data are difficult to interpret, because of the differences of patients characteristics, we can hypothesize that a longer period of administration of Ω3 FA emulsions may have a stronger clinical effect in the setting of liver surgery.

In conclusion, the study of Linecker et al. has a high methodological quality, and questions the clinical utility of Ω3 FA supplementation. Their 2-day protocol did not have any impact on postoperative morbi-mortality. It would be interesting to assess a third arm of patients receiving supplementation during a longer period (5–7 days), like in the studies showing a positive clinical effect.

So, several questions are opened by the study by Linecker et al.: (I) has the Ω3 FA supplementation a clinical effect? (II) what is the most effective protocol of Ω3 FA administration in the setting of liver surgery? (III) what kind of patients may benefit from 3 FA supplementation?

Future trials are needed to clarify these interesting topics, and may have a potential impact on routine clinical practice in the setting of liver surgery.

Provenance and Peer Review: This article was commissioned by the editorial office of Hepatobiliary Surgery and Nutrition. The article did not undergo external peer review.

Conflicts of Interest: Both authors have completed the ICMJE uniform disclosure form (available at http://dx.doi.org/10.21037/hbsn.2020.03.02.). The authors have no conflicts of interest to declare.