Hepatocellular carcinoma (HCC) is the sixth most common cancer and the fourth most common cause of cancer-related death worldwide (1). The occurrence and development of HCC is mostly related to hepatitis B virus (HBV) or hepatitis C virus (HCV) infection, excessive alcohol intake, obesity, and rare genetic diseases (2). However, the key driving factors for HCC development are still unclear. Although considerable progress had been achieved in the clinical diagnosis and treatment of HCC, patients still have a poor prognosis (3). Further understanding of the pathogenesis mechanism of HCC could provide effective help for treating patients. Next-generation sequencing (NGS) technology is a revolutionary change in traditional sequencing methods because it can detect multiple genetic variations with high sensitivity (4). Although many studies have focused on oncogene characteristics, the genome alteration map of HCC patients has not been fully clarified. In this study we aimed to investigate the characteristics of HCC gene mutations and its relationship with clinical related factors by analyzing the results of gene mutation detection by NGS in 165 patients (168 HCC tissue specimens). We present the following article in accordance with the STROBE reporting checklist (available at http://dx.doi.org/10.21037/hbsn.2019.09.17).

A total of 165 HCC patients who received genetic testing at the Affiliated Hospital of Qingdao University from January 2017 to December 2018 were enrolled. There were 146 males and 19 females with a median age of 55 years (range, 27–78 years). Among them, 140 cases were HBsAg positive, 3 cases were HCVAb positive, and 1 case was positive for both HBsAg and HCVAb. The remaining 21 cases were negative for hepatitis virus markers. The diagnosis of HCC in all specimens, including 158 resected specimens and 10 liver biopsy specimens, were pathologically confirmed. The patient information, serological test results, and pathological characteristics of tumors were collected from the Affiliated Hospital of Qingdao University. All patients signed a written informed consent. The study was conducted in strict compliance with the Helsinki Declaration and was approved by the Ethics Committee (ethics approval number: QDFYKYLLL-20161212).

In this study, 2 isolated tumors with different genome characteristics were detected in 3 patients. Based on the experience of Duan et al., these 2 tumors from 1 patient were regarded as an independent lesion in this study (6). A total of 1004 genomic alterations from 258 genes were detected in 168 HCC tumors from 165 patients. The average alteration frequency was 5.8 alterations per patient. Out of 168 HCC specimens, TMB values were calculated in 160 HCC specimens, and the median TMB was 5.4 Muts/Mb (range, 0–28.4 Muts/Mb) and the 75% TMB was 7.7 Muts/Mb. MSI was not found in this group of patients. 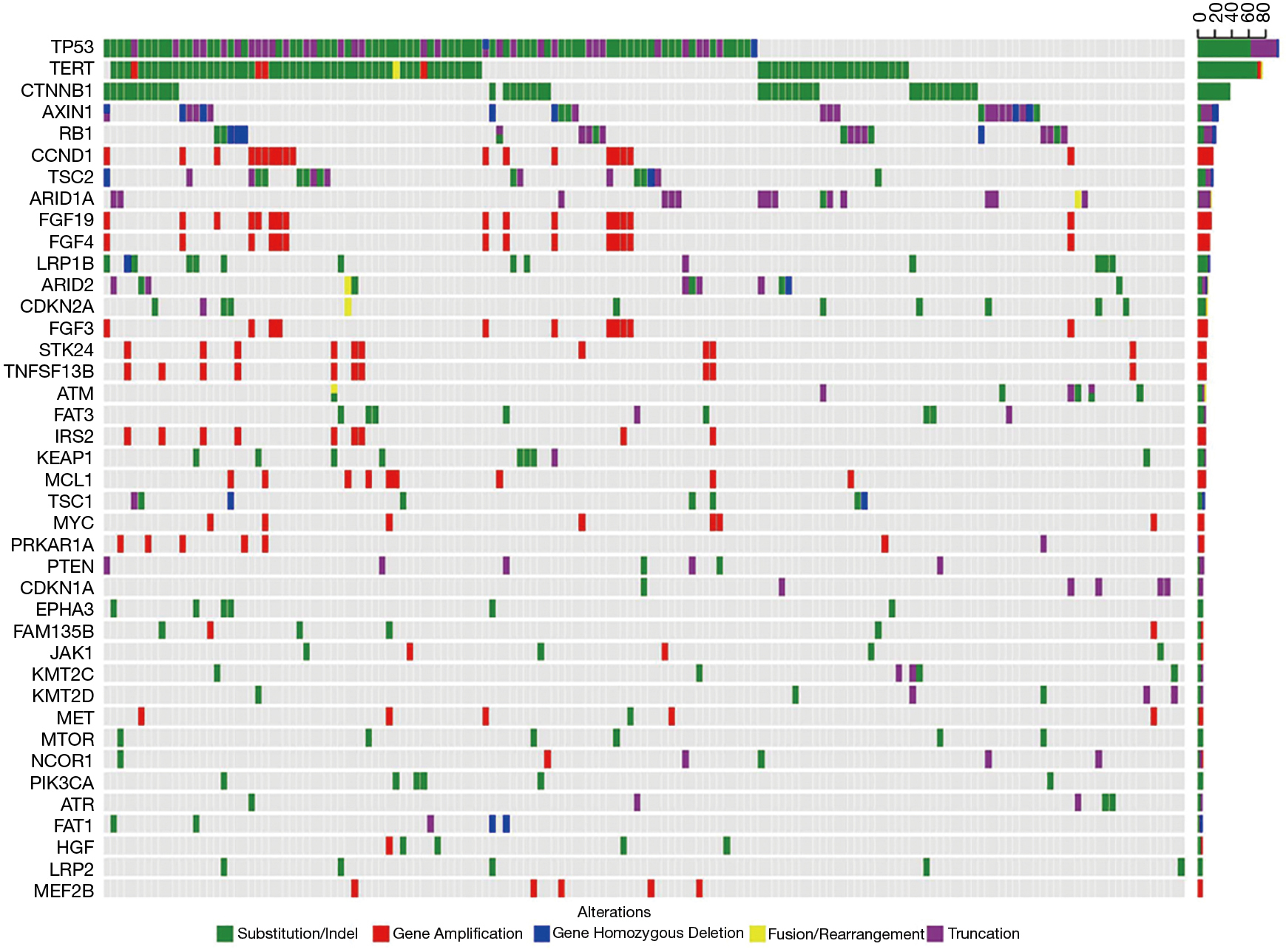 The correlation between mutated genes and clinicopathological features

Based on NGS technology, we constructed a genomic profile of HCC patients in China. The most commonly mutated genes were TP53 (56.5%), TERT (45.2%), and CTNNB1 (22.6%), which were similar to those reported by Ahn et al., but different from the report of Totoki and Schulze, where TERT was the most common mutation (Table 2) (7-10). In this study, we analyzed the genome variation of HCC patients in The Cancer Genome Atlas (TCGA) database, and the results were similar to those of Japanese and European populations. We deduced that the etiology difference was a possible reason. There are studies that have reported that HCV infection and alcoholic cirrhosis (P=0.03) were the most common groups in TERT mutated HCC patients, but not in HBV infected patients (P<0.001) (11). In addition, studies also reported that the mutation frequency of TP53 was higher in HCC caused by HBV infection than those without HBV infection (41% vs. 16%, P<0.001), while the mutation of CTNNB1 was found more in patients without a HBV infection than those with an infection (15% vs. 44%, P<0.001) (12).

Tumors usually have its own unique mutation spectrum, and the substitution frequency of different base pairs is different. Studies have shown that C:G>T:A conversion is a common mutation type in many solid tumors (13). G:C>T:A conversion has been reported to be the main mutation in HCC (14). All of these reports have supported that G:C>T:A conversions are the most common mutations in HCC patients, with slightly varying proportions among different populations. According to the description by Li and Mao (15), G conversion (G>A, G>T, G>C) is common in HCC patients. In this study, the proportion of G conversion was 38.8% (225/580), which further confirmed that the most common mutation in Chinese HCC patients was G conversion. The C:G>A:T conversion seemed to occur more commonly in HBV-related HCC than in HCV-related HCC (16), even though there were limited C:G>A:T conversions in this study. Therefore, it was not possible to further explore relevant factors.

In this study, mutations in different carcinogenic pathways of HCC patients were obtained. However, due to the lack of sample information used for calculating the exact mutations in different carcinogenic pathways, we failed to compare mutated pathway information with the TCGA database. In Chinese HCC patients, the most common mutations were P53 pathway related genes, followed by the Wnt pathway, telomere repair pathway, PI3K/mTOR pathway, chromatin remodeling related pathways, and cell cycle related pathways. Mutations in these carcinogenic pathways are also commonly reported in many other studies on HCC among different populations (Table 3) (7-9). However, mutations in the P53 pathway, telomere repair, and Wnt pathway related genes are the most common in all studied populations, which indicates the common occurrence and development of HCC in all populations.

TMB is defined as the number of somatic mutations, including point mutations and insertion deletions, within an average of 1 Mb in the sequenced cancer genome. It is becoming one of the important parameters used to predict the sensitivity of immunologic checkpoint inhibitors (17). For example, according to a report by Rizvi, the top quartile of the number of mutations, no less than 178 mutations, was considered as TMB high (18). Johnson found that high TMB (45.6 vs. 3.9 Muts/Mb in PD-L1 response/non-response patients, respectively), was associated with high sensitivity to PD-1 or PD-L1 immunotherapy strategies in non-small cell lung cancer and melanoma (19). Shrestha et al. reported that the overall prognosis of HCC patients with TMB-H (defined as a quantity of mutations one standard deviation above the average for the dataset) was significantly worse than that of patients with TMB-L (defined as a quantity of mutations one standard deviation below the average for the dataset) (20). TMB could be used as a biomarker to select immunotherapy for HCC patients. In this study, the mutation frequency of CTNNB1 in patients with TMB-H (≥7.7 Muts/Mb) was significantly increased. This is the first report of the correlation between CTNNB1 and TMB-H in HCC. However, its mechanism still needs further study. MSI, dysregulated by the mismatch repair (MMR) system, was first found in hereditary non-polyposis colorectal cancer, and has been involved in the pathogenesis of a variety of gastrointestinal cancers and other cancers (21). The detection rate of MSI-high (MSI-H) in colorectal cancer is about 15–20% (22). There are few reports of MSI-H status in HCC patients. Goumard et al. analyzed MSI in 164 HCC specimens, but did not find a specimen with an MSI-H phenotype (23). Here, we also did not find any MSI-H phenotypes in Chinese HCC patients. Fabrizio et al. identified the TMB and MSI in 6,004 paraffin specimens of colorectal cancer. The detection rate of MSI-H status was 5.0%, and the distribution range of TMB was 0–746.9 Muts/Mb, with a median of 4.5 Muts/Mb. There was a significant correlation between MSI-H status and TMB-H (>11.7 Muts/Mb) (P<0.0001) (24). In this study, the distribution of TMB in HCC ranged from 0.0 to 28.4 Muts/Mb, with a median of 5.4 Muts/Mb. Compared to colorectal cancer, HCC has the characteristics of centralized TMB distribution, small dispersion, and microsatellite stability.

As we know, TP53 is a tumor suppressor gene which can inhibit the occurrence and development of cancer. Calderaro et al. reported that TP53 mutations are associated with poor tumor differentiation (OR =6.41, P<0.001) and microvascular invasion (OR =2.03, P=0.02) (25). Consistent with previous studies, the mutation of TP53 in Chinese HCC patients was independently correlated with poor biological characteristics of tumors such as Edmondson grade III-IV and microvascular invasion. In this study, TERT was the second most commonly mutated gene. Except for the invasion of the liver capsule by tumors, there was no significant correlation between the mutation of TERT and age, sex, size of tumors, number of tumors, microvascular invasion, differentiation tumor grade, or TNM stage. This result is consistent with the report of Lee et al. (26). This suggests that TERT gene mutations are not easily expressed in the biological characteristics of tumors, which may be related to the fact that the mutation of TERT is an early step in the development of HCC (27). In addition, we found that TP53 was highly correlated with TERT, and that co-mutations of TP53 and TERT occurred in 32.1% (54/168) of patients. Moreover, the co-mutation of TP53 and TERT was more likely to occur in patients with Edmondson grade III–IV, invasion of the hepatic capsule, and microvascular invasion.

As a key gene in the Wnt/beta-catenin signaling pathway, CTNNB1 is one of the most common mutations in HCC in most populations. The mutation of CTNNB1 was reported to be significantly correlated with age in populations less than 60 years old (P=0.019) with moderately/poorly differentiated HCV-related HCC (P=0.015) (28). Cleary et al. also reported that CTNNB1 mutations were more common in HCV-related HCC than HBV-related HCC (37.5% vs. 62.5%, P=0.038) (29). Similarly, we found that the mutation frequency of CTNNB1 in HBV-infected patients was lower than that in non-HBV-infected patients (P=0.021). Also, the proportion of Edmondson grade I–II, AFP <25 µmg/L, and those without a background of hepatitis B was higher in the patients with a CTNNB1 mutation than those without a CTNNB1 mutation, indicating that the mutation of CTNNB1 was associated with better clinical characteristics. Additionally, in HCC cases with CTNNB1 mutations compared to those without mutations, Cleary et al. observed a lower recurrence rate (12.5% vs. 49.3%) and a prolonged disease-free survival (29), which is similar to the results of this study and also supports the inference that CTNNB1 mutations are related to a better prognosis.

The limited number of samples coming only from a single center is a shortcoming of this study. For future studies we will collect multi-center samples and try to describe the genomic alteration map of Chinese HCC patients.

Thanks to OrigiMed for the technical support with NGS.

Reporting Checklist: The authors have completed the STROBE reporting checklist. Available at http://dx.doi.org/10.21037/hbsn.2019.09.17

Conflicts of Interest: All authors have completed the ICMJE uniform disclosure form (available at http://dx.doi.org/10.21037/hbsn.2019.09.17). The authors have no conflicts of interest to declare.

Ethical Statement: The authors are accountable for all aspects of the work in ensuring that questions related to the accuracy or integrity of any part of the work are appropriately investigated and resolved. All patients signed a written informed consent. The study was conducted in strict compliance with the Helsinki Declaration and was approved by the Ethics Committee (ethics approval number: QDFYKYLLL-20161212).