Hepatocellular carcinoma (HCC) is the most common type of liver cancer, accounting for 80-90% of all cases. Asian countries account for 75-80% of the 650,000 HCC cases reported globally each year; of particular note is the fact that China alone accounts for 55% of HCC cases worldwide (1). Currently, HCC ranks as the second leading cause of cancer-related deaths in males and the third leading cause of cancer-related deaths in females in China, with a total mortality rate of 26.26/100,000. Moreover, the incidence of HCC has increased over the past decades, and now it is the second most common cancer in urban areas and the most common in rural areas of China, with a total prevalence of 26-32/10,000 and a prevalence as high as 70-80/10,000 in some areas (2,3).

Evidence has shown that surgical resection and liver transplantation may offer the best potential for treating HCC but are only available to patients whose tumors are detected early. The overall 5-year survival rate is 40%, but liver resection to treat early HCC could lead to a 5-year survival rate of 60-70% (4-6). Over the past few decades, a series of measures for standardized management of HCC has been implemented by the Chinese Government, and the Chinese Guidelines on HCC—Expert Consensus on the Treatment Standards for Hepatic Carcinoma—were drafted in 2009 (7). Currently, standard treatment in China is comprehensive therapy predominantly in the form of surgery. As clinical techniques have developed in China, new techniques have also become available, such as laparoscopic surgery and minimally invasive robotic surgery. However, most patients with HCC in China still present with advanced-stage disease (8), thus reducing the chance of curative treatment. Accordingly, strategies to screen for and diagnose HCC at an earlier stage are urgently needed in China when curable interventions can be offered to achieve long-term disease-free survival for patients with HCC (9).

Several cohort studies have shown that screening high-risk populations with HBV- or HCV-related chronic liver disease improves the rate of early HCC detection and the rate of curative treatment (10-12), and such screening is also recommended by many HCC guidelines worldwide, including the guidelines established by the American Association for the Study of Liver Disease (AASLD), the National Comprehensive Cancer Network (NCCN), and the Asian Pacific Association for the Study of the Liver (APASL). Unlike in the United States, Europe, and other Asian countries such as Japan where HCV is the most significant etiological factor for developing HCC, in China approximately 85% of HCC cases are HBV-related while only 10% of cases are HCV-related and a small minority involve HBV and HCV (2,3). Thus, people with HBV infection are the largest population at risk of developing HCC in China. In fact, 93 million Chinese are HBV carriers, accounting for 2/3 of such patients worldwide, and about 20 million of these individuals have chronic HBV infection.

In Asia, Japan and South Korea have implemented a nationwide screening and surveillance program for populations at risk of developing HCC (13). According to the HCC Guidelines in Japan, ultrasonography and measurement of α-fetoprotein (AFP), the lens culinaris agglutinin-reactive fraction of AFP (AFP-L3), or des-γ-carboxyprothrombin (DCP) should be performed at intervals of 3-4 months in the highest-risk group (patients with HBV- or HCV-related liver cirrhosis) and at 6-month intervals in the high-risk group (patients with HBV- or HCV-related chronic liver disease or liver cirrhosis due to other causes) (14,15). Currently, AFP, AFP-L3, and DCP are widely and routinely used to screen for HCC in Japan, and these tests are covered by Japan’s national health insurance as serological biomarkers to screen for HCC in clinical settings. Since most high-risk patients were closely followed before developing HCC, HCC nodules were detected in the early stage in more than 60% of patients in Japan (16).

Similarly, Taiwan also established a screening and surveillance program to screen patients with cirrhosis every 3-6 months and patients with no cirrhosis every 6-12 months. However, there is no government-funded screening and surveillance program to screen for HCC in high-risk populations in Hong Kong or other parts of China. Thus, a well-considered strategy of screening high-risk populations with HBV-related chronic liver disease is urgently needed in China to facilitate the early detection of HCC.

The Chinese Guidelines on HCC recommend that ultrasonography and AFP measurement be performed every 6 months for the population ages 35-40 at risk of developing HCC (17). Ultrasound is the imaging tool most often used to screen for and diagnose HCC because it is simple, inexpensive, non-invasive, and allows real-time observation. However, the success of ultrasound depends on the expertise of the physician, the ultrasound equipment available, and the echo texture of the liver, so the actual sensitivity of ultrasound is difficult to assess due to the lack of a definitive standard for HCC (18,19). In China, the serum biomarker AFP is considered a useful and feasible tool for HCC screening and early diagnosis. The clinical usefulness of AFP in China has been confirmed by a randomized controlled trial in 2004 that involved 18,816 Chinese patients (20). However, the sensitivity and specificity of AFP vary widely, and the total AFP is not always specific, especially when HCC is in its early stages. AFP has been found to have a sensitivity of 41-65% and specificity of 80-90% when detecting HCC given an AFP cut-off of 20 ng/mL, but an important fact to remember is that up to 50% of patients with HCC have an AFP level below 20 ng/mL, and elevated levels of AFP are also found in patients with liver diseases other than HCC, including viral hepatitis, at a rate of 10-42% (21,22). In addition, many factors hamper HCC diagnosis in clinical practice. Some patients may have high levels of AFP but no space-occupying lesions according to imaging while others may test negative for AFP but have lesions smaller than 1 cm or no characteristic lesions according to imaging. Thus, AFP cannot be used as the sole tool to screen for and diagnose HCC.

The clinical usefulness of serum DCP levels to screen for and diagnose HCC has been noted since 1984. Numerous studies have reported that the combination of DCP and AFP has a sensitivity of 84% and a specificity of 83% and that the combination of DCP and AFP-L3 has a sensitivity of 89.5-89.8% and a specificity of 41.7-66.7% when detecting small HCC ≤3 cm in size (23-26). Moreover, many studies have suggested that DCP could also be used to assess the progression of HCC, possibly serving as an indicator of HCC recurrence after curative therapy, as a good predictor of the presence of vascular invasion and as a way to select recipients of liver transplants, and as a key to the development of new chemotherapeutic strategies to treat HCC (16). However, DCP is currently approved in Japan, Korea and Indonesia (27), it has not been approved in China until now.

According to evidence-based medicine (EBM), systematic evaluation needs to be performed to assess the screening and diagnostic value of DCP in Chinese patients with HCC, and large-scale, multi-center studies need to be performed to provide strong supporting data. Accordingly, the current authors and their colleagues launched a project in 2012 to systematically evaluate the usefulness of DCP in early detection of HCC in China. This project involved retrospective studies as well as a prospective study involving four noted hospitals in Chongqing, Beijing, and Tianjin. This is the first large-scale, multi-center study of DCP’s usefulness in detecting early HCC performed in China. According to the current research results involving 336 patients with HCC and 252 patients with liver diseases other than HCC conducted in the Southwest Hospital, Third Military Medical University in Chongqing (Figure 1), there is no significant correlation between serum levels of DCP and AFP (R2=0.0179); DCP had a total sensitivity of 74% while a combination of DCP and AFP had a sensitivity of 84%, which is higher than either DCP or AFP alone. Moreover, DCP resulted in a specificity of 56% with a cut-off value of 40 mAU/mL and 94% with a cut-off value of 100 mAU/mL (28). 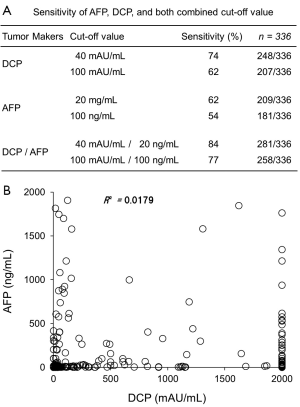 Figure 1 The clinical usefulness of DCP in detecting HCC in Chinese patients. A. The sensitivity of AFP, DCP, and both combined; B. The relationship between AFP and DCP (Data are from a prospective study of 336 patients with HCC seen by the Southwest Hospital, Third Military Medical University in Chongqing)

In conclusion, the current authors and their colleagues conducted the first large-scale, multi-center study to assess the clinical usefulness of DCP in Chinese patients with HCC. The prospective study conducted in one of centers showed that DCP can help to detect HCC in its early stages and facilitate definitive treatment. The clinical use of DCP is urgently needed to facilitate early detection of HCC. This is especially true for China, which accounts for 55% of HCC cases worldwide.