We are now beginning to understand that the gut dysbiosis is a risk factor for various human diseases including inflammatory bowel diseases, allergies, metabolic disorders and liver disease. An increasing number of studies have also suggested that gut microbiota is closely associated with tumors such as colorectal cancer. Increasing impact of gut dysbiosis is recognized with the progression of liver injury from mild fatty liver disease to advanced liver cirrhosis (1), where the enterohepatic circulation is considered to strengthen a relation between gut microbiome and the liver. However, the clinical studies suggesting the linkage of gut dysbiosis with hepatocellular carcinoma (HCC) are scarce and inconclusive. The insight on the role of gut microbes in hepatocarcinogenesis mainly comes from animal experiments (2).

Modulation of the gut microbiota by probiotics has been tried in experimental studies aiming at the suppression of hepatocarcinogenesis (Table 1). Zhang et al. (8) reported that the administration of probiotics VSL#3, a probiotic combination of eight strains of Lactobacilli, Bifidobacteria and Streptococcus, decreased tumor growth and multiplicity in the liver and markedly improved the enteric dysbiosis, intestinal inflammation and endotoxemia in rats given diethylnitrosamine (DEN). Endo et al. (9) reported that the butyrate-producing probiotic MIYAIRI 588 significantly decreased the number and sizes of liver tumors in rats given choline-deficient/L-amino acid-defined (CDAA) diet. They also noted that the probiotics suppressed portal endotoxemia and maintained intestinal tight-junction proteins. These studies have suggested that the probiotics suppresses development and growth of HCC by protecting endotoxin-mediated liver inflammation, fibrosis and carcinogenesis. 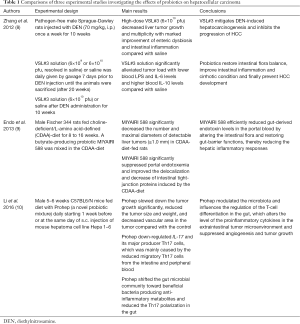 Last year, Li et al. (10) published another interesting study in Proceedings of the National Academy of Sciences of the United States of America, which reported that the modulation of gut microbiota by a novel probiotic mixture Prohep suppressed subcutaneous (s.c.) HCC growth in mice. Prohep is a combination of three representative probiotics, i.e., Lactobacillus rhamnosus GG, viable E.coli Nissle 1917 and heat-inactivated VSL#3. Li et al. revealed that Prohep slowed down the s.c. tumor growth and reduced the tumor size and weight (Table 1). This report is especially interesting because the authors presented novel insights into the mechanism by which probiotics suppressed the tumor growth (Figure 1). Namely, they proved that the effect of Prohep was not related to the reduction of tumor cell proliferation or the enhancement of tumor cell apoptosis but related to the hypoxia attributable to the suppression of tumor angiogenesis. It is well known that the growth of HCC relies on the angiogenesis, the formation of new vasculature from pre-existing blood vessels, for an adequate supply of oxygen and nutrients (11). Li et al. (10) further noted that the decreased vascular area in the tumor was associated with the down-regulation of angiogenic growth factors and receptors, such as FLT-1, ANG2, KDR, VEGFA, and TEK, and also related to the decreased population of Th17 subset within the tumor (10). Th17 marker genes, IL-17 and RORγt were also suppressed in the tumor. The authors next found that the proportion of Th17 cells in total CD4+ cells was decreased in the small intestine and peripheral blood but not in the spleen, liver and mesenteric lymph node. They considered that the probiotics inhibited the recruitment of Th17 cells from the gut and peripheral blood to the tumor sites, which led to the lowering of pro-angiogenic IL-17 and eventually the suppression of angiogenesis and tumor growth. They confirmed that that additional administration of anti-IL-17 suppressed the tumor growth more strongly compared with probiotics and speculate that the probiotics may require IL-17 modulation for tumor suppression (10). 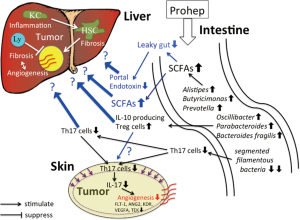 Figure 1 The mechanism of Prohep tumor suppression. Prohep is a novel probiotic mixture adopted by Li et al. The authors considered that the suppressed tumor angiogenesis due to decreased IL-17 and its major producer Th17 cells invoked by the administration of Prohep was the mainstay of this tumor suppression. Decreased levels of pro-angiogenic IL-17, suppressed Th17 cells and the down-regulation of angiogenic growth factors and receptors, FLT-1, ANG2, KDR, VEGFA, and TE were noted together with the decreased vascular area in the subcutaneous hepatocellular carcinoma. Prohep suppressed the growth of SFB, the major inducers of intestinal Th17 cells. Decreased Th17 cells in the small intestine and peripheral blood suggested the decreased mobilization of Th17 cells to the tumor site. In addition, Prohep increased various gut bacteria which produce SCFAs or enhance IL-10 producing Treg cells. Although the authors did not evaluate, SCFAs alleviate leaky gut and portal endotoxemia, which may mitigate liver inflammation and fibrosis, important pro-carcinogenic factors, in an orthotopic hepatocarcinogenesis model. The effects of SCFAs and Treg on the liver and liver tumor are also interesting. Its effect on angiogenesis and carcinogenesis should be further evaluated in relation to other key mediators and various constituent cells in the liver. The results and speculation by the authors are depicted in black, while my speculation and questions are depicted in blue. KC, Kupffer cell; HSC, hepatic stellate cell; Ly, lymphocyte.

It has been reported that segmented filamentous bacteria (SFB) is the major inducers of intestinal Th17 cells, where adhesion of these microbes to intestinal epithelial cells is a critical cue for Th17 accumulation (12). Li et al. (10) noticed that SFB decreased dramatically in the stool of mice given the probiotics. Their metagenomic analysis of stools further revealed that the probiotics increased the abundance of many beneficial anti-inflammatory bacteria. Among them, Alistipes, Butyricimonas, and Prevotella are producers of short-chain fatty acids (SCFAs) in the gut (10). This result is concordant with the drastically increased metabolic potential to produce SCFAs in the analysis of biological metabolic pathways (10). SCFAs, especially butyrate, are important energy source for enterocytes maintaining normal colonocyte turnover, and influence the intestinal barrier function through the preservation of tight junctions and mucous production. Oscillibacter, Parabacteroides, and Bacteroides fragilis, which were also increased in the Prohep groups, are known to enhance IL-10 producing Treg cells (10). Increased bacterial production of SCFAs by the probiotics is considered to alleviate leaky gut and portal endotoxemia, which may mitigate liver inflammation and fibrosis. On the other side, SCFAs is known to increase expression of the Treg-specific transcription factor gene, Foxp3, thereby boosting Treg functions (13). Li et al. did not discuss the meaning of these adjunctive microbial effects induced by their probiotics.

High tumor-infiltrating Tregs are considered to be an unfavorable prognostic indicator of HCC contributing to the immunosuppressive microenvironment (14). The effects of these Treg-stimulating microbiota should be carefully evaluated again in an orthotopic hepatocarcinogenesis model.

Transient survival benefits and serious adverse effects have precluded the wide use of anti-angiogenic drug sorafenib for patients with HCC. Among other anti-angiogenic agents with less side effects, blockers of the renin-angiotensin system such as angiotensin-I converting enzyme inhibitor and angiotensin-II type 1 blocker have been proved to be promising adjunctive to HCC therapy showing synergistic effects in inhibiting hepatocarcinogenesis (15). Like other two probiotics (8,9), Prohep is now expected to suppress the tumor growth in an orthotopic model. Our concern is not only its effect on angiogenesis and carcinogenesis but also its interactions with other key mediators and various constituent cells in the liver. We are also interested in its effects on endotoxin, PAMPs-induced inflammatory reaction and BA metabolism in addition to Th17 cells in the processes of fibrogenesis, angiogenesis and carcinogenesis in the liver.

In this interesting study, we can further know the marked pharmacological differences between the probiotics and the anticancer drug cisplatin. Although local angiogenesis, tumor growth and Th17 cells were suppressed in both treatment groups, the characteristic microbial changes and IL-17 suppression were not observed in the cisplatin group. The authors explained that the suppression of Th17 cells might be attributable to the down-regulation of TGF-β and RORγt, both of which are important for the differentiation of Th17 (10). However, the suppressions of angiogenesis and tumor growth need another explanation unrelated to IL-17 in this group. Anyway, we should bear in mind that chemotherapy itself alters the composition of microbial communities in patients (5). Moreover, another platinum chemotherapeutic oxaliplatin is known to exerts its tumor-retardation effects in a microbiota-dependent manner (5). It seems, therefore, worth investigating if the effects of cisplatin or other anticancer drugs can be substantially heightened by an addition of the probiotics in the cancer chemotherapy.

In this manuscript (10), Li et al. clearly showed the beneficial effect of their new probiotic complex on s.c HCC and explained its mechanism by an attractive thesis focusing on the Th17 cells and angiogenesis. The fact that the administration of probiotics starting from 1 week in advance showed greater antitumor effect suggests that the probiotics may be applicable as a tool of chemoprevention. If its effect is further proved for other cancer cells in this model, it may be applied in the prevention and treatment of other cancers in extraintestinal sites. Although the role of probiotics in the cancer therapy still remains adjunctive at present, evidence is emerging that microbiota can be manipulated for improving cancer treatment (5). Gut microbiome has substantial impacts on cancer chemotherapy, immunotherapy and radiotherapy. Even the efficacy of cutting-edge checkpoint inhibitors appears to depend on the patient’s gut microbiome (5). The direction indicated by this manuscript and other recent studies on gut microbiome may open a new horizon in cancer therapy.