The liver has a 3-dimensinal complex anatomy and a lot of vessels, which accompany inherent risk of major bleeding during operation. Even though laparoscopic liver resection has been more frequently performed, laparoscopic major hepatectomy still seems to be difficult for many surgeons due to the inherent limitations of laparoscopic techniques such as fulcrum effect and the limited degrees of instruments. The robotic systems have recently been introduced to improve a surgeon’s ability in operative field through intuitive hand-control movements, instruments with 7 degrees of freedom, magnified three-dimensional view and stable retraction of a robotic arm (1).

The robotic system was first introduced in Korea in 2005 and since then a total of 58 da Vinci systems have been installed in Korea (2). The first robotic surgery was performed in July 2005, which was cholecystectomy, and robotic surgery has been gradually increasing in Korea (Figure 1). General robotic surgery has a higher proportion of all robotic procedures, unlike western countries. Robotic liver resection is one of the complex procedures among robotic general surgery. In this article, we introduce and describe the experience and development of robotic liver resection in Korea. 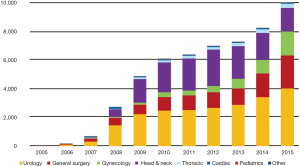 In 2012, we published the techniques and perioperative outcomes of 30 patients (4). Among 30 patients, 20 patients received major hemi- hepatectomy, including 6 right hepatectomies and 14 left hepatectomies, Twenty-one patients had malignant tumors, including 13 HCCs, 3 intrahepatic cholangiocarcinomas and 5 liver metastases. Two patients (6.7%) were converted to open surgery. Overall complication rate was 43.3%, however, the rate of Grade III complications was 20%. More importantly, liver resection -related complications occurred in only two patients who received percutaneous and endoscopic intervention, respectively due to biliary complication. Our initial experiences demonstrated that robotic hemi-hepatectomy as well as minor liver resection is a feasible and safe procedure.

Initial traction method was similar to the technique by Giulianotti et al. (5). Stay stitches at the left resection margin are applied and the left liver is laterally tracked using the 3rd robotic arm. Even though the first two hepatectomies had been successfully done by using this traction method, the third case of left hepatectomy was converted to mini-laparotomy due to bleeding during parenchymal transection. Bleeding may be an inevitable event during parenchymal transection. The bottom line is not only about how to decrease significant bleeding but also how to manage such bleeding. From experience in open major hepatectomy, we have recognized that stable and effective exposure of parenchymal transection plane is one of the keys to safe liver resection. As described in our previous report (6), superficial and deep parenchymal transection planes are fully exposed using rubber bands and additional traction device. If significant bleeding occurs, the operator’s two free hands can effectively manage significant bleeding. This technique has been applied into robotic liver resection from the fourth case of robotic hepatectomy (4). The detailed procedures of the rubber band suspension method are described in Figure 2. 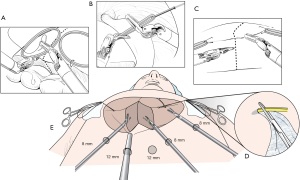 Figure 3 The direction of the tip of Harmonic scalpel is identical to the parenchymal transection plane for hemi-hepatectomy when it is mounted on the second arm (the left hand).

Maryland bipolar forceps is effective in not only controlling minor bleeding from the cut surface but also dissecting and isolating the major vessels in the deep parenchyma due to Endowrist function. It can be also used for parenchymal transection, like Kelly-cramp crushing technique in open surgery. In anatomic liver resection, the parenchymal transection is usually performed by following the ischemic demarcation line, which is formed after inflow control. Because there is no major crossing portal pedicle in the ischemic demarcation line, the Harmonic curved shears can quickly and effectively transect the superficial liver parenchyma. In the deep portion, however, parenchymal transection is finely guided by Maryland bipolar forceps.

We reported our initial experience on right side anatomic liver resection in 10 consecutive procedures, including central bisectionectomy (n=1), extended right hepatectomy (n=1), extended right posterior sectionectomy (n=2), right posterior sectionectomy (n=3), segmentectomy 6 (n=1) and segmentectomy (S4b and ventral segment of S5) (n=2) in 2016 (7). All patients had HCC and received R0 resection. There is no requirement for transfusion during perioperative period. In one patient, there was an unexpected severe adhesion between the tumor and the diaphragm, which resulted in open conversion. Overall complication rate was 70%, but most complications were grade I. One patient experienced a biliary stricture after extended right hepatectomy and received endoscopic intervention.

In this report, the selective glissonean pedicle was fully identified and encircled with vessel loops before parenchymal transection in all patients. However, this procedure took a long time and sometimes significant bleeding occurred from small portal pedicles in a patient with significant portal hypertension. Recently, we have not tried to isolate the portal pedicle completely. The selective portal pedicle was partially exposed and the bulldog clamp was applied (Figure 4A,B). The ischemic demarcation line was clearly identified on the liver surface (Figure 4C). During the parenchymal transection, the right anterior portal pedicle was fully exposed and divided using a linear stapler (Figure 4D). 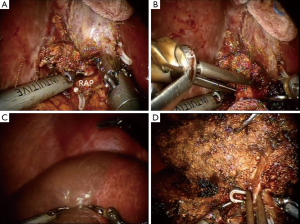 From Dec 2008 to May 2016, 69 patients underwent robotic liver resection using the da Vinci Surgical System® (Intuitive Surgical, Sunnyvale, CA, USA) in Yonsei University Health System, Seoul, Korea. The clinicopathologic characteristics are summarized in Table 1. The mean age was 53 years (range, 18–89 years) and 44 patients (63.8%) were male. There were 53 malignant tumors (36 HCCs, 5 cholangiocellular carcinomas, and 12 liver metastases from gastrointestinal tract), 7 intrahepatic stones, 2 mucinous cystic neoplasms and 5 benign tumors. From the caudate lobe (S1) to segment 8, almost all types of liver resections have been performed, including 54 major hepatectomies (Table 2). The median operation times of major and minor hepatectomy were 518 minutes and 360 minutes, respectively. Operative time seems a little long in our series. However, when the operative time was analyzed in 19 consecutive patients who received left hepatectomy alone, it became stabilized around 5 hours after the 10th case (Figure 5). The median estimated blood loss was 200 and 100 mL in major and minor hepatectomy, respectively. Six patients (8.7%) received perioperative transfusion. There were six conversions to open surgery (9.1%). The reasons for conversion were bleeding (n=1), technical difficulty in dissection of the liver hilum (n=1), tumor adhesions to the diaphragm (n=1), poor exposure and long operation time (n=2) and injury to the left bile duct during living donor right hepatectomy (n=1). Because open conversion was usually done in the late stage, the operation was completed just through the midline mini-laparotomy. The postoperative complication was assessed according to the Clavien-Dindo classification (8). The overall complication rate was 43.5%, but grade III complications occurred in only seven patients (10.6%). The median length of stay in the hospital was 8 (range, 5–46) days (Table 3). 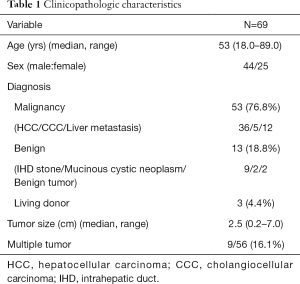 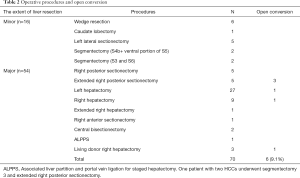 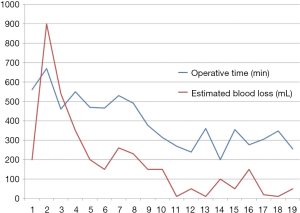 da Vinci Si and Xi system provide Indocyanine green (ICG) fluorescent image. This firefly technique is very useful to identify the biliary structure (11). Recently, we applied this technique into anatomic liver resection. The ICG dye was slowly and directly injected into the left portal vein (Figure 6A). The left liver parenchyma was immediately stained and the demarcation line, especially between S8 and S4a was clearly identified (Figure 6B,C). During parenchymal transection, this image can also keep the proper transection plane and help us remove the liver parenchyma completely from the target liver (Figure 6D,E,F). Other utilities of ICG image such as detecting occult malignant lesions or to assessing bile leakage during robotic liver resection need further investigation. 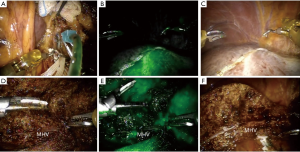 Figure 6 Indocyanine green (ICG) image-guided parenchymal transection. ICG was directly injected into the left portal vein (A). The border between segment 4a and segment 8 was more clearly identified under ICG image (B) than gross vision (C). During parenchymal transection, ICG image enabled us to properly follow the proper transection plane (D and E). The left liver parenchyma was completely removed (F).

Experience in other centers

A recent report from the second international consensus conference held in Morioka pointed out that the range of instruments available for robotic liver surgery is less than for laparoscopic or open techniques (14). The main limitation seems to be for parenchymal transection, for which robotic Harmonic scalpel and Maryland bipolar forceps are available under the current systems. Harmonic Scalpel still has the potential risk for partial injury of large vessels in the deep liver parenchyma and also has a limited effect on controlling bleeding from the moderate sized portal pedicle and healing the bile duct. In our series, two patients were converted to mini-laparotomy during extended right posterior sectionectomy. We think that CUSA is the most effective instrument for parenchymal transection. When robotic CUSA is developed, we will have an additional strong equipment for delicate parenchymal transection, especially for non-anatomic wide liver resection. Another limitation is that Harmonic scalpel is difficult to track various parenchymal transection planes because it does not have Endowrist function. More urgently, Harmonic scalpel needs to have Endowrist function. Recently, new Endowrist Vessel Sealer has been introduced, though its usefulness for parenchymal transection should be investigated further, it seems to have limitation in effective transect liver parenchyma due to the bulky head.

The other disadvantage is the limited vision and access to the posterior side of the right liver. Even though the feasibility and safety of the resection of posterosuperior segment was demonstrated under the left lateral position by Casciola et al. (15), the limitation might develop during right hepatectomy or sectionectomy. If there are severe adhesion to or tumor invasion of the diaphragm, it is very difficult to dissect the right liver from the diaphragm because the robotic systems provide rigid forms of telescope and the shaft of instruments. To overcome these limitations, flexible telescope and more flexible instruments should be developed.

Robotic technology and new robotic instruments have continuously evolved. Even though robotic systems still have the limitations of available instruments for liver resection, new technologies such as ICG-fluorescent image (11) and augmented reality of a surgical procedure (16) are transforming the surgical console from the simple instrument controller to the information systems. Through these technical developments, robotic surgery is expected to gain more popularity in the field of minimally invasive liver resection.

The authors would like to thank to Dong-Su Jang (Medical Illustrator, Medical Research Support Section, Yonsei University College of Medicine, Seoul, Korea) for his help with the figures.