Laparoscopic Pringle maneuver: how we do it?

Laparoscopic liver resection (LLR) is technically possible with new instruments that allow a relatively bloodless liver parenchymal transection. Despite novel tools developed for parenchymal transection, the main concern remains intraoperative hemorrhage (1). Actually, intraoperative excessive blood loss during LLR is often difficult to control and is one of the primary reasons for conversion to laparotomy (2). In addition, major blood loss requires transfusion and increases postoperative morbidity and mortality. When limiting the in-flow by occluding vascular pedicle we can severely reduce intraoperative blood loss. The Pringle maneuver (3), first described in 1908, is the simplest method of inflow occlusion and currently can be achieved during LLR. The purpose of this note was to describe two different modalities of Pringle maneuver during LLR used by two different teams.

This method is used routinely by the Reims team and is similar to the one described by Rotellar et al. (4) in 2012 with some peculiarities. Once the pneumoperitoneum is established the hepatoduodenal ligament is exposed and the pars flaccida of the gastrohepatic ligament is opened using a system of ultrasound energy (ultracision). A 5-mm port trocar is placed along the axillary line in the right flank (Figure 1A). It is important that the trocar should be positioned this way because it must be perfectly perpendicular to the hepatoduodenal ligament; so, a grasper goes behind the hepatic pedicle through the foramen of Winslow and a cotton tape is placed (Figure 1B,C). Then, the ends of the cotton tape are pulled out through the 5-mm port trocar with the help of the grasper. The 5-mm trocar is removed and the end of the cotton tape goes through a 20-F rubber tourniquet that is pushed inside the abdominal cavity up to the level of the hepatic pedicle, while the external end of the cotton tape remains outside of the patient (Figure 1D). For a lesion located in the right liver there are two options: (I) for an anterior lesion (5, 6 anterior, or segment 4b in the left liver) or in case of right hepatectomy the technique differs in the way that a 5-mm trocar is placed in the left flank, and with the help of a second grasp when the cotton tape goes round the hepatic pedicle, the end of the cotton tape is brought out to the left; (II) for a lateral lesion (5,6), we adopt a left lateral decubitus approach. In this case we put out the cotton tape in the right periumbilical region. The Pringle maneuver is done under direct vision in an extracorporeal manner using a Mayo clamp to tighten the tourniquet around the hepatoduodenal ligament (Figures 1E,2). 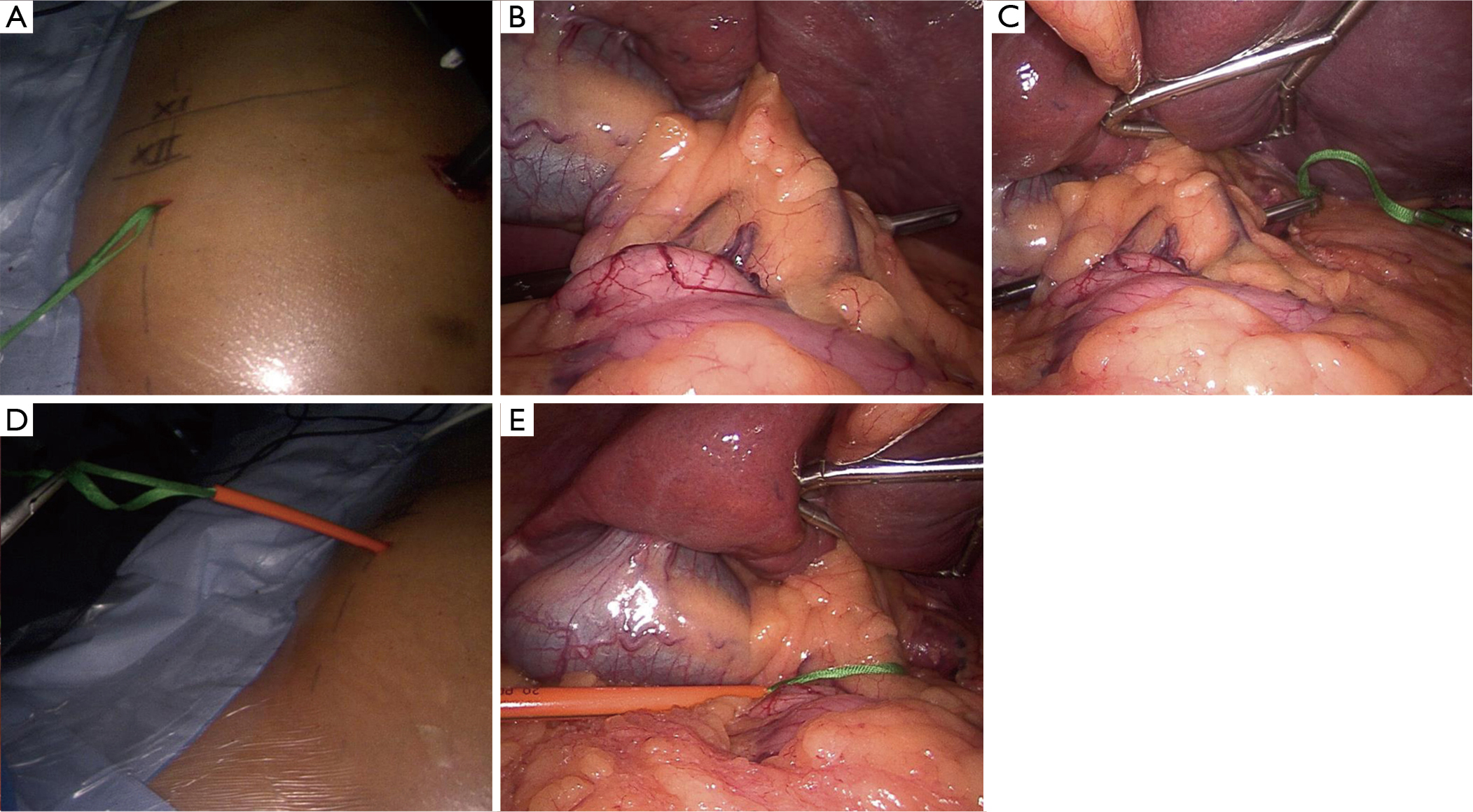 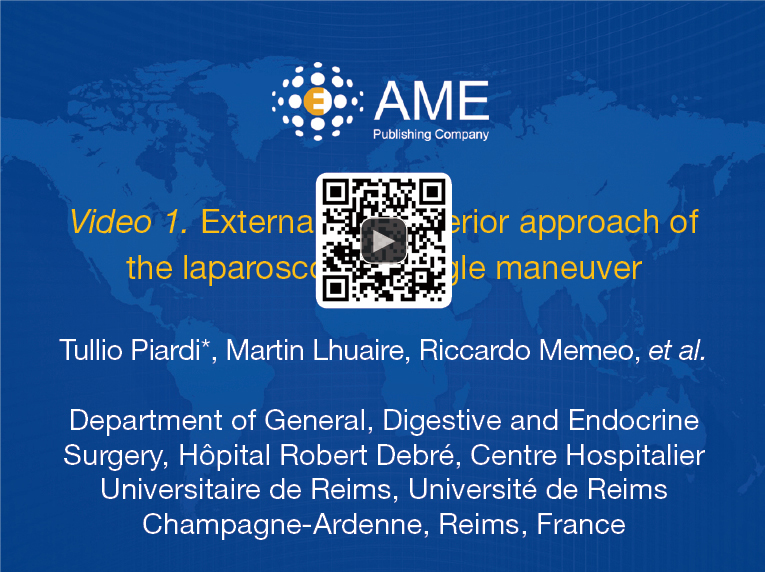 This method is used routinely by the Strasbourg team and is similar to the one described by Cherqui et al. (8) in 2009 with some peculiarities. In fact, even in this method, as we have previously described, a 5 mm trocar is positioned along the left axillary line. So a grasper goes behind the hepatic pedicle through the foramen of Winslow and a cotton tape is placed (Figure 3A,B). The ends of the cotton tape are put out of the trocar (10 mm) located on the left of the optic trocar and passed in a 12 F rubber tourniquet long 5 cm (Figure 3C). This tourniquet is pushed into the cavity and a clip is placed at the ends of the cotton tape (Figure 3D). The Pringle maneuver is done under direct vision in an intracorporeal manner: through the left 10 mm trocar is gripped the tail of the cotton tape while simultaneously through the trocar to the right of the umbilicus a emolock is pushed to tighten the tourniquet around the hepatic pedicle. The parenchymal reperfusion is achieved by the emolock section using a system of ultrasound energy (ultracision) (Figures 2,3E). In contrast to the extracorporeal method, this technique does not change according to the location of the lesion. 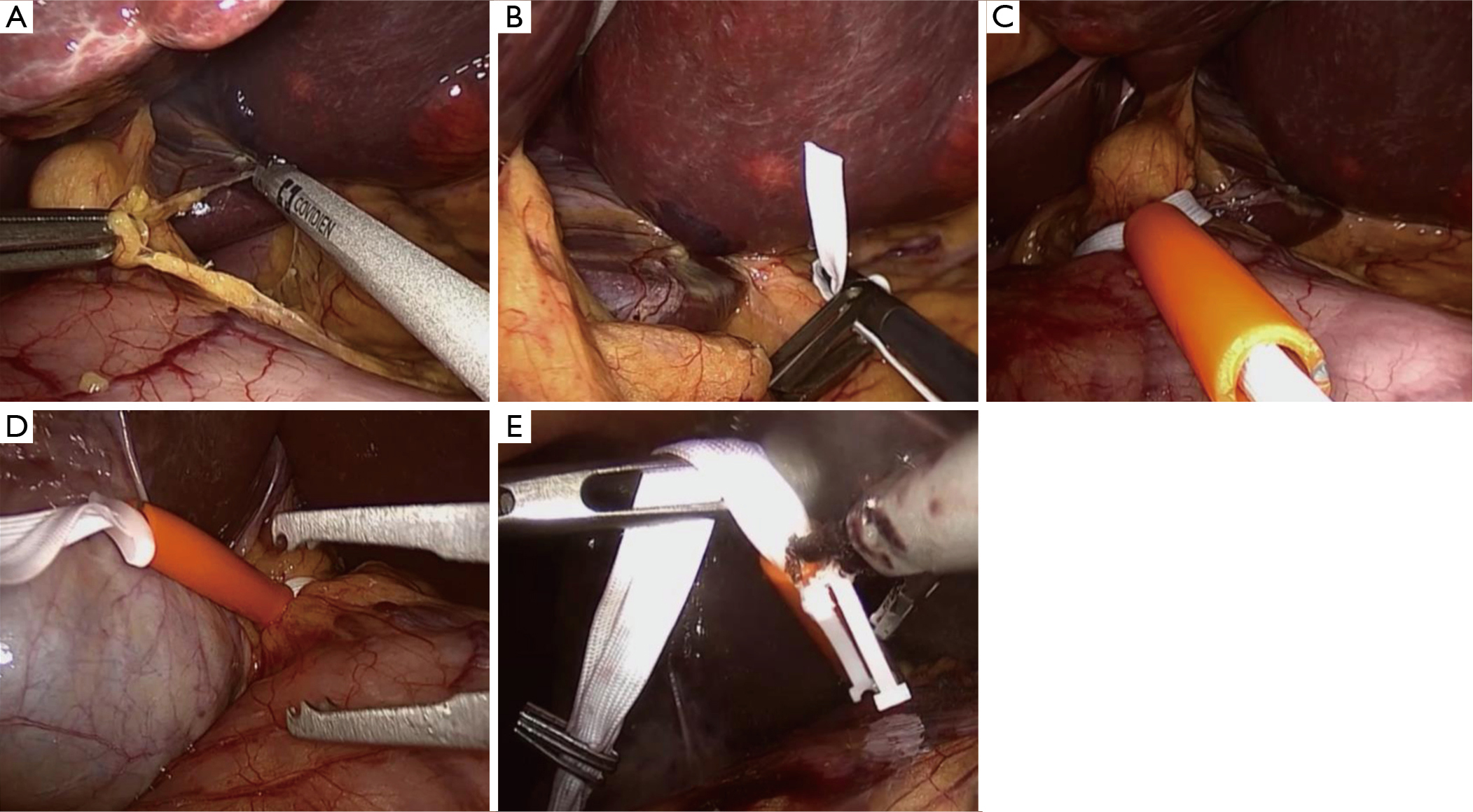 Figure 3 Pringle maneuver: anterior approach. (A) Small epiploon opening; (B) forceps are inserted parallel to hepatic pedicle. Cord is inserted parallel through anterior to posterior movement; (C) cord is exited through the anterior trocart, and a tube is placed in order to do the internal clampage; (D) the hepatic pedicle is surrounding and could be clamped easily at any moment by pulling the cord through the tube and putting an emolock; (E) declamping the hepatic pedicule using ultracision device to remove the emolock.

The Pringle maneuver is feasible during LLR. In this technical note we described in a comprehensive way two different methods of approach to the hepatoduodenal ligament that appears easy and reproducible (Table 1). Adequate Pringle maneuver may be achieve via extra or intracorporeal, and the positive and negative factors can be evaluated by the surgeon based on experience and type of resection. The main criticism that can be done about the intracorporeal technique is that it can be difficult to correctly position the emolock to have a complete occlusion of the vascular pedicle. Furthermore, there can be, in the case of intermittent clamping, an increase of the time of ischemia to the difficulty of the remove emolock with ultracision. In contrast, the extracorporeal method criticism is underlined by the fact that to have a correct view on the liver the output cotton tape should vary according to the lesion site.

Nevertheless, we believe that there is a critical point related the laparoscopic Pringle maneuver: to pass through the narrow space between the hepatoduodenal ligament and the inferior vena cava. The grasp must cross horizontally the hepatic pedicle and this is possible only with a 5-mm port trocar placed along the axillary line in the right flank as also described by Rotellar et al. Even in obese patients or with a severe adhesion due to a previous operation, this technique can be applied with minimal adhesiolysis using 30° camera scope and forceps. In fact, while with 30° optics we can see the right margin of the ligament with the 5-mm trocar in the right flank, we are able to open a sufficient space to pass a cotton tape. This maneuver can be laborious when we use the tocar placed at the right of the midline. Dua et al. in extracorporeal Pringle maneuver used to place an umbilical tape around the hepatoduodenal ligament, a 5-mm laparoscopic articulating 90° esophageal dissector localized at the right or left side of the midline. This type of dissector is necessary because the surgeon operates with a tool practically parallel to the hepatoduodenal ligament.

In literature, different modalities of vascular occlusion to decrease blood loss during LLR have been reported. A literature search for phrases like “Pringle maneuver”, “inflow occlusion” and “liver laparoscopic resection” was performed in PubMed from cited English publications. Six articles were reviewed and all studies were unicentric: 3 originated from Asia, 2 from Europe and 1 from America. All publications were retrospective analyses: 2 compared Pringle vs. no Pringle or tourniquet method and only one reported experience in HCC. Whilst in the case of extracorporeal technique we know the difference of execution, in situations of hemorrhage clamping is easy and effective. Regarding the intracorporeal technique we appreciated the important difference in execution. The experience of Foshan’s hospital (9,10) describes two different methods: the “six-loop” and the other “the lowering of hilar plate approach”. Both methods appear difficult to elaborate and to perform. In the case of the “six-loop” a 1-0 vicryl was used to fix the nelaton tube onto the other end or the cross head of T-tube during the clamp period to prevent loosening of the six-loop. In this way, it is difficult to duplicate the method; the author experience reported average Pringle maneuver is 36.2 min that is maximum 2 times. In the case of lowering hilar plate approach, it could be highlighted the difficulty to dissect the hilar plate region and to lower the plate and on the other, the risk of a lesion of the bile ducts.

In conclusion, despite novel devices to do hepatic transection limiting the perioperative blood loss, the Pringle maneuver is feasible and easy to do to ensure safety and prevent major accidental blood loss. In addition, we think that is should be employed especially in case of minor hepatectomy where the axe of transection plane is not under direct vision plan, underlying a higher risk of bleeding not easily accessible to direct usual hemostasis.

Informed Consent: Written informed consent was obtained from the patient for publication of this article and any accompanying images. A copy of the written consent is available for review by the editor-in-chief of this journal.