The success of using a partial graft for liver transplantation depends highly on portal venous flow as it is the primary determinant of graft regeneration. Portosystemic collaterals (PSCs) are not uncommon, with an incidence reported to be as high as 40% amongst liver transplant candidates (1). These shunts have been implicated in portal flow steal, a phenomenon known to result in graft hypoperfusion, dysfunction and in some cases, graft failure. In light of this, several authors have recommended routine ligation of significant PSCs during living donor liver transplantation (LDLT) in order to avoid portal flow steal syndrome (2-4). On the other hand, when single stage ligation of PSCs is performed during primary LDLT in patients receiving small-for-size grafts, the recipient will be at risk of developing early graft dysfunction and/or small-for-size syndrome as a result of portal hyperperfusion. We propose a novel strategy for small-for-size grafts where we intentionally leave large PSCs open during primary LDLT to avoid small-for-size syndrome, followed by staged ligation of large PSCs to prevent portal flow steal syndrome after sufficient graft regeneration.

A 53-year-old Malaysian lady with primary biliary cirrhosis and repeated variceal bleeding was referred for pre-transplant evaluation. The patient had hyperbilirubinemia, hypoalbuminemia, coagulopathy and pancytopenia (MELD:15, CTP:10, UNOS:2B). Her CT-angiogram showed liver cirrhosis, splenomegaly, portal vein (PV) thrombosis (Yerdel grade 1) and two large PSCs—the coronary vein, 10.9 mm, and a gastrorenal shunt, 11.6 mm (Figure 1A,B). The donor, who was the patient’s husband, was ABO-compatible, with a marginal left lobe graft volume to recipient standard liver volume (SLV) ratio of 35% by CT volumetry estimate. The patient subsequently underwent LDLT with the left lobe graft that included the caudate lobe and the middle hepatic vein. The actual graft was, however, smaller than the CT volumetric estimate, with a weight of only 284 g (31% SLV, GRWR 0.73%). The PV was reconstructed following eversion thromboendovenectomy. After reperfusion, the portal pressure gradient was only 7 mmHg (portal venous pressure 15 mmHg minus central venous pressure 8 mmHg), while PV velocity and portal flow volume by Doppler ultrasound were 43.8 cm/sec and 602 mL/min (202 mL/100 g/min) respectively. 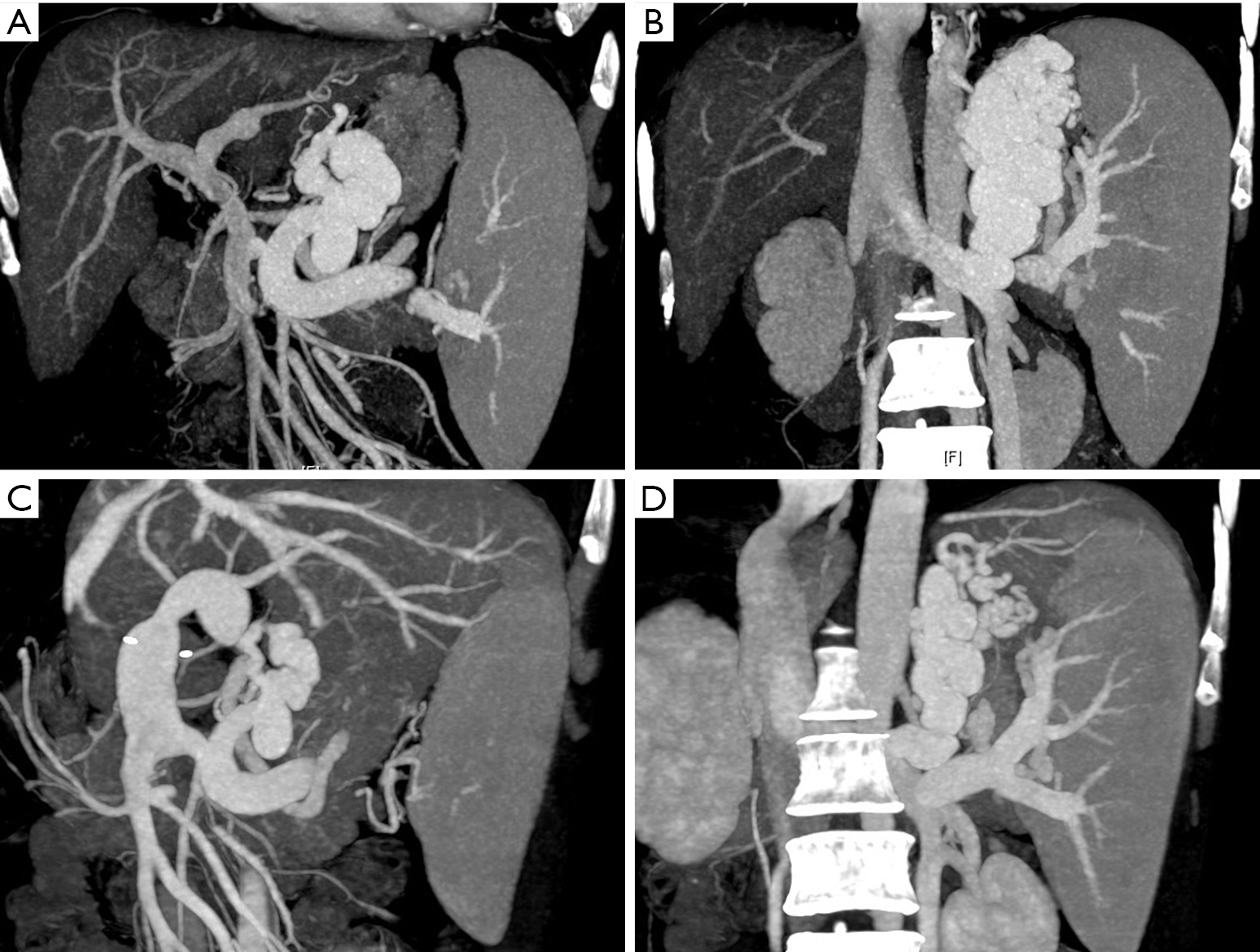 In order to avoid early graft dysfunction and/or small-for-size syndrome, the large PSCs were intentionally left patent, with a plan for subsequent staged ligation to prevent future portal flow steal syndrome. This was likewise particularly decided for the patient as she was from overseas and close follow-up with frequent Doppler ultrasound and/or CT imaging was logistically not feasible.

The recipient’s post-transplant course was unremarkable and surveillance CT angiogram at one month after LDLT showed adequate regeneration to more than double the original graft volume (634 mL) with notable optimal vascularity. The PSCs at that time were still prominent, with measurement of 8.2 mm for the coronary vein and 11 mm for the gastrorenal shunt (Figure 1C,D). The patient subsequently underwent the planned open surgical ligation of the PSCs with intra-operative cine-portogram guidance and portal pressure monitoring. Although test clamping of the PSCs increased the portal pressure gradient from 11 to 16 mmHg, we still proceeded with ligation of PSCs as the regenerated graft was by then already deemed adequate to tolerate a hyperdynamic portal flow state. The recipient recovered well and was able to return to Malaysia with perfect liver function.

In liver transplant recipients with large PSCs, Ikegami et al. suggested shunt ligation to prevent portal flow steal, and synchronous splenectomy for PV decompression (4). In the case of this patient with a small-for-size graft, the portal pressure gradient was only 7 mmHg (portal venous pressure 15 mmHg minus central venous pressure 8 mmHg) after reperfusion; PV velocity and portal flow volume by Doppler ultrasound were 43.8 cm/sec and 602 mL/min (202 mL/100 g/min) respectively. With these values, portal inflow modulation was not indicated with either splenic artery ligation or splenectomy. Instead, a decision was made for staged surgical ligation of PSCs in order to allow for initial graft regeneration prior to subsequent PSC ligation to prevent future risk for portal flow steal syndrome. This strategy was particularly appropriate for this patient who was from overseas and whose close follow-up with Doppler ultrasound and/or CT imaging monitoring was untenable.

Portal flow steal is not uncommon in LDLT because partial liver grafts undergo rapid regeneration in order to meet the metabolic demands of the recipient (5). Although the portal flow remained hepatopetal at 1 month after LDLT in this patient, we have adequate knowledge that an increase in intra-hepatic resistance to portal flow and a decrease in graft compliance—such as during rapid graft regeneration, or conditions including graft rejection, dysfunction, and cholangitis—predisposes already shrunken PSCs to re-open. Consequentially, there would be a reduction in portal perfusion that may potentially lead to a pathophysiologic portal flow steal and subsequent secondary graft damage, that may occur acutely or over a period of years after LDLT. The staged operation was therefore intended to prevent delayed portal flow steal syndrome, particularly for this and similar other patients who will be foreseen to encounter logistical challenges in the course of their short-interval follow-up.

In our novel strategy for recipients with large PSCs receiving small-for-size grafts, we intentionally leave large PSCs open during primary LDLT to avoid small-for-size syndrome, and follow this up with staged or interval ligation of the remaining identified large PSCs in order to prevent portal flow steal syndrome after sufficient graft regeneration. By using this technique, we are also able to avoid post-splenectomy complications, in particular, splenic and subsequent PV thrombosis in patients with pre-transplant PV thrombosis.

In conclusion, staged-ligation of large PSCs in recipients receiving small-for-size grafts, may be a feasible consideration. This strategy of delaying closure of large PSCs may considerably reduce the risk for both small-for-size syndrome and portal flow steal syndrome; at the same time, outright splenectomy during primary LDLT and its potential risks and complications may be avoided.

Conflicts of Interest: All authors have completed the ICMJE uniform disclosure form (available at http://dx.doi.org/10.21037/hbsn-20-330). CLC serves as an unpaid editorial board member of Hepatobiliary Surgery and Nutrition. The other authors have no conflicts of interest to declare.