Perspectives on immunotherapy utilization for hepatobiliary cancers in the United States

Strategies involving immunotherapy and targeted therapies are emerging in the last years as valuable options for patients with hepatobiliary cancer (HBC) including hepatocellular carcinoma (HCC), gallbladder cancer (GBC), intrahepatic cholangiocarcinoma (ICC), and extrahepatic cholangiocarcinoma (ECC). For a long time, these diseases had only few treatment options and often with considerable toxicities (1,2). Sahara and colleagues reported an analysis of 249,913 patients with HBC identified through the National Cancer Database (NCDB) from January 2004 to December 2015. Their main objective was to assess the utilization of immunotherapy (IO) in the treatment of HBC and examine socioeconomic and disease-related factors associated with the receipt of IO in the United States (US). As a result, the authors found that only a minority of patients received immunotherapy (n=585, 0.2%). Some factors were statistically correlated with a higher chance to receive immunotherapy, including a more recent period of diagnosis (referent 2008–2011: 2012–2015), median income ≥$46,000 (referent <$30,000), diagnosis of HCC, ICC or ECC (referent: GBC), higher tumor stage, and prior receipt of cytotoxic chemotherapy. The authors have highlighted that socioeconomic factors were associated with an increased likelihood of receiving immunotherapy, which may suggest disparities in access or enrollment of patients with lower socioeconomic status (3).

Different IO therapies in biliary tract cancer (BTC) are currently under evaluation in prospective trials (4,5). In KEYNOTE-028 (KN028) and KEYNOTE-158 (KN158) patients with incurable BTC who progressed on any number of prior standard treatment regimens have received pembrolizumab 200 mg Q3W (KN158) or 10 mg/kg Q2W (KN028) for up to 2 years. No patient had MSI-H tumors and PD-L1-positivity (membranous PD-L1 expression in ≥1% of tumor and associated inflammatory cells or positive staining in stroma) was required for eligibility in KN028, but not in KN158. These studies were started in 2014 and 2015 respectively. In KN158, overall response rate (ORR) was 5.8%, median overall survival (mOS) was 7.4 months, and median progression-free survival (mPFS) was 2.0 months. In KN028, the ORR was 13.0%, the mOS and the mPFS were 6.2 months and 1.8 months, respectively (4). Nivolumab, another anti PD-1 monoclonal antibody, was evaluated in a phase II study started in 2016, in advanced refractory BTC. Patients who progressed on at least one line but no more than three lines of systemic therapy received nivolumab until disease progression or unacceptable toxicity. Of 45 patients, 22% achieved partial response and disease control rate was 60%. After a median follow-up of 13.34 months, the mPFS was 3.98 months and the mOS was 14.22 months (5). Pembrolizumab was evaluated in mismatch repair deficient tumors in two cohorts, including BTC patients (6,7). Objective radiographic responses were noted in 53% of all patients (46 of 86 patients; 95% CI: 42–64%), with 21% (n=18) achieving a complete radiographic response, objective response rate was similar between colorectal cancer versus other cancer subtypes (7). Currently, in the US, the approval for IO in BTC is only for patients who have received standard frontline treatments (chemotherapy) in patients with microsatellite instability-high (MSI-H) tumors.

In HCC, approval of nivolumab and pembrolizumab was based on prospective phase I/II studies, including patients who had received first-line treatment with sorafenib for advanced disease. CheckMate-040 is a prospective trial accessing nivolumab every two weeks in patients with advanced HCC, with or without chronic viral hepatitis. Previous exposure to sorafenib was allowed. Between November 26, 2012, and August 8, 2016, 262 patients were treated. The ORR ranged from 15% to 20%, in dose-escalation and dose-expansion (8). Comparable results were found in Keynote 224, evaluating pembrolizumab 200mg every 3 weeks (9). Between June 22, 2016, and February 20, 2017, 104 enrolled patients were treated with at least one dose of pembrolizumab and were included in the primary analysis. The ORR was 17% and disease control rate was 62%. More recently, in the randomized phase III trial Keynote 240, pembrolizumab was compared with placebo (Pcb) in a group of patients previously exposed to sorafenib. After a median follow-up of 13.8 months, pembrolizumab improved OS (HR: 0.78; one sided P=0.0238) and PFS (HR: 0.78; one sided P=0.0209) versus Pcb. However, these differences were not significant considering the prespecified statistical plan (10). More recently, at ESMO 2019, the results of the randomized phase III trial Checkmate-459 were reported (11). A total of 732 patients with advanced HCC were randomized to receive sorafenib or nivolumab in the first-line setting. With a minimum follow-up of 22.8 months, the mOS was 16.4 months for nivolumab and 14.7 months for sorafenib (HR 0.85; 95% CI: 0.72–1.02; P=0.0752). ORR was 15% for nivolumab and 7% for sorafenib. Grade 3/4 treatment-related adverse events were reported in 81 (22%) patients in the nivolumab arm and 179 (49%) patients in the sorafenib arm. Despite not reaching its prespecified primary endpoint for improved overall survival, the study showed a favorable safety profile with nivolumab compared to sorafenib.

Based on the results of the presented studies and the multivariate analysis of the data from the NCDB by the authors, it is clear that factors identified as being important which include a more recent diagnosis of disease, diagnosis of hepatocellular carcinoma, higher tumor stage, and the presence of previous systemic treatments are related to the characteristics of clinical trials developed and conducted during the analyzed period (2012–2015), which could have influenced off-label use of these drugs during this time (Table 1). For this reason, this analysis might be considered somewhat premature and a follow-up analysis will be important to assess the true rate of IO utilization in the current period. Higher income versus lower income differences could be related to off-label use (which would occur with greater frequency in privately insured patients). Interestingly, race is not a statistical positive factor and the distribution of demographics appears to be consistent with racial demographics of the United States population (12). Another issue to be addressed is the indications of adjuvant and neoadjuvant immunotherapy. In the study, 136 patients received IO and underwent surgery; and about 40–60% did not have AJCC complete staging. There was a trend of IO use in 2004–2005 among patients who underwent surgery, where probably currently clinically relevant drugs (nivolumab and pembrolizumab), were not employed. Data on which drugs defined as IO were used during that period and the complete staging of these patients is needed in order to draw more precise conclusions regarding these indications. The trend in non-surgical patients with an increase in 2012 and peak by 2015 is possibly associated with clinical trials and subsequent drug approvals. Currently, there are no indications of immunotherapy in the adjuvant or neoadjuvant settings for HCC or BTC, outside of clinical trials. There are several ongoing trials addressing immunotherapy in the first-line and perioperative settings (Table 2). If any of these trials achieve positive results, there would likely be an uptrend in the use of immunotherapy given the differentiated safety profiles of immune checkpoint inhibitors to anti-angiogenic kinase inhibitors. The authors developed an interesting analysis to elucidate the applicability issues of immunotherapy and HBC in the U.S. However, in the context of drug approvals in the recent years and likelihood of new indications in the upcoming years, a more up-to-date analysis of their use would be of interest to see if these socioeconomic disparities persist. 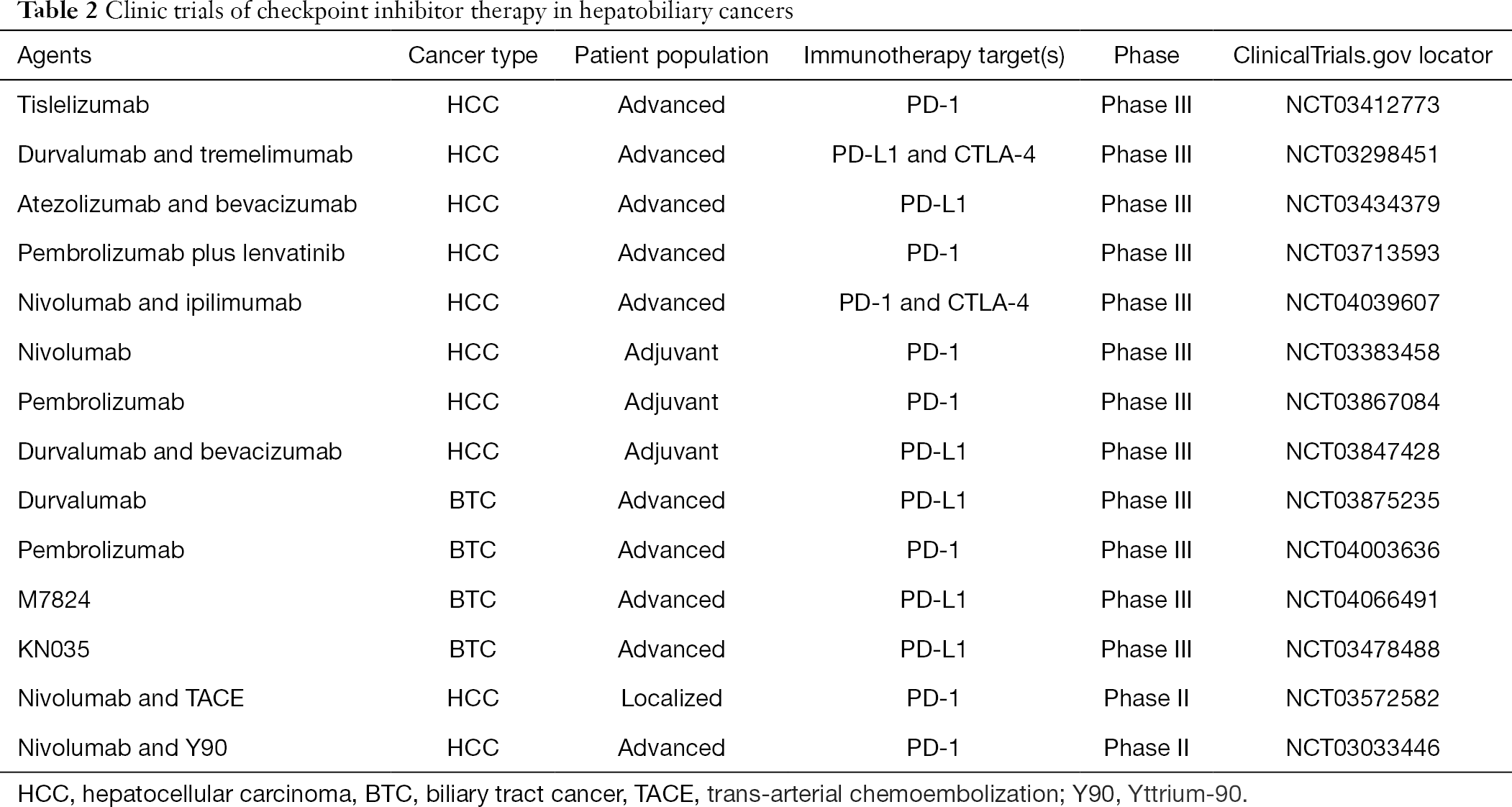