According to last year’s status report on the global burden of cancer, colorectal carcinoma is a rising major medical concern with an estimated rate of over 1.8 million new patients and 881,000 cessations annually, making it the second main cause of cancer-related mortality worldwide (1). Of all colorectal cancer patients, 40–76% will develop colorectal liver metastases (CRLM) in the course of their disease (2-4).

In this month’s edition of HepatoBiliary Surgery and Nutrition Takahashi and Berber present a review that clearly describes the current and expanding role of radiofrequency ablation (RFA) in the management of CRLM patients. The four main indications for thermal ablation are highlighted: (I) for unresectable lesions, (II) in combination therapy with hepatic resection, (III) for an impaired general health status, and (IV) for a small solitary lesion which would otherwise necessitate a major hepatectomy. Partial hepatectomy is considered the first-line therapeutic option for curative intent treatment of CRLM, though unfortunately the majority of patients (80–85%) are not eligible for surgical resection (2,4,5). Global guidelines have already accepted thermal ablation as the gold standard technique to eliminate unresectable CRLM and the expanding toolbox of ablative therapies is rapidly working its way up in the management of patients with small and difficulty resectable tumors.

Thermal ablation compared to partial hepatectomy and to chemotherapy

Two recently issued systematic reviews and one meta-analysis enumerated all available series regarding thermal ablation, systemic chemotherapy and surgical resection in the treatment of CRLM (5,6).

For unresectable disease, the maximum achievable level of evidence seems to have been reached with the recently issued long-term results of the EORTC-CLOCC trial (7). RFA (± surgical resection) plus chemotherapy versus chemotherapy alone showed a remarkable difference in 8-year overall survival of 35.9% vs. 8.9%, respectively. These results irrefutably reveal that aggressive local therapy can considerably prolong overall survival or in a subcategory of patients even provide cure. As a consequence, further randomized comparisons of local ablative therapy to curative intent chemotherapy alone should be considered unethical (5).

Comparing surgical resection alone for resectable disease with RFA for unresectable disease, RFA demonstrated inferior survival rates but significantly fewer complications (5). In these series there is an evident selection bias when comparing patients with unresectable disease (who receive thermal ablation) to those who were eligible for surgical resection to begin with. The combination of RFA and partial hepatectomy resulted in comparable overall survival compared to partial hepatectomy alone for resectable lesions. To clarify, in patients with at least one unresectable CRLM, partial hepatectomy plus RFA offers patients an overall and disease-free survival comparable to that of surgery alone candidates. The more recent retrospective cohorts, published after 2012, after case matching or multivariate analysis, reported comparable survival rates for thermal ablation alone vs. surgery alone (8-12). All observational studies were confounded by indication, because thermal ablation was solely performed for unresectable disease. Although microwave ablation (MWA), presumably being superior to RFA, is being used more frequently as an alternative to RFA over the last years, the available evidence in terms of comparative series was limited (5).

These outcomes and the apparent selection bias from previous studies have revitalized the debate whether ablation, given its less invasive character, should be favored over surgical resection for smaller (≤3 cm) resectable CRLM.

For resectable and ablatable disease, we have designed the COLLISION trial (clinicaltrials.gov NCT03088150) (13). This is an international phase-III prospective randomized trial, initiated by the Amsterdam University Medical Center (location VUmc) in the Netherlands. The trial is embedded within the Dutch Colorectal Cancer Group (DCCG), a multidisciplinary collaboration that tents to improve the quality of diagnosis and treatment of colorectal cancer patients through the initiation of preclinical and clinical scientific research. The trial is partly funded by an investigator sponsored research grant by Medtronic PLC.

The COLLISION trial’s main purpose is to test the hypothesis of non-inferiority of ablation compared to surgical resection in patients with small (≤3 cm) CRLM. Participants should have at least one ablatable and resectable lesion (target lesion) without having extrahepatic disease or having received prior focal liver treatment. Additional resection(s) for resectable lesions (>3 cm) and ablation(s) for unresectable lesions (≤3 cm) are permitted. The main study endpoint is overall survival (OS). Subordinate endpoints are local (tumor) progression-free survival, disease-free survival, primary and assisted technique efficacy, mortality, morbidity, length of hospital stay, assessment of quality of life and cost-effectiveness.

A total of 618 patients will be randomized into study-arm A (surgical resection) or study-arm B (thermal ablation) for appointed target lesions (Figure 1). At present, over 110 patients have been treated according to their randomization arm. If thermal ablation for resectable CRLM proves to be non-inferior (i.e., equal or superior) to partial hepatectomy, a decrease in postoperative morbidity and mortality, length of hospitalization and accumulative costs with superior quality of life can be expected. All without compromising oncological outcomes. The first study results are eagerly awaited and foreseen at the end of 2025. 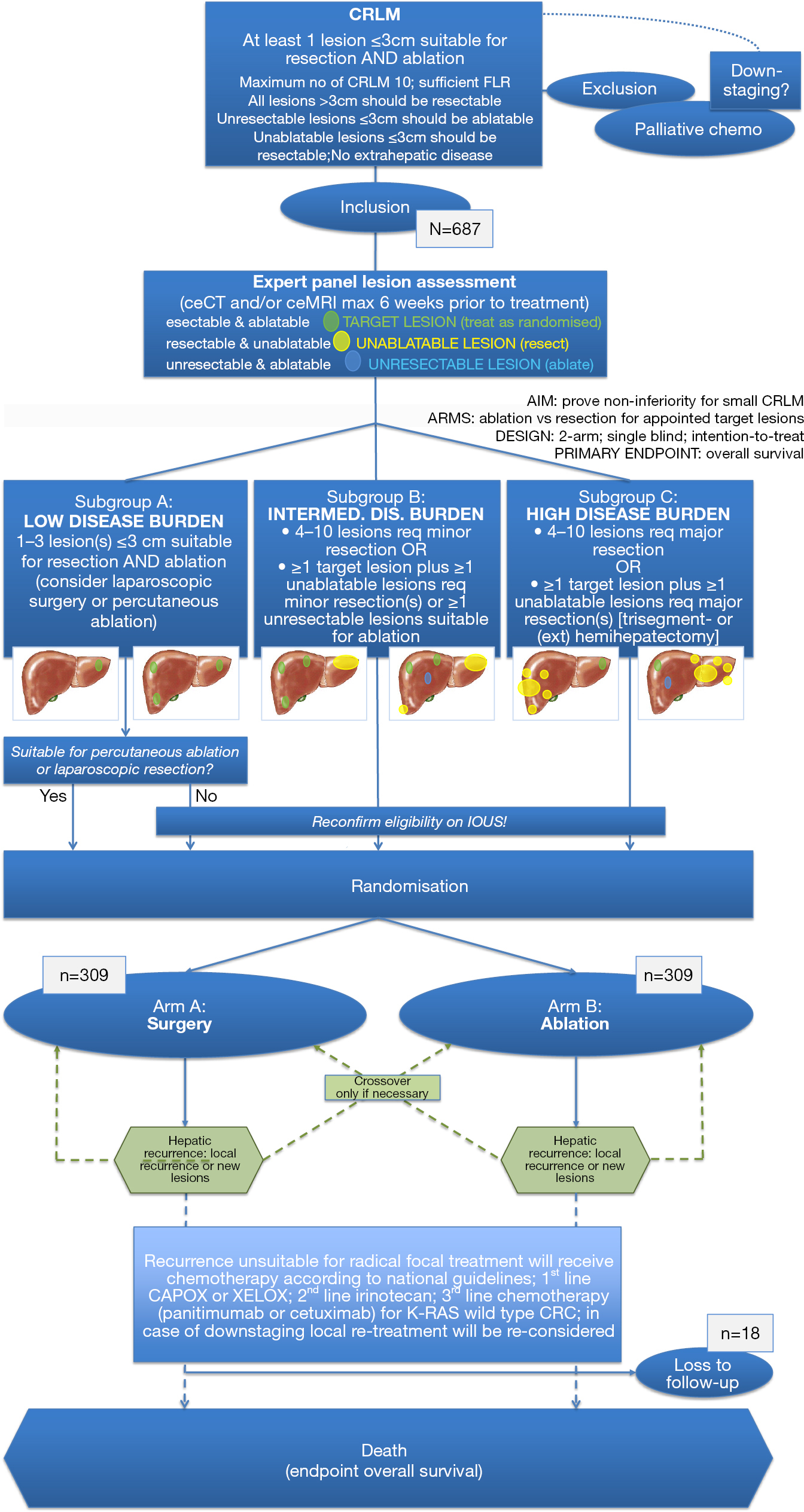 To conclude, the widespread adoption of minimally invasive thermal ablation in the treatment of unresectable hepatic metastases of colorectal cancer is an inevitable development in clinical oncology. Future results of the ongoing COLLISION trial will undoubtedly give us answers on the pressing question whether to perform thermal ablation or resection for small (≤3 cm) resectable CRLM.

Conflicts of Interest: All authors have completed the ICMJE uniform disclosure form (available at http://dx.doi.org/10.21037/hbsn.2019.11.22). Investigator Sponsored Research (ISR) grant by Medtronic PLC. The funders had no role in the design of the study, the collection, analysis or interpretation of the data, the writing of the manuscript, or the decision to submit the manuscript for publication.