Castleman disease (CD), also known as giant lymph node hyperplasia, was first reported by Castleman in 1956 (1). CD is a rare lymphoproliferative disease and the exact etiology remains unclear. However, there have been few reports on retroperitoneal CD due to its peculiar location and low morbidity, and the literatures are mostly limited to case reports (2-7).

Since the first case of CD with paraneoplastic pemphigus (PNP) was definitely diagnosed and cured through multidisciplinary collaboration in 1999 in our hospital, we have received 27 cases of retroperitoneal CD with PNP in our department up to date. In this study we analyzed the clinical data, including clinical manifestations, laboratory tests, biological behaviors, surgical strategies and survival, to summarize the clinical features of retroperitoneal CD, aiming to increase the recognition of retroperitoneal CD, especially in patients with PNP, and improve its diagnosis and treatment.

Data of 45 patients with retroperitoneal CD who were treated in the Department of General Surgery of Peking University First Hospital between September 1993 and March 2017 were collected and retrospectively studied. Diagnoses of CD of all cases were confirmed by pathological examination of preoperative or postoperative lymph node biopsies. PNP was diagnosed by the Department of Dermatology in our hospital based on histological results of cutaneous or mucosal lesion biopsies. After treatments, patients were regularly followed up by phone or through outpatient clinics until June 2018. The Ethics Committee of Peking University First Hospital approved the use of the records of all corresponding patients.

The cases included 22 males and 23 females (1:1.04), with a mean age of 34.3±12.4 years (range: 16–61 years). The patients were divided into two groups depending on whether complicated with PNP, and differences between groups were analyzed (Table 1). 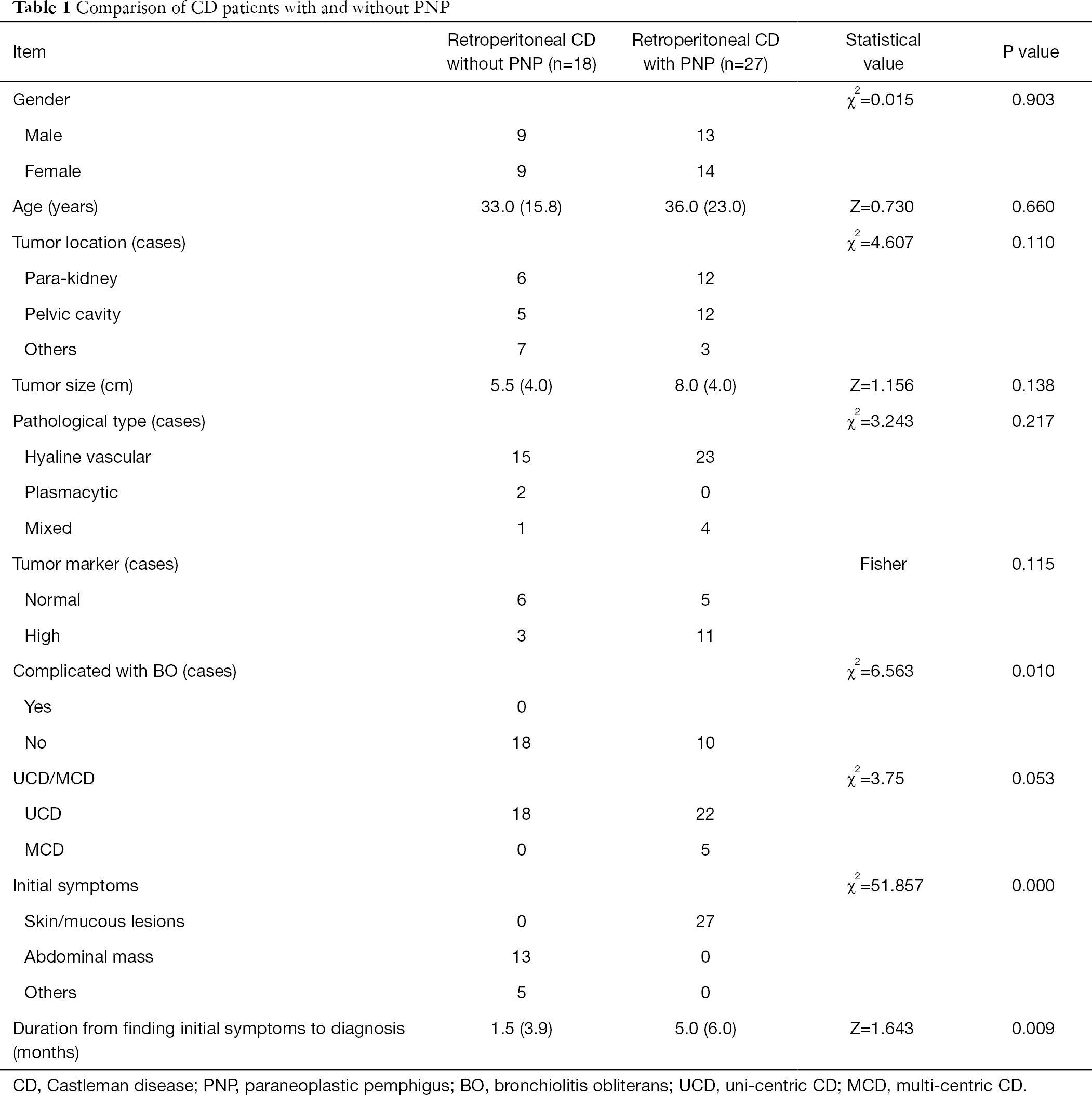 Of the patients with PNP, 10/27 (37.0%) presented with at least one of the following: cough, asthma, pulmonary infection or embolism. Imaging and ventilation function tests showed severe stenosis of the bronchial lumens, seriously impaired ventilatory function of the terminal bronchus and alveoli, and declined respiratory function, patients were finally diagnosed with bronchiolitis obliterans (BO), while no complications from BO emerged among patients without PNP (0 vs. 37.0%, P=0.010).

Abdominal ultrasound and computed tomography (CT) examinations were performed in all patients. The ultrasonic images showed the tumors as round or lobulated and hypoechoic with calcifications that could be partially observed. Color Doppler imaging showed rich local (locally rich) blood flow signals, and the vasa vasorum could be seen at the tumor margin. Characteristics of CT images included round or lobulated masses with a clear boundary and uniformed density and no necrosis, cystic changes or bleeding in the nidus. Radial low-density areas in the nidus or dendritic calcification in the center were found in 10 cases (22.2%). CT images of one the patients were shown in Figure 1.

Figure 1 CT scans showed a mass with an intact peplos located in the right pelvic cavity, and calcification was observed inside the mass. CT, computed tomography.

Surgical resections of the tumors were performed on all the 45 cases. Operations were performed by laparotomy under general anesthesia. Median operation duration was 150.0 min (45–599 min, Q=130.8 min). Locations of the tumors were confirmed by CT to assist accurate incision of tumors in operation. Of the 45 tumors, 43 showed little adhesion to adjacent organs and tissues and were easily removed, while 2 were not resected completely due to their invasive growth into adjacent organs and tissues. One of the 2 patients had received a laparotomy in another hospital before admitting to our hospital and the tumor was failed to remove. During the operation in our hospital, the tumor was confirmed to be located in the right iliac fossa with a maximum diameter of 15.0 cm. The right ureter was expanded because of the tumor’s pressure, and the right external iliac artery was also invaded. The mass was fractured and the fragments were successively resected inside the peplos. There was 1,200 mL intra-operational bleeding as the tumor blood supply was quite rich. The maximum diameter of the other patient’s tumor was 10.0 cm, and it was located in the left iliac fossa at the level of the bifurcation of iliac vessels. The external iliac artery and veins were covered inside, and most of the tumor was finally resected.

Postoperative pathologic sections were reviewed and recorded by pathologists. There were 38 hyaline-vascular variants, 2 plasmacytic variants and 5 mixed variants, and the difference in constituent ratios was not significant between the groups with and without PNP (P=0.217) (Table 1).

Of the 18 cases without PNP, 17 were completely cured, and one patient died of pulmonary infection 15 days after the operation. Of the 27 cases with PNP, 25 were significantly relieved of the cutaneous and mucosal lesions after surgical resection of the tumor, although 3 of these patients died 1 month later and 1 patient relapsed 2 months later. The rest two patients with PNP were not apparently relieved of the cutaneous and mucosal symptoms and kept receiving corticosteroid therapy.

However, among the 25 cases with PNP who were significantly relieved of the cutaneous and mucosal lesions, localized recurrences happened in 2 cases where the tumors were palliatively removed. Mucosal erosions and cutaneous rashes re-emerged 32 months after the resection in 1 of these 2 cases, and CT examination showed a mass with a maximum diameter of 1.5 cm in the left iliac fossa. The pathologic result was reported as “localized recurrence of retroperitoneal CD”, and the patient died of respiratory failure 54 months after the operation. The other patient died during the second operation, 2 months after the initial operation.

All patients were followed up by phone or through outpatient clinics regularly until June 2018. The median follow-up time was 21.0 months (0.5–150.0 months). Four patients were lost to follow-up. One patient with PNP complicated from BO complained about cough and dyspnea, as did another with PNP but without a diagnosis of BO. Two patients with PNP were still suffering from cutaneous and mucosal lesions. One patient without PNP complained of a decline in immunity and increased susceptibility to viral infection. Nine patients died during the follow-up, including the two who relapsed. Clinical data of the 9 patients who died were shown in Table 2. The rest cases were completely cured and remained healthy.

All 9 patients died of disorders of the respiratory system. Although one patient died of septicemia, the infection in the peripheral circulation was actually caused by a long-term respiratory infection. The only one deceased patient without PNP died from a pulmonary infection, which was caused by continuous complications from myasthenia gravis.

Patients with and without PNP had a median survival time of 17.0 months (Q=33 months) and 41.5 months (Q=57.3 months), respectively. All cases without PNP (18/18, 100.0%) were UCDs and 22/27 (81.5%) cases with PNP were UCDs. Kaplan-Meier analysis showed that the 5-year survival rates of the groups with and without PNP were 64.2% and 94.0%, respectively. All Log-rank method was used to compare the differences in survival rates between the groups based on complications with PNP, gender, and age. Differences are significant in survival between the 3 pairs based on BO, gender and age (Figure 2), while the differences between groups based on complication with PNP and UCD/MCD were not significant (P=0.062, 0.181). 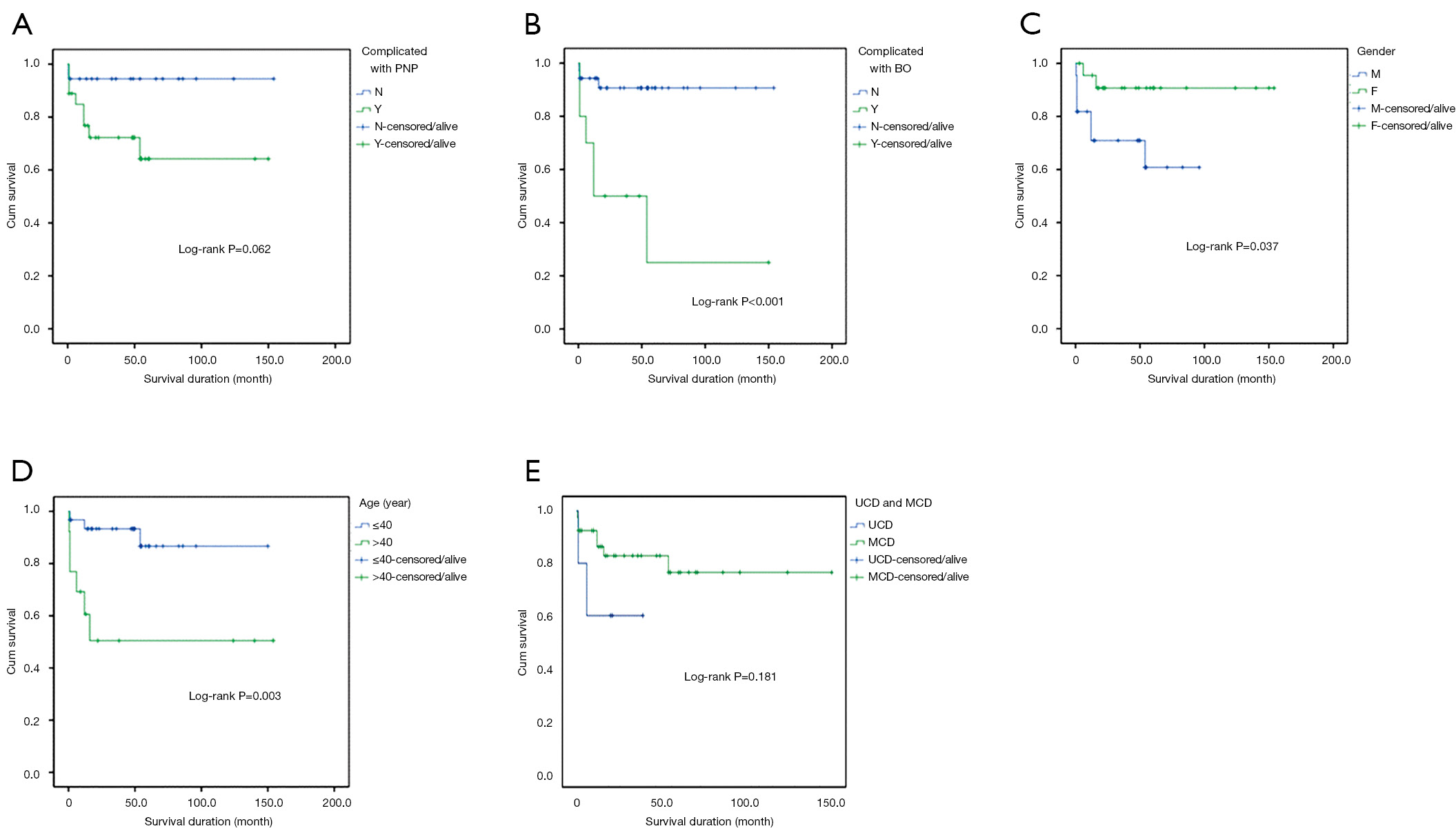 Generally, multicentric Castleman disease (MCD) has been reported more often than unicentric Castleman disease (UCD) because the former has a more symptomatic presentation related to a series of disciplines, including hematology, nephrology, neurology, and dermatology, and shows a much worse prognosis than UCD (8-10). Survival analysis showed patients of MCD had a shorter survival than those of UCD in our study, while the difference was not significant, that may be caused by bias out of small sample size and case loss during follow-up. However, the prognosis for UCD can be much worse when complicated with PNP. In our study, 60.0% (27/45) of cases had PNP, remarkably different from that (1/113, 0.9%) reported in a recent study of 113 cases of CD (11). The difference may be caused by ethnic variations between the studies.

Up to 80% of all retroperitoneal tumors are malignant, and the hypervascular tumor and invasive growth to adjacent organs and tissues in some cases of CD may result in misdiagnosis (12). The manifestations and features of imaging described in our study could help to make a correct diagnosis, although pathological diagnosis is the gold standard of confirmation.

Tumors of localized retroperitoneal CD without PNP present as biologically benign, with intact peplos covered, and the tumors are easy to resect. For those with PNP, due to the large areas of cutaneous and mucosal lesions, it is better to give large intravenous doses of gamma globulin preoperatively to neutralize the antibodies in blood to control the cutaneous lesions and ensure the safety of anesthesia and the integrity of the incision (13). Meanwhile, patients tend to display varying degrees of weight loss, electrolyte disturbance and hypoalbuminemia due to a long period of lower nutrition intake caused by severe erosions of the oral mucosa. In these patients, it is necessary to supplement electrolytes, fresh blood plasma and albumin and give parenteral nutrition support depending on the patient’s status. Blood gas analysis and pulmonary function should be tested preoperatively for those with BO to determine the pulmonary function reserve. In addition, antibiotics and glucocorticoids are recommended to control pulmonary infection if necessary (14).

Generally, tumors of retroperitoneal CD are benign, and patients can be completely cured through surgical resection. For most patients with PNP in our study, the rashes gradually vanished within one week, and there was relief of the mucosal lesions. Thus, complete resection of the tumor for localized retroperitoneal CD is an important factor for patient’s long-term survival, while palliative resection tend to lead to relapse and a much worse prognosis. Our results are similar to previous studies regarding the poor prognosis in CD patients complicated with BO (15-17). Multidisciplinary (especially dermatology) management is necessary for the treatment of CD with PNP.

The exact pathogenesis of CD leading to BO remains elusive, although it is known to be related to autoimmune response. Severe inflammation of the bronchus epithelium; destruction, reconstruction, fibrosis and stenosis of the bronchus; and limitations of alveolar ventilation lead to respiratory failure. Wang et al. showed that specific B cell clones were present in CD tumors, which could produce antibodies that recognized the antigens expressed in stratified squamous epithelia and transitional columnar epithelia. Thus immune response plays a key role in the development of BO (18). Understanding the pathogenesis of BO in CD with PNP could help develop effective therapies and improve the survival rate of these patients.

The literature has demonstrated the crucial role of HHV-8 and IL-6 in the pathogenesis of CD, and antiviral therapy and neoadjuvant therapy targeting IL-6 (e.g., siltuximab) have emerged as a focus of CD therapy (19-21). Our analysis of 2 patients who received palliative resection, finally relapsed and died indicates that adjuvant therapies may represent a potential treatment for those patients whose tumors are difficult to remove completely.

Funding: This study was funded by the National Natural Science Foundation of China (No. 81272710), and we thank all the patients those were enrolled in our study.

Ethical Statement: The authors are accountable for all aspects of the work in ensuring that questions related to the accuracy or integrity of any part of the work are appropriately investigated and resolved. The study was approved by the Ethics Committee of Peking University First Hospital.