Pancreatic adenocarcinoma is an aggressive malignancy with increasing incidence. In the United States alone there will be an estimated 55,440 new cases of pancreas cancer diagnosed in 2018, and an estimated 44,330 patients will die of the disease in the same year (1). Despite slight improvements in survival, the 5-year survival for patients with localized disease remains less than 35% (1).

In patients with resectable disease who undergo upfront surgical resection, randomized controlled trials have shown that the use of adjuvant chemotherapy improves survival (2,3) and is recommended by National Comprehensive Cancer Network (NCCN) guidelines (4). However, the proportion of patients who receive recommended chemotherapy after surgical resection is low. Previous studies have shown that at best, only around 60% of patients complete recommended adjuvant therapy (5-7). A review of the California Cancer Registry found that only 28% of patients received NCCN guideline compliant care consisting of surgery and chemotherapy or chemoradiation for resectable tumors (7).

As an alternative to the surgery-first approach, neoadjuvant therapy has many theoretical benefits. First, it ensures all patients start systemic therapy which is critical to obtain optimal survival outcomes. Additionally, it allows early aggressive disease to manifest itself, therefore minimizing the chance a patient undergoes surgery only to have disease progression shortly thereafter. Prior studies have shown that neoadjuvant chemotherapy and chemoradiation in resectable pancreatic adenocarcinoma is feasible, however it is unclear if resection rates or overall survival are significantly improved (8-12). Finally, patients who receive upfront chemotherapy are less likely to have positive lymph nodes or positive margins at the time of surgery (13,14). Typically, chemoradiation is used in the neoadjuvant setting in an attempt to optimize local tumor control; however, this therapy may add additional toxicities to the patient.

In order to verify resectability status, imaging at diagnosis was reviewed by two independent and blinded surgical oncologists to confirm the patient had resectable disease at presentation as defined by the NCCN guidelines (lack of arterial involvement and <180-degree involvement of superior mesenteric or portal vein) (4). If any disagreements occurred, the cases and imaging were reviewed together until a consensus decision was reached. Patients who did not have radiographically resectable disease at diagnosis were excluded. Patients were excluded if they had borderline resectable tumors, metastatic disease at diagnosis, or were treated with upfront surgical resection. Data for patients who met inclusion criteria were abstracted from our institutional Pancreatic Cancer Registry, which included demographics, pre-treatment evaluation, preoperative AJCC 7th edition TNM stage, preoperative imaging, CA19-9 levels, treatment plan, operative reports, pathology, post-chemotherapy and postoperative imaging, adjuvant treatment, complications, disease recurrence, and survival. Post-treatment imaging was re-reviewed by two independent and blinded surgical oncologists in order to assess for radiographic disease progression or regression. Pathologic specimens were reviewed by a blinded pathologist and specimens were given an Evans criteria score (15). The Evans score is a histologic grading scheme to quantify the presence or absence of a response to treatment in pathologic specimens (15). A grade I score indicates characteristic cytologic changes of malignancy but <10% tumor destruction, a grade II score indicates 10–90% of tumor cells destroyed, a grade III score indicates <10% of tumor cells are viable and a grade IV score indicates a complete response to treatment with no viable tumor cells present (15). For patients lost to follow-up, an online obituary search was performed as an attempt to determine vital status and date of death. 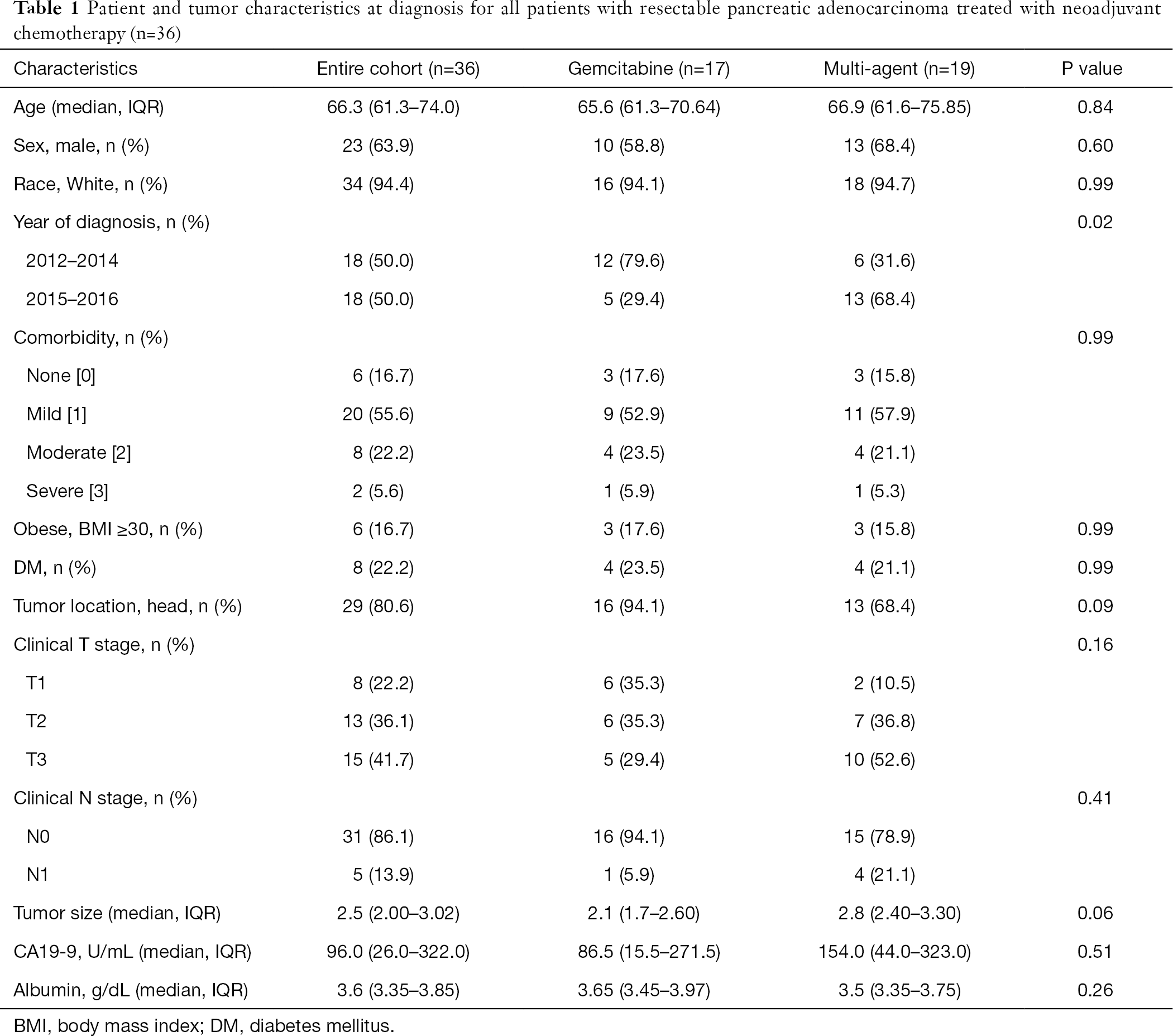 Treatment outcomes after neoadjuvant-intent chemotherapy are summarized in Table 2. No patient had evidence of local disease progression on re-staging imaging. However, 8% of patients (n=3) had distant metastatic disease which became evident during chemotherapy, two of which were on single agent gemcitabine. An additional 11% (n=4) had clinical deterioration precluding surgery, two patients were on single-agent chemotherapy and two patients were on multi-agent.

Among all patients who were started on neoadjuvant chemotherapy, 81% of patients (n=29) proceeded to the operating room, and 69% of patients (n=25) underwent pancreatic resection. Four patients underwent surgical exploration only, without resection, due to the intraoperative discovery of metastatic disease despite no evidence of disease on pre-operative pancreas protocol CT performed within 3 weeks of surgery. There was no statistically significant difference in resection rates between patients who began treatment with gemcitabine alone versus multi-agent chemotherapy (59% in the gemcitabine cohort and 79% in the multi-agent cohort; P=0.34).

Surgical and oncologic outcomes for the 25 patients who underwent a surgical resection are included in Table 3. Eighty percent of patients (n=20) had a pancreaticoduodenectomy and 20% (n=5) underwent a distal pancreatectomy. The overall R0 resection rate was 92% (n=23). There was no difference in R0 resection rates based on chemotherapy regimen (90% with gemcitabine alone, 93% with multi-agent chemotherapy, P=1.00). Venous resection was required in 12% of cases (n=3) and the lymph node positivity rate was 64% (n=16). On pathologic assessment of tumors, 11 patients (44%) had a pathologic Evans grade I treatment effect, while most patients (12, 48%) had an Evans grade II response. There was no difference in the response to chemotherapy between single agent versus multi-agent therapy (P=0.524). One patient in the single agent arm had a complete pathologic response to chemotherapy. 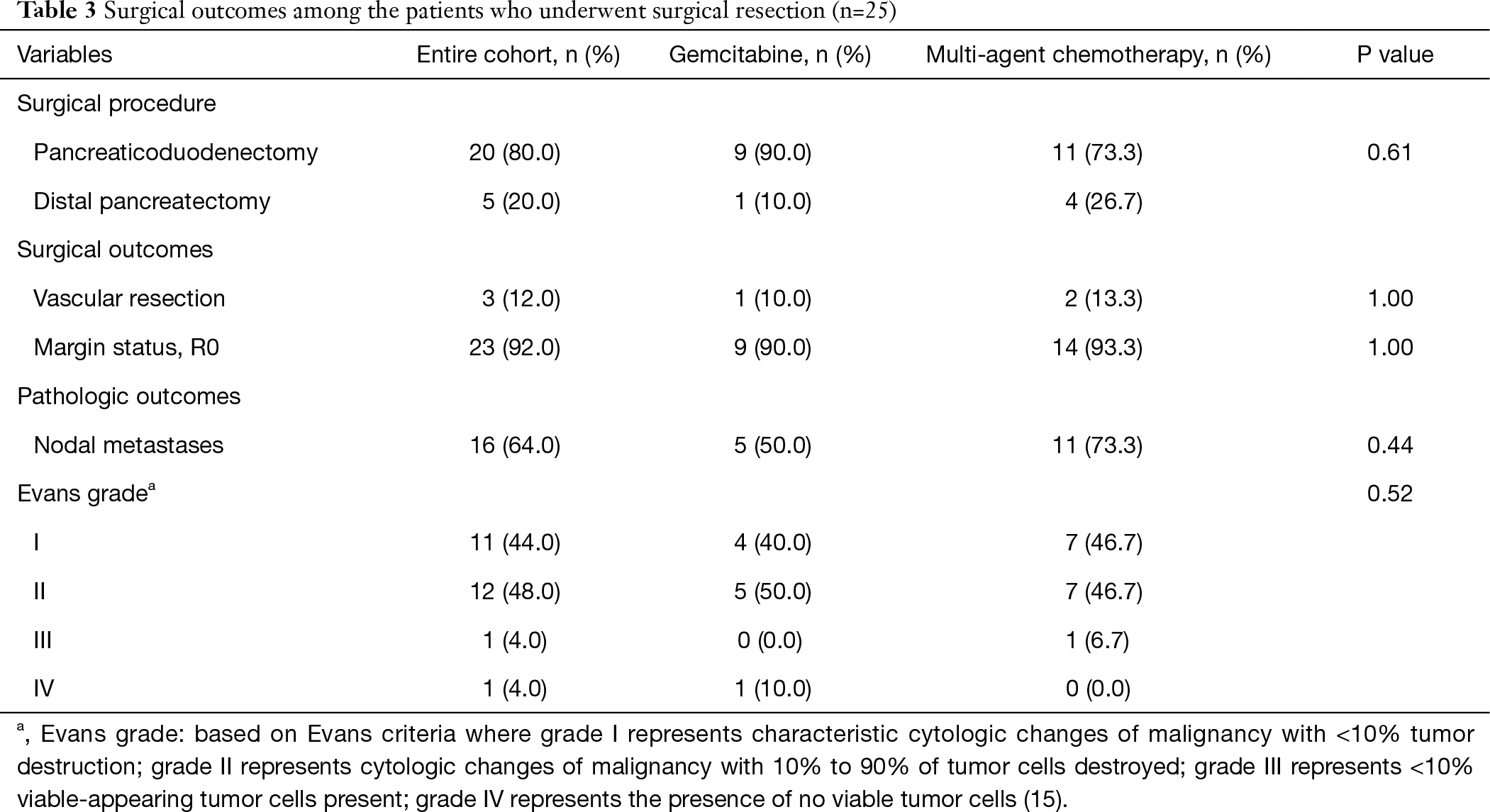 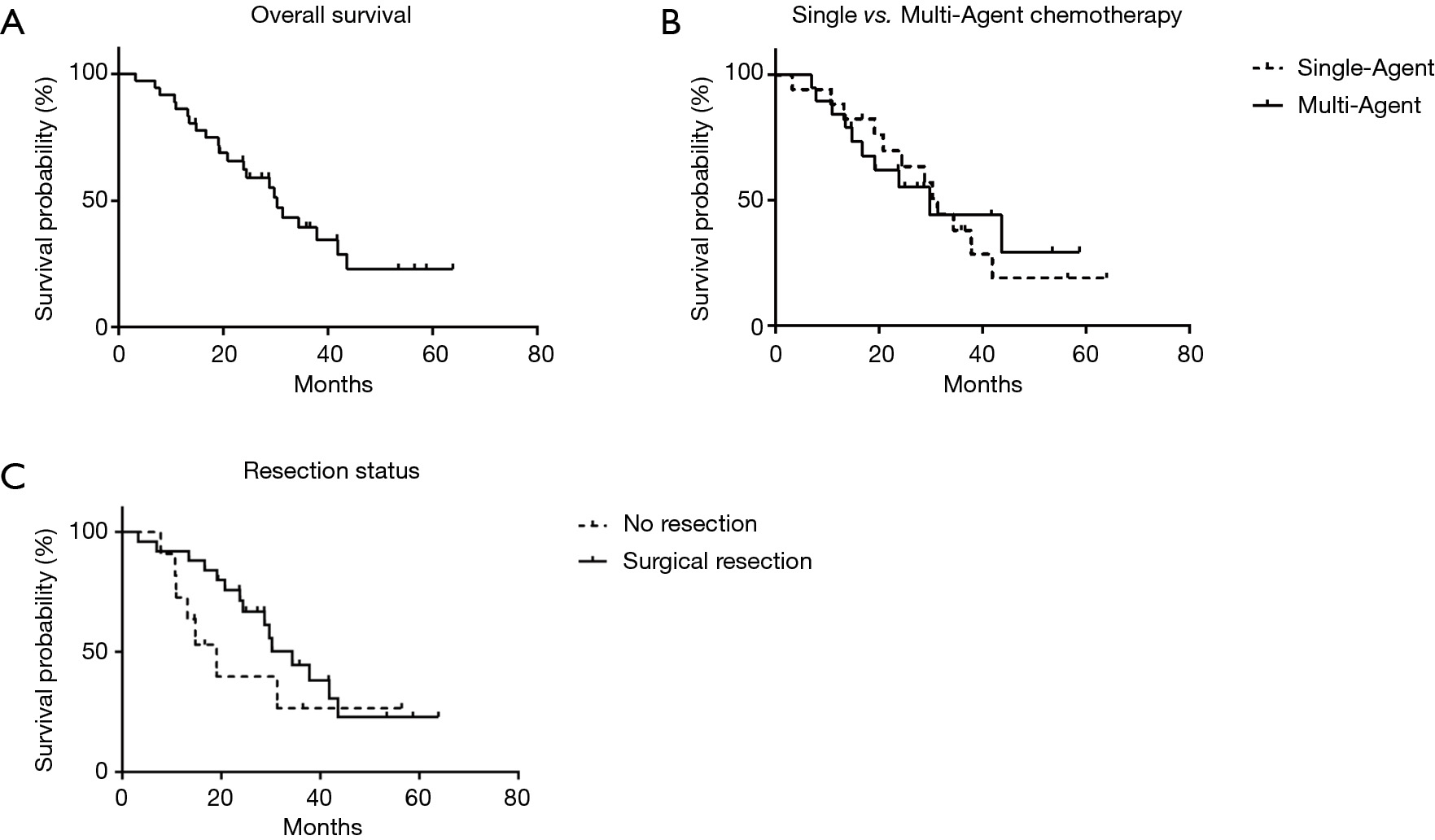 Pancreatic adenocarcinoma is an aggressive and morbid disease. Patients with resectable disease often have the best prognosis, however even after optimal treatment, median survival remains only 22–28 months, with merely 35% of patients surviving at 5 years (1,2). The proposed benefits of neoadjuvant chemotherapy are that it offers upfront systemic treatment to patients in an attempt to treat micrometastatic disease, assures a greater proportion of patients receive systemic chemotherapy and improves patient selection prior to surgical resection. We report a series of 36 patients who were treated on an intention-to-treat basis with neoadjuvant chemotherapy prior to surgical resection. Under this protocol, there was no local progression of disease, and 69% of patients proceeded to have surgical resection. Median overall survival for the entire cohort was 30.3 months, and was 34.4 months for patients who proceeded to resection. Although there was a trend towards higher resection rates among patients treated with multi-agent chemotherapy, overall survival was comparable among patients treated with multi-agent chemotherapy and those treated with single agent gemcitabine.

In the present study, a short course of neoadjuvant-intent chemotherapy was given to patients with resectable disease prior to reimaging and surgical planning. No patients had local progression of disease during neoadjuvant chemotherapy, supporting the use of systemic chemotherapy in the absence of radiation. This technique effectively provided the beneficial systemic effects of chemotherapy without the toxic side-effects of chemoradiation. The limiting factor precluding patients from surgical resection in this series was most commonly the discovery of distant metastatic disease, which was identified in almost 20% of patients who received neoadjuvant-intent chemotherapy. These patients that developed metastatic disease within 2–3 months of diagnosis and while on chemotherapy, likely had micrometastatic disease at the time of diagnosis. Therefore, this subset of patients would not have benefited from up-front surgical resection, as progression of disease while on systemic treatment is typically indicative of unfavorable tumor biology.

Although most patients had CA19-9 producing tumors, CA19-9 level at diagnosis did not correlate with more aggressive disease. Similarly, reduction of CA19-9 during chemotherapy did not predict resectability in our small cohort.

While this study is novel in describing a short course of neoadjuvant-intent chemotherapy without radiation in patients with pancreatic adenocarcinoma, we recognize several important limitations. As a retrospective single-institution chart review, there is inherent selection bias to the patients who were administrated neoadjuvant chemotherapy, as well as selection of specific chemotherapy agent. However, comparative statistics between the two groups only found a significant difference corresponding to date of diagnosis and not between patient characteristics. Lastly as a retrospective, single-institutional series the sample size of patients treated with neoadjuvant-intent chemotherapy is small; however, it is comparable to the current available studies on neoadjuvant chemotherapy in resectable pancreatic cancer.

Despite its limitations, this study shows that a short course of neoadjuvant-intent chemotherapy for resectable pancreatic adenocarcinoma is safe and potentially effective at selecting patients most likely to benefit from surgical resection. Under this treatment protocol, there was no local progression of disease and 69% of patients underwent surgical resection with a 92% R0 resection rate. Amongst those patients who did undergo surgery, median survival was 34.4 months, which compares favorably to patients who undergo upfront surgery followed by adjuvant gemcitabine plus capecitabine (28 months) (2). Survival outcomes in patients treated with neoadjuvant-intent gemcitabine alone was comparable to treatment with multi-agent chemotherapy. While we show that a short course of neoadjuvant-intent chemotherapy in patients with resectable disease is safe and offers good surgical and oncologic outcomes, further large scale, randomized trials are needed to fully characterize the role of neoadjuvant chemotherapy in patients with resectable disease.

The authors of this manuscript would like to thank Stephanie Lundgren and the entire Division of Surgical Oncology at the University of Minnesota for their assistance in the creation of this manuscript. The Abstract was previously presented at the Pancreas Club Annual Meeting, Washington, DC June 2nd, 2018.

Conflicts of Interest: All authors have completed the ICMJE uniform disclosure form (available at http://dx.doi.org/10.21037/hbsn.2019.04.17). The authors have no conflicts of interest to declare.

Ethical Statement: The authors are accountable for all aspects of the work in ensuring that questions related to the accuracy or integrity of any part of the work are appropriately investigated and resolved. Approval was obtained from the Institutional Review Board (No. 1612E01221). Our institutional Pancreatic Cancer Registry was queried for patients who received neoadjuvant-intent chemotherapy for pancreatic cancer.