Many retrospective or prospective studies have evaluated whether VEGF overexpression may be a prognostic factor for survival in patients with HCC. However, the results of the studies are inconclusive and no consensus has been reached. It is unknown whether differences in these investigations have been mostly due to their limited sample size or genuine heterogeneity. Thus, we conducted a meta-analysis of all available studies relating VEGF with the clinical outcome in patients with HCC.

The electronic databases PubMed and CNKI (China National Knowledge Infrastructure) were searched for studies to include in the present meta-analysis. An upper date limit of June 01, 2013 was applied; we used no lower date limit. Searches included the terms “hepatocellular or liver”, “cancer or carcinoma or tumour or neoplasm”, “VEGF”, “vascular endothelial growth factor”, and “prognosis”. We also reviewed the Cochrane Library for relevant articles. The references reported in the identified studies were also used to complete the search.

Studies eligible for inclusion in this meta-analysis met the following criteria: (I) measure VEGF expression in the primary hepatocellular carcinoma tissue with immunohistochemistry (IHC) or RT-PCR/ELISA (reverse transcription-polymerase chain reaction/enzyme linked immunosorbent assay); (II) provide information on survival [i.e., disease free survival (DFS) and/or overall survival (OS), studies investigating response rates only were excluded] and (III) When the same author reported results obtained from the same patient population in more than one publication, only the most recent report, or the most complete one, was included in the analysis. Two reviewers (P.Z. and Q.Q.) independently determined study eligibility. Disagreements were resolved by consensus.

Included studies were divided into two groups for analysis: those with data regarding OS and those regarding DFS. For the quantitative aggregation of the survival results, we measured the impact of VEGF overexpression on survival by HR between the two survival distributions. HRs and 95% confidence intervals (CIs) were used to combine as the effective value. If the HRs and their 95% CIs were given explicitly in the articles, we used crude ones. When these variables were not given explicitly, they were calculated from the available numerical data using methods reported by Parmar et al. (9).

Heterogeneity of the individual HRs was calculated with χ2 tests according to Peto’s method (10). Heterogeneity test with inconsistency index (Ι2) statistic and Q statistic was performed. If HRs were found to have fine homogeneity, a fixed effect model was used for secondary analysis; if not, a random-effect model was used. DerSimonian-Laird random effects analysis (11) was used to estimate the effect of VEGF overexpression on survival. By convention, an observed HR >1 implies worse survival for the group with VEGF overexpression. The impact of VEGF on survival was considered to be statistically significant if the 95% confidence interval (CI) did not overlap with 1. Horizontal lines represent 95% CIs. Each box represents the HR point estimate, and its area is proportional to the weight of the study. The diamond (and broken line) represents the overall summary estimate, with CI represented by its width. The unbroken vertical line is set at the null value (HR=1.0).

Fourteen studies (14-27) published between 1997 and 2013 were eligible for this meta-analysis. All reported the prognostic value of VEGF status for survival in HCC patients. The total number of patients included was 1,449, ranging from 36 to 314 patients per study (median 103). The major characteristics of the 14 eligible publications are reported in Table 1. The studies were conducted in 2 countries (China and Japan). Among the 14 studies, all studies were performed in Asian populations. 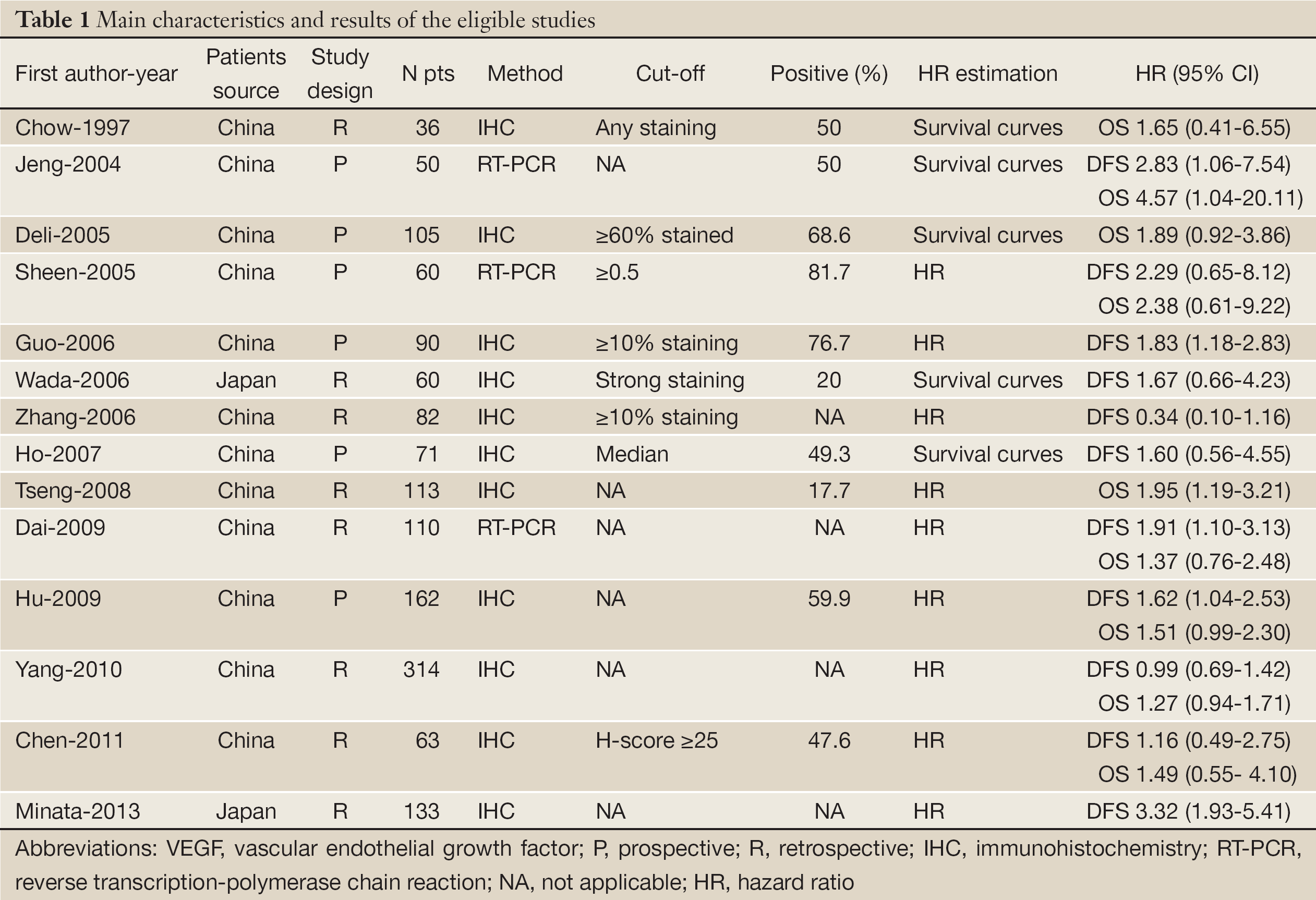 All of the studies reported the prognostic value of VEGF status for survival in patients with HCC tissue. Of the 14 studies, 9 directly reported HRs (multivariate analysis), while the other 5 studies provided survival curves. Among them, the proportion of patients exhibiting VEGF overexpression in individual studies ranged from 17.7% to 81.7%. Estimation using survival curves were segregated according to either OS or DFS. A HR on DFS and OS could be extracted for 11 publications and 9 publications of studies, respectively. Seven of the 14 studies identified VEGF overexpression as an indicator of poor prognosis, and the other 7 studies showed no statistically significant impact of VEGF overexpression on survival. 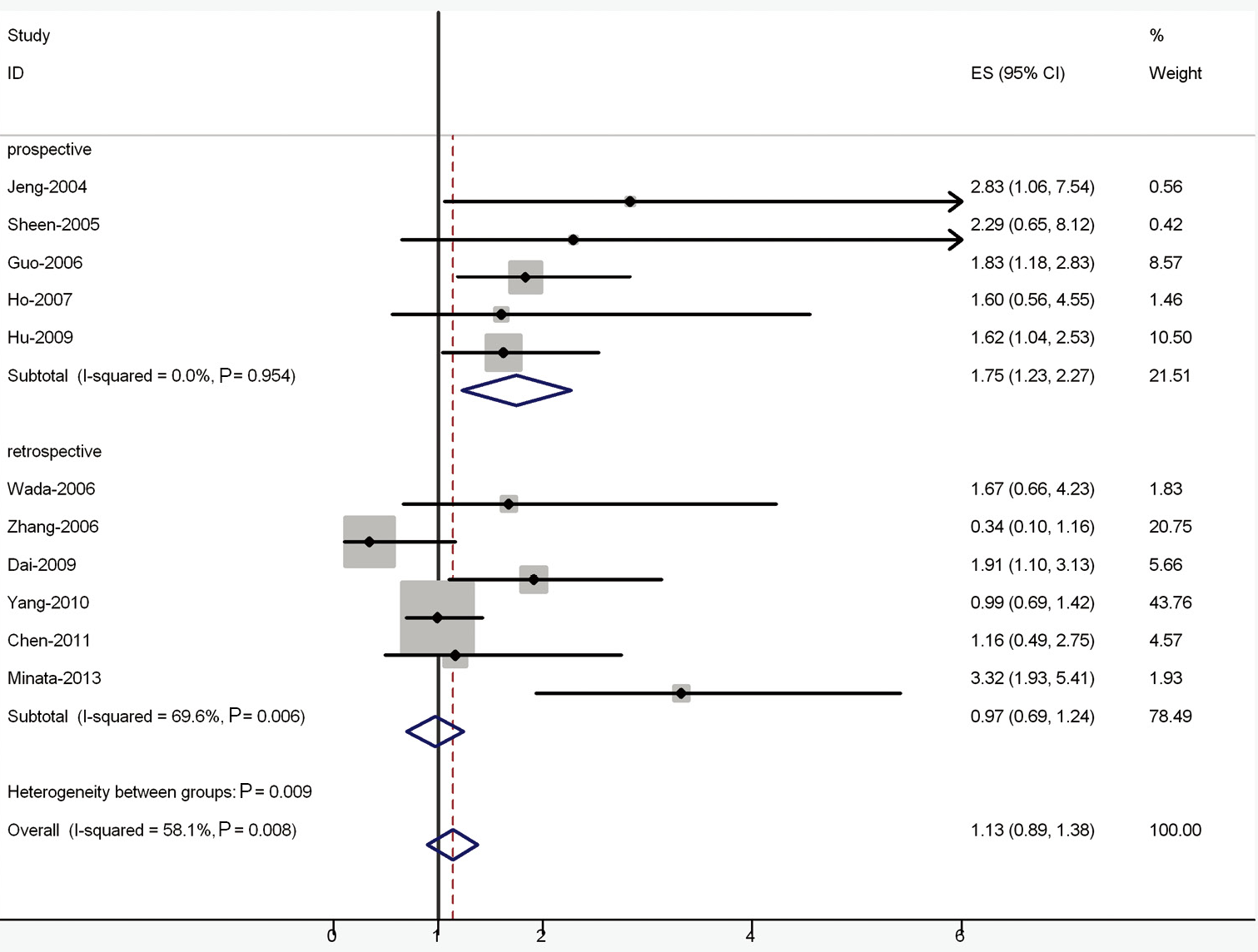 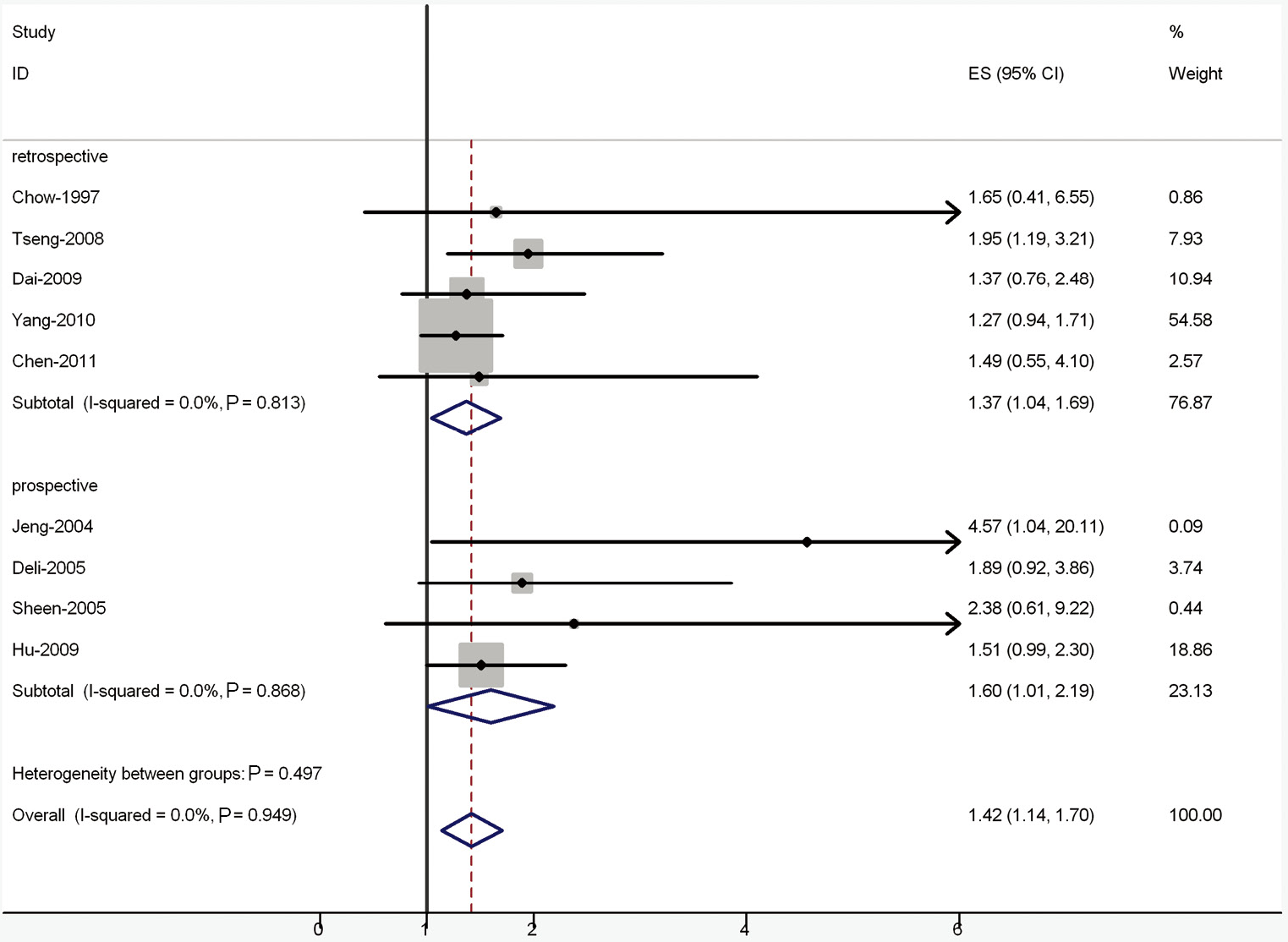 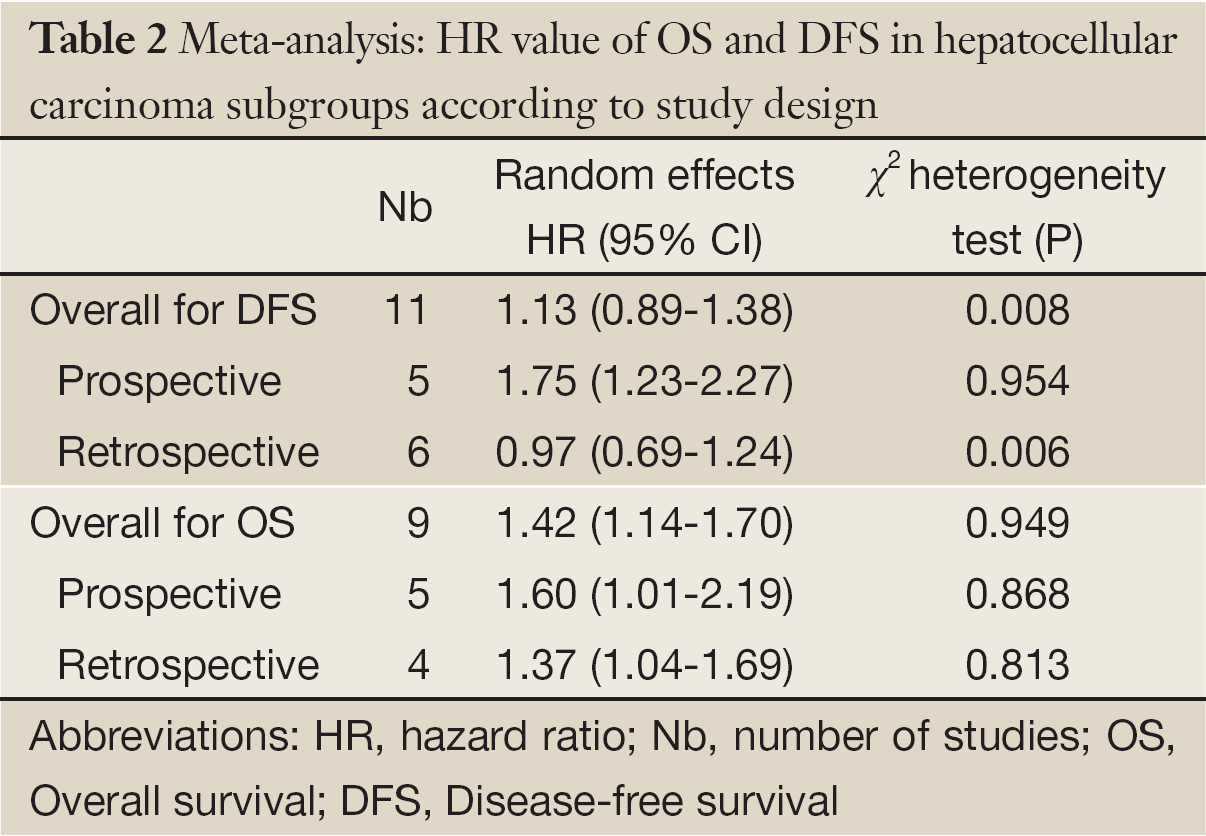 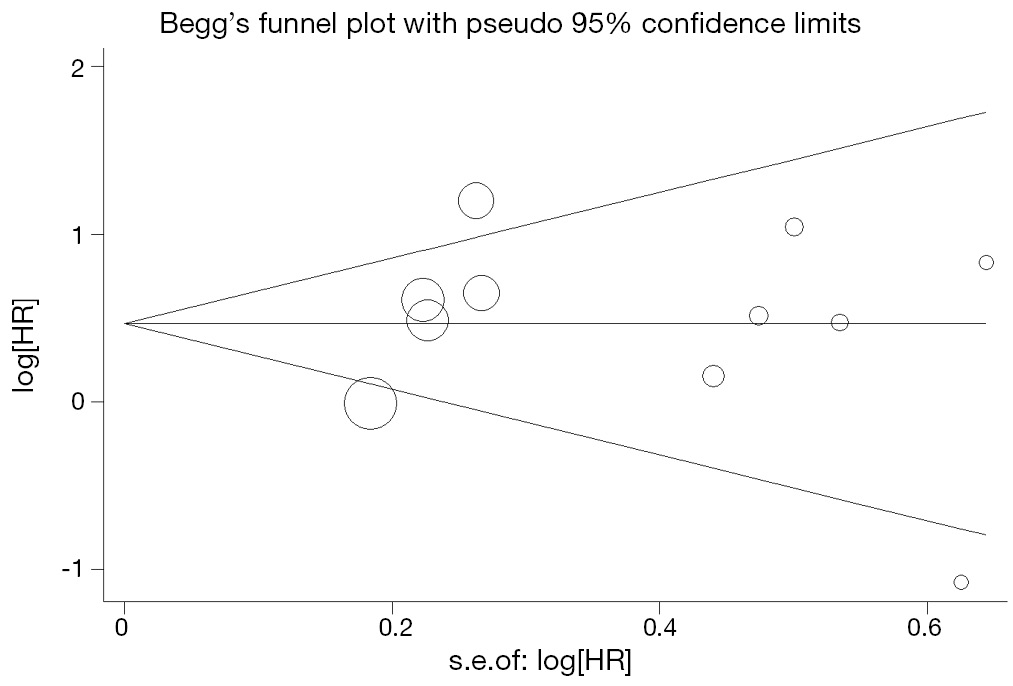 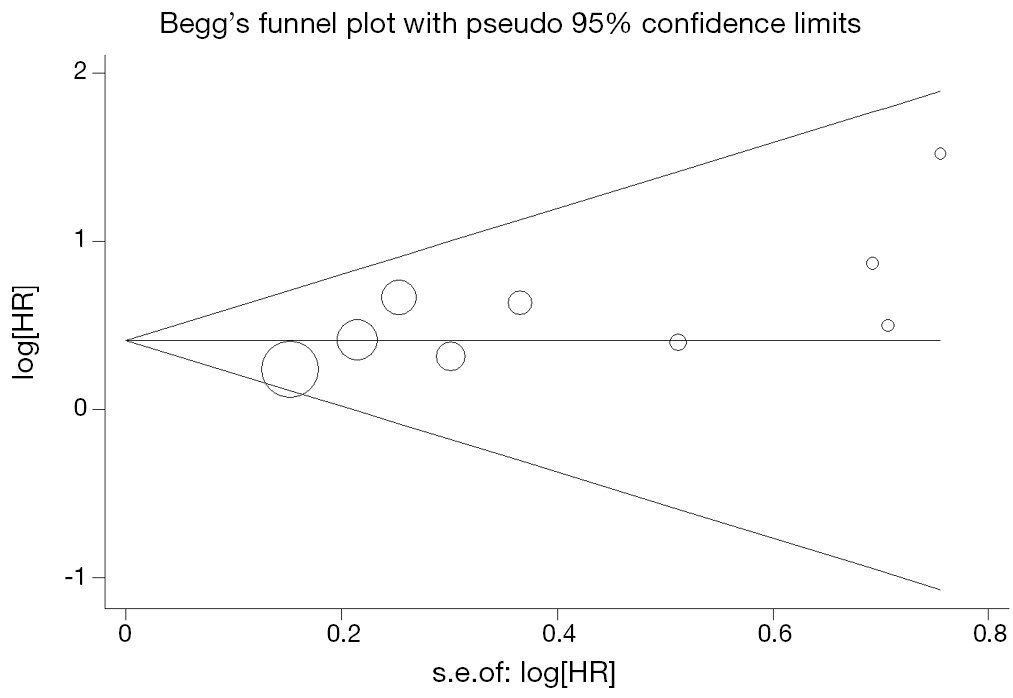 Members of the VEGF family promote two very important processes in vivo, angiogenesis and lymphangiogenesis, which involve growth of new blood and lymphatic vessels from pre-existing vasculature, respectively. VEGF-A exists as a homodimer or can heterodimerize with either VEGF-B or non-VEGF factors such as PIGF (placenta growth factor) (28-30). VEGF-A and VEGF-B promote vascular angiogenesis primarily through activation of vascular endothelial cell associated VEGFR-1 (Flt1) and VEGFR-2 (Flk1/KDR). On the other hand, VEGF-C and VEGF-D which are ligands for VEGFR-2 and VEGFR-3, promote angiogenesis and lymphangiogenesis (31,32).

Our data were consistent with the results of a previous meta-analysis (33) published in 2009 that showed an association between VEGF overexpression and poor survival of patients with HCC. This analysis included only 8 studies, and the data were insufficient to determine the prognostic value of VEGF in different study designs. We have improved upon that previous meta-analysis by including more recent related studies and by generally using a more comprehensive search strategy. Screening, study selection and quality assessment were performed independently and reproducibly by two reviewers. We also explored heterogeneity and potential publication bias in accordance with published guidelines.

There were several meta-analyses studying the prognostic value of VEGF in other cancer types, such as head and neck squamous cancer (34), lung cancer (35), colon cancer (36), gastric cancer (37), and hepatocellular carcinoma (38). Association of VEGF overexpression with poor outcomes provides a rationale for anti-angiogenics use in the treatment of cancer. VEGF has become a leading therapeutic target for the treatment of cancer. Potentially therapeutic strategies to inhibit VEGF pathway include monoclonal antibodies directed against VEGF, tyrosine kinase inhibitors (TKIs), and antisense strategies (39). Bevacizumab (Avastin) is a humanized monoclonal antibody directed against VEGF (40). It binds to all isoforms of VEGF-A, thus blocking its binding to VEGFR, but it does not bind to other VEGF molecules, such as VEGF-B or VEGF-C.

The heterogeneity issue was complicated in the systematic review and meta-analysis was. We found no significant heterogeneity among all studies included and subgroup analysis. Another potential source of bias is related to the method of HR and 95% CI, extrapolation. If these statistics were not reported by the authors, we calculated them from the data available in the article. If this was not possible, we extrapolated them from the survival curves, necessarily making assumptions about the censoring process. Data for multivariate survival analysis reported in the article were included in the present systematic review and meta-analysis; if these data were not available, data calculated from survival curves by univariate analysis were included. These results should be confirmed by an adequately designed prospective study. Furthermore, the exact value of VEGF overexpression status needs to be determined by appropriate multivariate analysis.

Publication bias (41) is a major concern for all forms of meta-analysis; positive results tend to be accepted by journals, while negative results are often rejected or not even submitted. The present analysis does not support publication bias; the obtained summary statistics likely approximate the actual average. However, it should be noted that our meta-analysis could not completely exclude biases. For example, the study was restricted to papers published in English and Chinese, which probably introduced bias.

In conclusion, our meta-analysis estimated the association between prognostic significance of VEGF positivity and patients with HCC. As determined in our meta-analysis, we concluded that VEGF expression was associated with poor overall survival, but not in disease-free survival, and there is significant heterogeneity among DFS studies. To strengthen our findings, well-designed prospective studies with better standardized assessment of prognostic markers should help to explore the relation between VEGF overexpression and survival of HCC.