Colorectal cancer (CRC) is the third most common cancer in the United States (1). The most important prognostic factor is the TNM stage and up to 60% of patients with CRC will develop metastases during the course of their disease (2). Outcomes in these patients depend heavily on the nature and extent of distant metastases (3). The significance of primary tumor characteristics, such as lymph node (LN) status on survival in patients with Stage II/III CRC is well established (4,5). The implications of primary tumor draining LN burden are considered less pivotal in the setting of stage IV disease.

National guidelines recommend evaluation of at least 12 LNs for adequate staging in CRC (6). The extent of nodal involvement is a well established prognostic factor in patients with non-metastatic CRC (4,5,7). In addition to conventional LN status, several authors have proposed surrogate methods of nodal assessment for more accurate staging (8,9). Of those, a valuable tool is the lymph node ratio (LNR), defined as the ratio of positive LNs to the total number of nodes harvested. Recently, the significance of LNR has been explored for various neoplasms including CRC. Although some authors have suggested a role for LNR in stage IV CRC (9,10), the relative dearth of such evidence limits its utility in planning multimodality management of these patients.

The majority of patients with stage IV CRC have liver dominant metastatic disease. Outcomes in such patients are defined by the extent of hepatic tumor burden (3,11). Although aggressive primary tumor characteristics portend a high risk for distant metastases (10,11), the correlation between primary tumor biology and the extent of intrahepatic metastatic disease requires further clarification. The biologic significance of nodal staging in patients with liver metastases (LM) may become increasingly important as patients with synchronous disease are more likely to obtain control of their liver disease with more effective systemic regimens and potentially immunotherapy (12). As such, patients who present with synchronous LM are likely to undergo primary tumor resection at some point during the course of their disease (13).

With approval of the Institutional Review Board and in accordance with Health Insurance Portability and Accountability Act regulations, a prospectively maintained Roger Williams Cancer Center tumor database was used. Between 2004 and 2011, 79 patients with stage IV CRC were treated at our institution. We excluded 26 patients who did not undergo resection of the primary tumor. Retrospective chart review was then performed on the remaining 53 patients that met final inclusion criteria. Variables examined included age, gender, primary tumor site, LN status, burden of hepatic metastases, carcinoembryonic antigen (CEA) level, presence of extra-hepatic metastases and surgical intervention.

Odds ratio (OR) calculations were used for quantitative assessment of associations and statistical analysis was derived using the chi-square test. A multiple regression model was utilized to determine multivariate statistical independence on factors that were found to be significant on univariate comparison. LNR was defined as the ratio of primary tumor LN with metastatic carcinoma to the total number of LN retrieved. With the assumption of a normal distribution of data, all the associated variables were tested on a correlation matrix using the Pearson product-moment correlation test. Correlation coefficient was calculated by linear regression. LNR cut-off values were analyzed for predictability using receiver operating characteristic (ROC) curves. Survival curves were generated using the Kaplan-Meier (KM) method and statistical comparison was done using the log-rank test. The cox regression model was used for multivariate survival analysis. All statistical analyses report 95% confidence intervals (CI) and were performed using SPSS for windows (SPSS Inc, Chicago, IL, USA). Significance of difference was assumed at P<0.05.

The decision and timing of surgical resection of primary tumor and LM was based on clinical assessment by a surgical oncologist in conjunction with a multidisciplinary team. Extent and nature of hepatic surgery was similarly individualized for each patient based on rigorous clinicopathologic evaluation. Patients were selected for hepatic resection when complete tumor clearance was possible along with an anticipated adequate liver remnant.

Age and gender were fairly well distributed within both groups. Most primary tumors were of colonic origin (72%), while the remaining were rectal adenocarcinomas. The median CEA level was 16.5 ng/mL (range, 0.5–2,725 ng/mL). This value was used as a cutoff for comparative analysis. Among all patients, 51% had >3 LM, 51% had bilobar hepatic involvement and 45% had a hepatic metastasis >5 cm. Sixteen patients (30%) had extrahepatic metastases, with lung being the most common site of disease outside the liver. Fourteen patients with extrahepatic metastases (n=16, 88%) did not undergo any hepatic surgery. All patients received chemotherapy either in the neo-adjuvant or adjuvant setting. The dose and timing of chemotherapy was individualized to each patient after a multidisciplinary discussion. Fifteen patients with rectal cancer (n=15, 100%) and 12 patients with colon cancer (n=38, 32%) received neo-adjuvant chemotherapy prior to resection of the primary tumor. 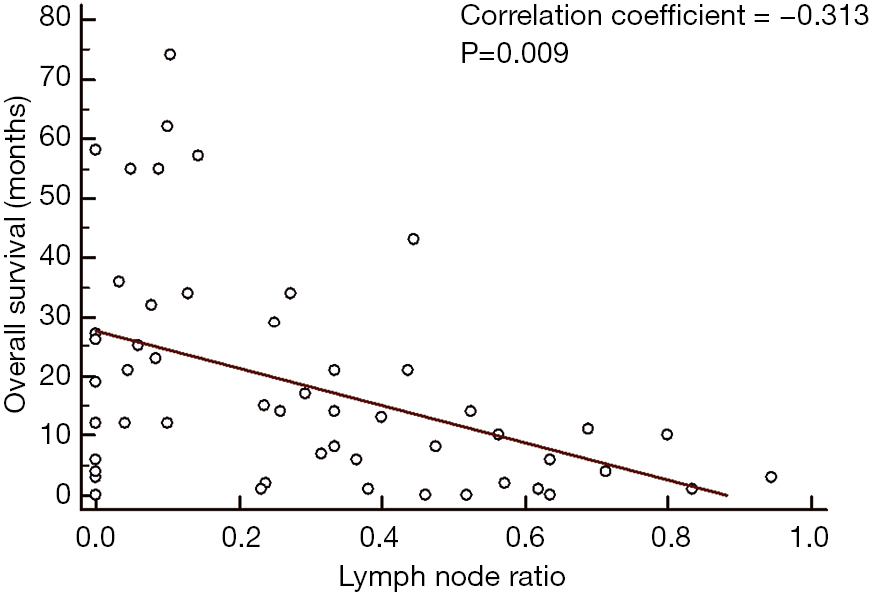 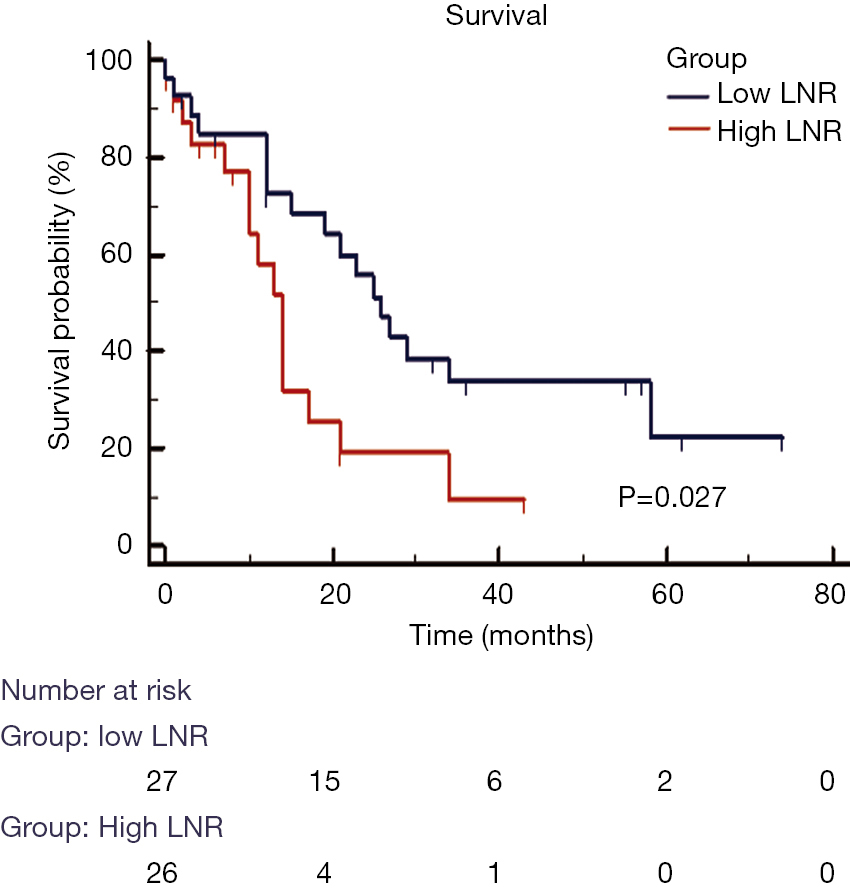 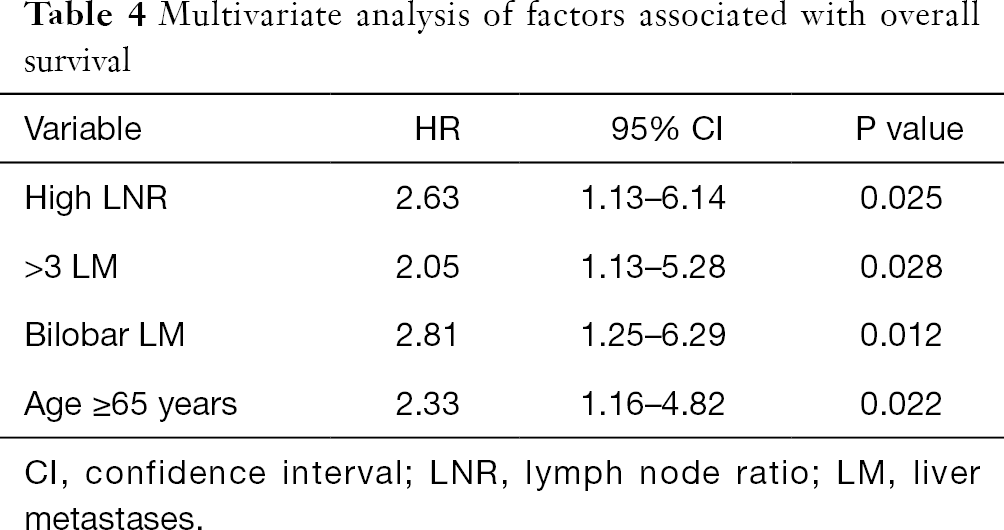 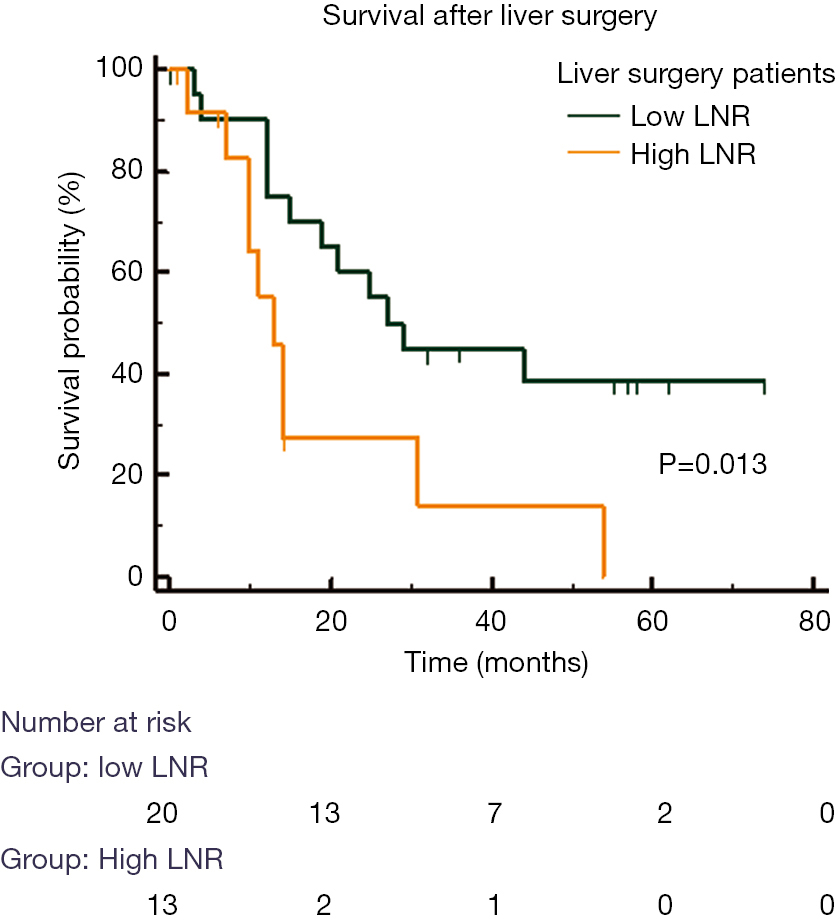 The management of patients with stage IV CRC has evolved considerably over the past decade. Advances in multimodal care have led to improved survival outcomes (14). Although LN status serves as a strong prognostic determinant in CRC patients without distant metastases, the significance of primary tumor LNR is not well understood in the context of stage IV disease. Outcomes in such patients are largely defined by the extent and nature of hematogenous metastatic disease (13). We have demonstrated that primary tumor LNR predicted long-term survival following resection of LM and served as an independent predictor of intrahepatic tumor burden.

Currently, national guidelines recommend retrieval of at least 12 LN for appropriate staging in CRC (6). Nodal stage is determined by the number of positive nodes in the current TNM staging system (AJCC 7th edition), as opposed to LNR. Adequate lymphadenectomy enables appropriate staging of patients, which greatly facilitates management decisions in patients with CRC (15). Although adequate nodal staging should be attempted in all patients, a variety of factors can influence the number of LN ultimately retrieved. Appropriate surgical technique along with diligent pathologic examination of resected specimen are required to consistently attain that goal (16,17). Due to variability in surgical technique and pathologic assessment of specimens, recent studies have proposed alternative LN parameters which may be more reliable than standard nodal staging in predicting outcomes (8,9). The most thoroughly investigated alternative nodal staging approach is LNR (18,19).

The prognostic significance of LNR has been well established for several solid organ malignancies (20,21), including CRC (22). Few studies have evaluated the role of LNR in stage IV CRC. Derwinger and Gustavsson (10) reported worse survival outcomes with increasing LNR in patients with stage IV CRC. However, in that study, the median number of nodes assessed was 10, whereas it is 17 in our present report. Furthermore, the authors did not correlate LNR with extent of intrahepatic metastatic disease. Ozawa et al. (23) recently reported a relationship between LNR and survival in patients with metastatic CRC. In our patients, the median survival of stage IV CRC patients was 26 months in the L-LNR group and 14 months in the H-LNR group. Similarly, for patients with high risk features or those who had undergone surgical intervention for CRLM, the 5-year OS was significantly better in the L-LNR group.

Vaccaro et al. (24) showed that LNR >0.25 was an independent prognostic factor for overall and cancer specific survival in patients with non-metastatic CRC. Several other LNR cutoffs have been proposed based on quartiles, means and various other statistical derivations without any reliable consensus (25,26). We used the median LNR as the cutoff as reported by Ozawa and colleagues (23). On ROC analysis, this cutoff value was found to be the most accurate in predicting hepatic tumor burden and survival in our patients. Importantly, we confirmed in our study group that LNR correlated with survival time in a continuous manner, indicating that our results were not dependent on a particular LNR value.

The majority of patients with stage IV CRC present with liver-only or liver-dominant metastatic disease. All of the patients included in our study had LM and 30% had extra-hepatic disease as well. Surgical resection of CRC LM is the preferred approach (27,28) but unfortunately many patients who are diagnosed with metastatic disease are found to be unresectable at the time of initial evaluation (29). Pathological characteristics of the primary tumor, including LNR, predict the extent of metastatic disease and may assist in identifying high risk patients. In our study, LNR was associated with the presence of more than 3 LM and bilobar disease. Both of these factors weigh heavily when a patient is considered for liver surgery (30). This association may be used to identify patients undergoing liver surgery who are at high risk for recurrence and potentially benefit from neoadjuvant therapy or require more intensive surveillance.

Due to the retrospective design, the exact influence of specific confounding variables could not be quantified. We speculate that the longevity in survival seen in patients with low LNR was influenced by favorable tumor biology in general. While adjuvant therapy likely impacted the outcome of patients in our study, our small sample size did not allow us to examine this in stratified fashion. However, the association of survival with LNR remained significant on multivariate model. Due to improvements in multimodality care, patients with LM from CRC are experiencing prolonged periods of disease control. Primary tumor biologic surrogates, such as LNR, may acquire increased relevance in patients with LM who survive for extended periods of time.

With the development of novel therapeutic options, patients with stage IV CRC have improved outcomes. Risk stratification of these patients may further assist in improvement of care and potentially open avenues for further progress. Considering LNR for patients with metastatic CRC who have undergone surgical resection of the primary tumor should be considered a routine parameter in the evaluation of these patients. Our study defines the potential utility of LNR in predicting hepatic tumor burden and survival, which may influence the complex decisions surrounding multimodality management of patients with stage IV CRC. We believe that even in the setting of stage IV disease, if resection of the primary tumor is required, principles of appropriate nodal staging should be practiced.

We would like to acknowledge the contribution of Cheryl Raffel, cancer tumor registrar, for assisting in data acquisition.

Ethical Statement: The study was approved by institutional ethics board of Roger Williams Medical Center (No. 00000088888) and written informed consent was obtained from all patients.