Advancements in liver surgery have gradually extended the indications for resection of colorectal liver metastases (CRLMs) (1). A variety of surgical techniques are currently available to resect CLRMs, including two stage procedures, vascular reconstructions, and portal vein embolization to increase postoperative liver volume. The criteria for resectability of CRLMs have shifted in the last decade to include any patient in whom all disease can radically be removed with the preservation of sufficient functional remnant liver. Recent data justify an aggressive surgical approach of CRLMs with 5-year survival rates of 40–50% (2).

Combined liver resection and extrahepatic bile duct resection with biliary-enteric reconstruction may be useful in treating CRLMs with hilar biliary invasion. The surgical technique has been increasingly used for resection of perihilar cholangiocarcinoma in recent years, which has resulted in improved experience in specialized centers (4). Nonetheless, surgical and oncological outcomes of this technique remain largely unknown when used for CLRM with biliary invasion: previous studies describe mostly single cases or small series of patients.

To assess the feasibility, safety and survival associated with this technique, we present a case-cohort analysis of all patients who underwent major liver resections for CRLMs in our center, and compared patients with and without extrahepatic bile duct resection. To elucidate currently available evidence, we also performed a systematic literature search to provide an overview studies focusing on surgical treatment of patients with CLRM with biliary invasion.

This study was conducted in accordance with the declaration of Helsinki, and was approved by the local ethical committee. Patients who underwent a major liver resection for CRLM (i.e., resection of three or more liver segments) at the Academic Medical Centre in Amsterdam between 2003 and 2013 were selected from a prospective database. Retrospective data collected from the medical reports included demographics, presenting symptoms, synchronous or metachronous metastasis, primary tumor origin, surgical reports, and pathology reports. Patients with extrahepatic biliary invasion from a centrally located metastasis underwent a combined liver and extrahepatic bile duct resection and biliodigestive reconstruction. Bile duct resection was similar in all patients, consisting of biliary resection up to the cranial margin of the pancreatic head in combination with complete lymph node dissection of the hepatoduodenal ligament. Biliodigestive reconstruction was performed using single or multiple hepatico-jejunostomies. Neo-adjuvant treatment was not routinely adopted during the study period. None of the patients with biliary obstruction received chemotherapy in the preceding months prior to surgery because of recent jaundice.

For the first search we used the following medical subject headings/Mesh terms and key words: colonic neoplasms, rectal neoplasms, colorectal neoplasms, liver metastastases, metastatic liver disease, hepatectomy, liver resection, metastasectomy, hepatobiliary, bile ducts, extrahepatic, biliary tree, hilar and anastomosis, Roux-en-Y with exclusion of hepatocellular, HCC, Klatskin, Klatskin’s tumor and cholangiocarcinoma. Title and abstract of all articles were scanned for their relevance on the subject. The second search was performed to cover the reports of combined liver and biliary resections within (systematic) review articles for the last 5 years. We used the following search in PubMed: colorectal neoplasms [Mesh] AND hepatectomy [Mesh] AND (“2008/05/23”[PDat]: “2013/05/21”[PDat]). Similar searches were performed in Cochrane Library and Medline.

Two observers (Wouter W. te Riele and Tristan H. van Dongen) inspected the title and abstract of citations to identify relevant papers for which we obtained the full texts. All prospective or retrospective case reports or cohort studies were included in the analysis if they presented an assessment of surgical resection of CRLM with biliary invasion. Selection of articles was limited to articles describing human subjects in English language. Data were extracted from all included manuscripts, including patient characteristics, surgical technique, pathology results, and survival.

During the study period, 753 liver resections were performed in our single institution, of which 271 were major liver resections (3 or more Couinaud segments). A total of 76 patients underwent major liver resection for histologically proven CRLM, and were included in this study. Ten patients (13%) had biliary invasion from a centrally located hepatic metastasis and underwent a concomitant biliary resection with biliodigestive reconstruction. Clinicopathological, surgical and outcome data from patients with and without biliary invasion are presented in Table 1. 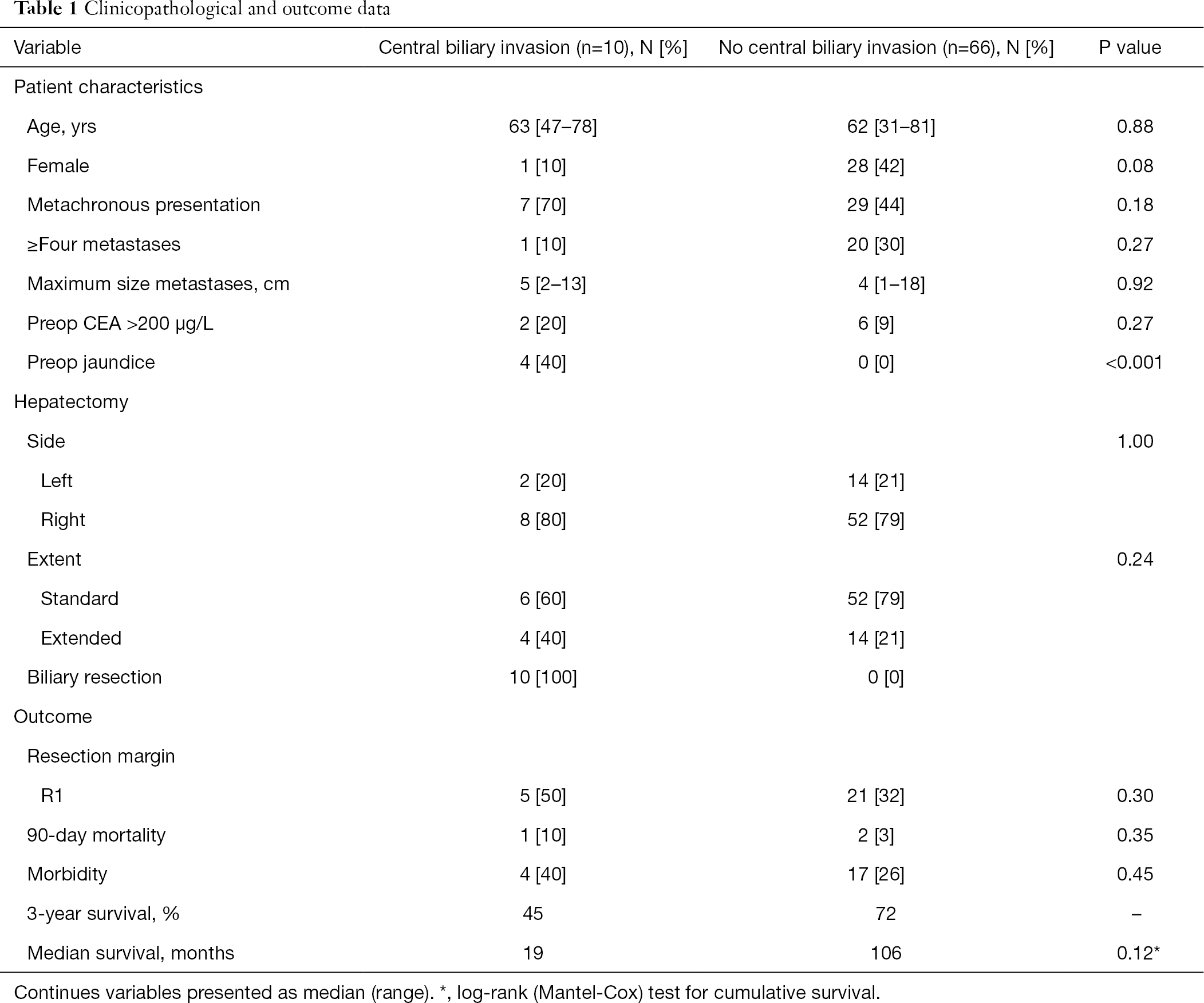 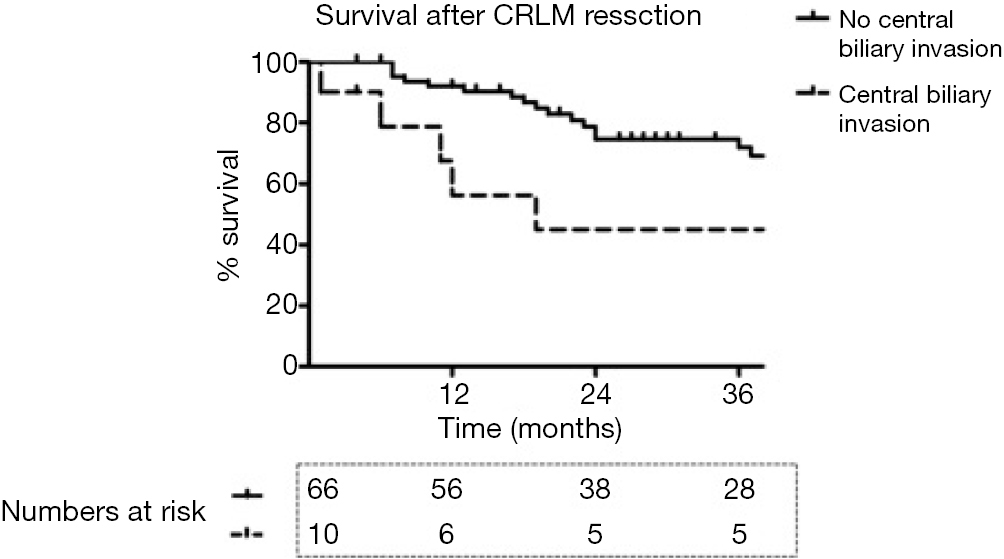 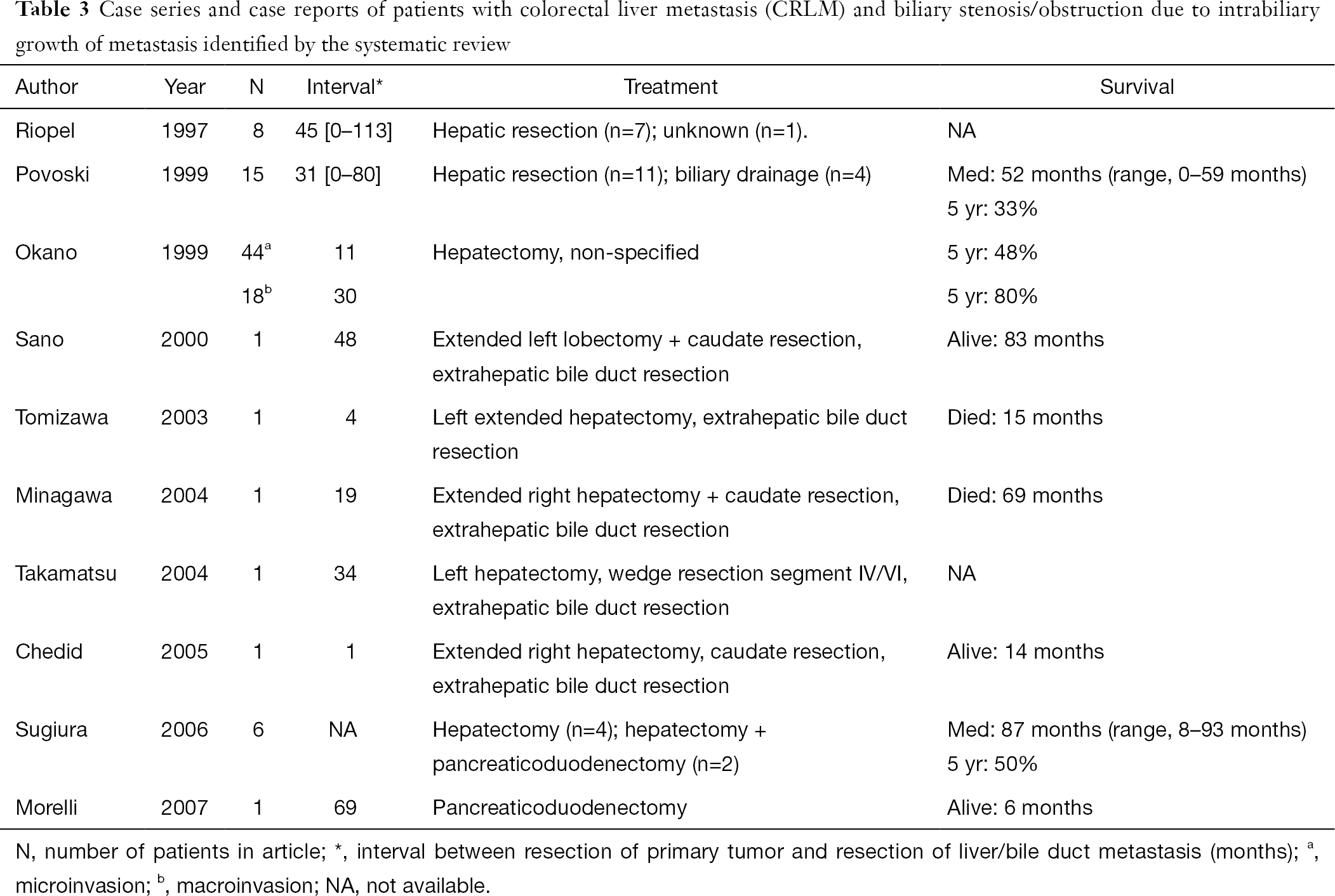 An additional five case reports were identified, in which combined hepatectomy and extrahepatic bile duct resection for CLRM with biliary invasion were reported (8-11,14). Two patients were alive after 83 and 14 months, and two patients died after 69 and 15 months, respectively. Notably, one case report was identified describing a patient with a pancreatic metastasis of a colorectal carcinoma with infiltration of the intrapancreatic tract of the common bile duct (13). This patient underwent a pancreatoduodenectomy and was alive after 6 months.

One of the problems using diagnostic imaging tests like ultrasound, CT, MRI or endoscopic retrograde cholangiography, is the difficulty to discriminate between intrahepatic cholangiocarcinoma and metastatic adenocarcinoma. It has been suggested that rapid growth of the tumor and rapid increase in CEA and/or CA 19.9 levels are more suspicious for bile duct metastases in patients with a history of CRLM, rather than for cholangiocarcinoma (7). Nevertheless, intraoperative recognition of bile duct invasion by a CRLM seems to be more common than preoperative clinical or radiographic recognition.

The basic principle of surgical treatment of CRLMs is to obtain negative surgical margins by radical excision of all metastases. This principle should be maintained in this rare type of CRLMs with biliary invasion. The observation of Sugiura et al. that biliary invasion of CLRM mostly comprises both macroscopic and microscopic tumor involvement of bile ducts is supported by the findings from our study. Therefore, a recommendation can be made to use a combined hepatectomy and extrahepatic bile duct resection for patients with CRLMs and biliary invasion, in order to achieve good local control and curative resection (6,12). By analogy with hilar cholangiocarcinoma, the concept of hilar resection in conjunction with liver resection is based on a three-dimensional perception of the tumor located centrally in the liver. Tumor extension can occur from the bile duct confluence to the right and left biliary tree along the main hepatic bile duct and segmental bile ducts. The tumor can also invade anteriorly into the duct of segment 4 and posteriorly into the duct of segment 1. Ductal extension should be evaluated during operation and resection of segment 4 or 1 should be considered (4). Contrary to resection of ‘normal’ parenchymal CRLMs, anatomic resection according to the segmental biliary division seems to be preferred in metastases with biliary invasion to avoid recurrence in the remnant liver.

The current study was not able to analyze the effect of an R1 resection compared to the effect of chemotherapy only, which would be interesting to see in future studies. Nevertheless, patients with an R1 resection in this study had remarkably short disease-free and overall survival, so an R1 resection does not seem to justify the burden of major liver surgery and associated mortality. It seems preferable to select patients with CRLMs and extrahepatic biliary invasion for surgical treatment only if radiological staging predicts a high chance of a radical (R0) resection, although this can only be ascertained at surgical exploration.

The pattern of invasion of CLRMs into the bile duct has been described by Riopel and Takamatsu (7,14). Firstly, the tumor cells infiltrate along an intact basement membrane and replace the non-neoplastic bile duct epithelium. Secondly, the transition between the tumor cells and the native biliary epithelium was abrupt and hyperplasia/dysplasia was not seen. Thirdly, the morphologic features of the liver and intrabiliary ductal tumor were reminiscent of colorectal cancer. In addition to the intraluminal and intraepithelial extension as described by Sugiura et al., Minagawa described metastatic colorectal tumor as showing papillary growth in the bile duct (10). According to Okano et al., in most cases macroscopic bile duct invasion tends to be a better differentiated adenocarcinoma with less vascular involvement compared to microscopic bile duct invasion (3).

The systematic literature search on resection of CLRMs with biliary invasion revealed a large variability in 5-year survival rates, ranging between 33–80%. The large variation may in part be explained by differences in study populations, with some studies including any patient with intra- or extrahepatic intrabiliary growth in the analysis. The postoperative morbidity (40%) and 90-day mortality (10%) in our study was acceptable, and seems comparable to outcomes after major liver resection of hilar cholangiocarcinoma (15). The median overall survival was only 19 months and remarkably lower compared to a median survival of 106 months among patients treated without biliary resection. This difference, which could be attributed to the high percentage (50%) of R1 resections among patients with biliary invasion, was however, not found to be statistically significant, due to the small size of the study group.

This retrospective study is limited by the small number of patients. However, CRLM with biliary invasion is relatively rare. There are two reasons why the number of large resections for CRLM in this series is relatively low: (I) many patients with CRLM are resected using parenchyma sparing techniques, i.e., multiple local or (sub)segmental excisions rather than major resections; and (II) as we are a national referral center for intrahepatic and hilar cholangiocarcinoma, most major liver resections have been performed for these diagnoses. The latter also explains our interest in the more uncommon biliary obstruction caused by CRLM. The present study summarizes all available literature data in the systematic review, and comprises the first case-cohort analysis that compares outcomes after resection of CRLM with and without biliary invasion.

Major progression has been made in the possibilities of liver surgery over the last decades. In this study, we have shown that patients with CRLMs with biliary invasion are distinct in a large group of patients with CRLMs. These metastases can present with central hilar biliary obstruction and should be treated with combined liver and extrahepatic bile duct resection according to strategies used in hilar cholangiocarcinoma. However, survival in these patients tends to be worse compared to patients having undergone resection for CLRMs without biliary invasion, possibly due to a high rate of non-radical resections. Therefore, it seems preferable to select only patients for surgical treatment if radiological staging predicts a high chance of a radical (R0) resection. Future research is necessary to obtain more knowledge on the biology of this manifestation in terms of growth pattern and prognosis.

Ethical Statement: The study was approved by institutional ethics board (NO. IRB00003512).